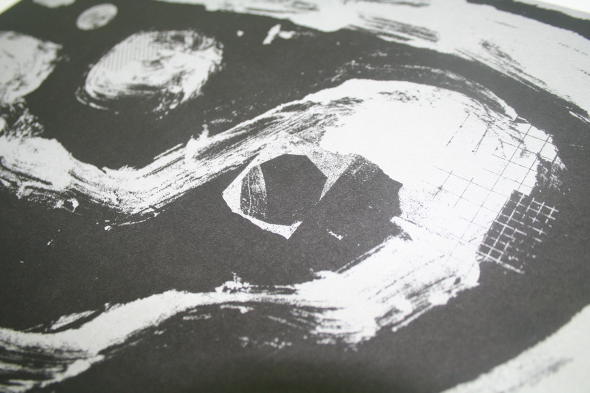 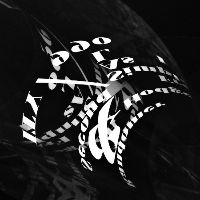 Following the head-spinning output of 2015, it’s been a while since we last heard some fresh material from Hodge. Randomer, meanwhile, has been fairly productive this year with outings on Clone and Dekmantel to name but a few, but it’s also been clear through Hodge’s enthusiastic use of social media that the two producers have been getting together in the studio a fair bit recently. This partnership has now manifested in a release for the Livity Sound reverse label, and it’s everything you would want from such a meeting of artists and imprint. The percussive pressure runs high throughout, with all manner of chimes and thuds working into heavy-rolling club tracks that fit into the Livity canon perfectly. It’s the kind of no-nonsense, sense-surrendering body music that the modern age requires for true dancefloor abandon.
Listen/buy vinyl 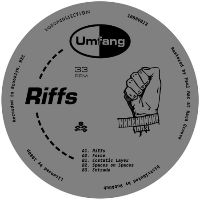 Having previously popped up with a tape LP for 1080p last year, UMFANG returns with a frankly stunning record for the Vancouver label’s vinyl arm that leaves you grasping for a frame of reference. In some ways it’s quintessential old-skool techno in the early Peacefrog sense of the term, and yet there’s something surprising and unfamiliar about the way this promising, emergent producer uses her sounds. Brazen, bleepy synth lines lead the way, but sometimes they echo out into empty space or elsewhere they get waylaid by heavy-handed filtering. It’s a dusty sound quality that lingers over the whole of Riffs, which no doubt helps in creating this nostalgic sense of techno gone by, but in the uncompromising, stripped bare approach of her arrangements UMFANG has created a record that feels just as futuristic as those old bangers did 20 years ago.
Listen/buy vinyl 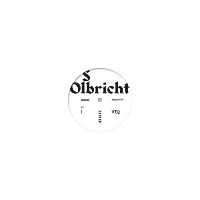 It may be just three releases deep but already Lee Gamble’s UIQ label has positioned itself as much more than an artist’s vanity project. The less familiar talents of Zuli, N1L and Lanark Artefax have come to light already, and each producer thus far has displayed a potent flair for unusual routes through experimental electronic music without losing a club pulse. Budapest producer S. Olbricht is perhaps marginally more established than those other names but still manages to present material that sounds like something special for the label rather than just another release. The complex textures and off-kilter sequencing of “J UC” is a prime example of the forward-thinking flamboyance that seems to be typifying UIQ of late, and long may it continue.
Listen/buy vinyl 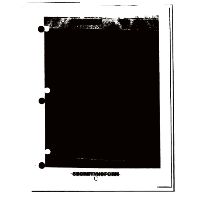 It’s safe to say that Alessio Natalizia has been busy with his Not Waving project. Commenced in the downtime between Walls albums, Not Waving has become a prolific concern for the London-based Italian with a bounty of cross-format albums on the Ecstatic Natalizia runs with former bandmate and label partner Sam Willis and beyond. Already this year we’ve had the seismic arrival of the Animals album on Diagonal, and now Natalizia returns to the harmonious tones of one of his earliest Not Waving documents, Redacted, for a fresh vinyl edition. Originally issued on tape back in 2012, the eight-track album deals in all manner of shades of synthesised expression, from delicate soliloquies to EBM-channelling thudders, all shot through with that curious punky attitude that seems to pervade in Natalizia’s current work. Whether it’s brutish rhythm tracks just shy of the dancefloor or brightly coloured ambience you’re after, Redacted has enough to suit a rich spread of moods.
Listen/buy vinyl 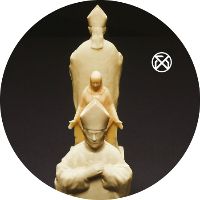 You can often find the work of Alex Barnett lurking around labels such as Blackest Ever Black, where he’s regularly spotted in collaboration with Faith Coloccia. He’s got plenty of other outings under his belt for cult tape labels such as Nihlist, but last year he inaugurated the SCRAPES label with the Extended Communications Technique cassette under a new moniker – Champagne Mirrors. Silent Servant has clearly been hip to this development and have seen fit to reissue the six-track release as the latest Jealous God issue, and with good reason too. As you might imagine from such a situation, the Champagne Mirrors sound is a lo-fi, industrial-tinged blur featuring mean tempered drum machines and errant synth lines, with plenty of distorted vocal mess bleeding into the mix as well. It’s a mildly disturbing ride, but loaded with playful effects tweaking and confrontational attitude to make it mightily compelling as well. A fine way for Juan and co. to commence the final chapter of Jealous God.
Listen/buy vinyl 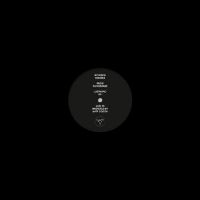 Always a label adept at industriously bridging the gap between noise rock and techno, Downwards set their sights on Australian band My Disco and call in the heavies for remix duties. Regis is on searing form as he tackles “Our Decade”, turning out a clanking locomotion of percussion that moves slow but hits heavy. There’s serious depth to the range of metallic tones he employs in creating this monster, letting the squall of My Disco’s guitars wail around inside the rhythmic prison. Lustmord meanwhile weaves an epic tale that starts off in brooding corners before opening into a chugging thrash of raw guitars and drums draped in illustrious wraith-like drones. It’s a record for the darkest of hearts, as you would expect from Downwards and their invited guests.
Listen/buy vinyl 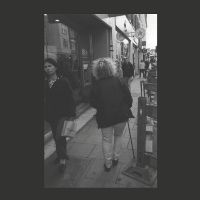 Swaggering out of the underground with a raft of tape releases behind him, Nick Klein is in danger of sneaking himself onto the radar as his wares turn up on more and more labels. Last year he delivered a 12” to Unknown Precept, and he was recently spotted sharing a 7″ with Maoupa Mazzocchetti for Entro Senestre’s BANK Records NYC, and now Luke Younger has invited him to throw down some more of that leftfield techno muck for Alter. It’s not a record for the faint-hearted as rasping sheet metal meets with distortion, feedback and unforgiving beats, but therein lies the power of this music. Indeed everything seems pitched towards sonic annihilation in the finest industrial tradition, not least on the seething “Do You Want To Crash?” Even when the melodies do come sneaking in, they’re strained against the malevolence of the overall production, making this a record for the toughest girls and guys out there.
Listen/buy vinyl 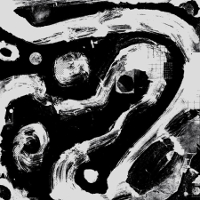 Some artists simply have the gift of being able to make the utterly unusual sound totally compelling. Yoshinori Hayashi won over all and sundry with his The End Of The Edge EP for Going Good last year, catching a groove that was fuelled by free jazz, Fourth World and psychedelia. On this first release for JINN, it’s good to see that the surreality is intact, and even better to see that it has manifested in even more surprising material. Designed to be heard as one continuous piece, Hayashi’s productions are quite exquisite in isolation. “Waterwheel” draws on geographically non-specific folk sounds and somehow working a staggered, hand played drum hit somewhere in the middle to give a distinct funk to what should by rights be utterly funkless. By way of contrast, “Playing” truly is very funky indeed with its loose-limbed break and slinky bass, but it’s by no means a normal song. If his first record set the bar far out, then Hayashi has done a fine job of pushing it further still on his follow up. And there we have that flipside remix from DJ Sotofett… JINN have really spoiled us with this 12″.
Listen/buy vinyl 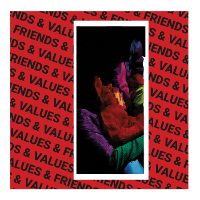 Having started out in 2007 and brought to light some major players in the modern house and techno fraternity, Oskar Offerman’s White label bows out just shy of the decade mark with a compilation that seeks to celebrate the family-like spirit in which it operated. Vid Vai, who previously dropped an EP on the label in 2013, serves up a melodious minimalistic delight, and late arrivals Julian Chenaux and Patrick Klein unfurl a refined, bumping kind of deep house. Offerman himself appears alongside Hasso to drop the peppy, techy “Saepko”, while Edward, arguably the label’s poster boy if there is one, resides over the sixth side with the sprawling ambience of “Planets.” Its richly textured drones, swirling feedback and plucked notes make for a suitably epic and thought-provoking end to a much loved label.
Listen/buy vinyl 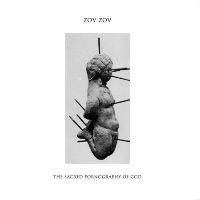 After Broken English Club’s limited 7” release, Oliver Ho’s fresh-faced Death & Leisure label wastes not a moment in throwing down this powerful slab of hardline electronic noise from the outer reaches. This time Ho has called on his Zov Zov collaboration with Tommy Gillard, and it finds the UK veterans indulging the wildest freeform of musical fantasies. There’s a tacit feel to the music on The Sacred Pornography, caught between the organic world and the electronic. Ho has crafted a visceral experience where Badalamenti-style woodwind takes on a nightmarish tone and another fiendish clang of ferrous reverberation is just around each corner. While it may be challenging, it’s also highly engaging and imbued with a sense of soul, however charred that soul may be.
Listen/buy vinyl