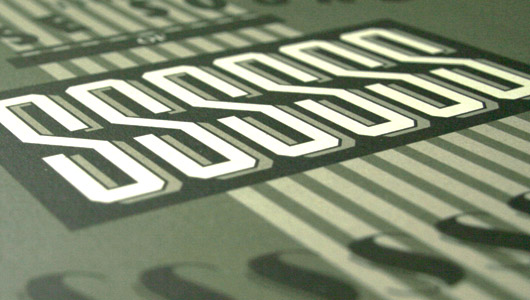 So, Fabric are releasing an energy drink, Hypercolour have teamed up with KFC, Burial’s third album is on the way and you can now eat the Metro newspaper. Eh? Ah? With all the best April Fool’s jokes already taken, we’ll use the latest This Week At Juno column to focus on the tunes.

In a week where DecaRhythm duo Bloodman and Orphan101 mixed our latest podcast there was plenty of a similar nature to get your vinyl grabbing mitts on. David Kennedy officially signed off from one alias as he fully introduced us to another – his expert melding of the S-X grime anthem “Wooo Riddim” with “Glut”, his Hemlock turn as Ramadanman, was pinched from the recent Rama/Pearson Fabric mix and slapped on the A Side of the latest Butterz white label. On the same day the first original material from the Chicago House legend that is Maurice Donovan arrived in the sleeve you see above courtesy of Hemlock offshoot SSSSS.

Elsewhere, Modeselektor came through with the Afro-European terror crunk of “Monkeyflip” replete with a deranged remix from Boys Noize, whilst the long overdue partnership of Peverelist and Hessle Audio was just as good as you would expect, and Hyperdub followed up that Burial record with a twelve inch sample of what to expect from the forthcoming Kode9 & Spaceape album.

2562’s beautifully illustrated third album Fever arrived on heavyweight vinyl with the heavy sampling of the disco records a young Huisman listened to expertly hidden by some truly brilliant production. His compatriot Martyn unveiled the first stage of 3024’s two tier West Country takeover with some  slow burning delights from Julio Bashmore – head straight for “Ribble To Amazon” – and on a similar note Hotflush boss SCB dropped some classic deep house strains for Will Saul’s AUS.

Slipping in yesterday was the double dose of Livejam meets Moodymann brilliance with Appointment from the Berlin crew offering up two drastically varying takes on “I Can’t Kick This Feeling When It Hits” that brilliantly veer far off the track of Kenny’s timeless Chic leaner. Those who like Livejam might be pleasantly surprised at Ashley Beedle’s remix of Stac on Wah Wah 45s, which puts aside his most recent disco direction for a thumping Sound Factory style 4am endeavour. Shout outs to Ethereal Sounds for being the conduit for Cristopher Rau’s continual purple patch with two melodic jackers for their Background Series – “Onion Smell” contains the best sounding kick drum we’ve heard since Uncle Pepe dropped “Deep Burnt” way back!

Our obsession with the Sandwell District collective continues apace with Silent Servant offering up a pulsating, rasping refix of Raster Norton’s Mokira on the first of three limited edition 10″ releases from the Kontra stable and Mathematics came through with some more alien lo-fi box jams courtesy of Japanese correspondent Takeshi Kouzuki.

Amidst the weekly raft of disco edits (can we get an edit amnesty soon please?) Caribou under his new Daphni alias, the latest Let’s Get Lost from label boss KZA and COMBI’s O & P shaped stop on the edit alphabet at least demonstrated some ingenuity. Still under the disco banner but dripping with originality are the Nacho Patrol album sampler – typical genius from Danny Wolfers – and the latest slice of idiosyncratic disco from the Leng imprint with Idjut Boys and Tuff City kids remixing German balearic types Mountaineer.

Over in the world of mp3s the rather excellent debut release from recently crowned (and hard to pronounce for some) one to watch Taragana Pyjarama arrived early – do check the sumptuous remix from Merok duo Teengirl Fantasy. Not to be outdone, Rush Hour also sneaked out Tom Trago’s brilliant second album Iris on digital a week before its physical release. The digital arrival of the Detroit meets Glasgow in the dancehall thump of Marcellus Pitmann’s The Eastside Story on Seventh Sign and GHL’s Slow Good via Electric Minds shows that sometimes vinyl comes first too!

A special mention also goes to our man in Banff Eddie C, who dropped a delicious album on Endless Flight. The Teddy Pendergrass sampling “Do It Yourself” is our pick of a very impressive bunch!