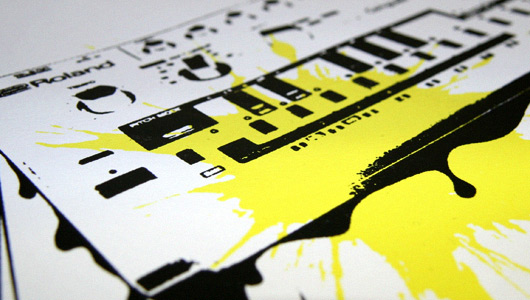 Whilst Monday’s suggestion of retiring to the nearest park shaped area with a portable turntable, some laptops  and refreshing beverages to cover the weekly Juno Plus editorial duties seems to have fallen on deaf ears, some consolation was found in getting to listen to so many great new releases.

While we still have a chance we should mention the super special Adalberto/Fatjack reissue and new Fatjack twelve that just arrived from the excellent Automatik Datamatik. The label’s releases don’t tend to remain in stock for very long and given that both the new arrivals are presented in specially designed artwork – with the reissued release adorning the top of this page – means these two fine examples of lo-fi electro rawness probably won’t be here come Monday morning.

The return of Norse icon Todd Terje with a splendid EP for the Running Back imprint was an early highlight this week – not least for the limited edition recycled picture sleeve art and the subtle ode to Debbie Harry and co that pervaded one of the tracks. Running Back have also released a number of twelves that come in a more standard housebag, so be quick if you want that neat cardboard finish.

Also listed under disco and kinda of blurring the boundaries was the excellent pairing of London sonic terrorists Factory Floor and Glaswegian musical experts Optimo Music, we’re still debating whether the original of “R E A L L O V E”  or the JD Twitch remix is better – what do you think?  The first of several Blondes releases on RVNG INTL also made us swoon severely and wish we had colour synesthesia, whilst BBE came correct with an exercise in treating the DJ right with some plush double vinyl samplers to accompany their second John Morales retrospective compilation.

Within the realm of techno there seemed to be some kind of unspoken agreement to unleash a mass of rough, raw and rattling techno twelves this week as releases from Reggie Dokes, Marcelus, Gesloten Cirkel and the welcome if unexpected revival of Antidandruff all had us pining for some 4am warehouse action somewhere in East London. Factor in releases from Dinky on Ostgut, a timely reissue of some vintage 93 Robert Hood, more Silent Servant heat on new label Modularz and monumental debut albums from Instra:mental and Skudge and it’s been a fine week for das vinyl techno.

Tom Trago’s genre splicing new album Iris made it out on double vinyl with perhaps a lucky few getting a Wonka style treat in the form of the limited  glass vinyl editions that sneaked out of the Rush Hour distro plant. The long overdue second release from Glasstable arrived with the Soul Clap and Catz N Dogz tag team productions adorned in suitably risque artwork and on some ghostbusting picture disc action.  The debut We Play House EP from Sebastian San, Marvin Belton leading the Joy Of Sound project on KDJ’s Mahogani imprint, some more Bunker heat from Perseus Traxx and the third round of  delightfully weird and diverse sounds of Dresden courtesy of the Uncanny Valley label were the highlights in the deep house pile.

2562’s Feverish transition to mp3 format, the arrival of Move D’s excellent Hydrophonic EP for Uzuli along with the Lady Blaktronica Remix EP and the aforementioned Dinky on OstGut will please those who stand behind NME’s Rick Martin in the physical/digital debate.

The second Messages From The Void compilation released courtesy of Ali Renault’s sterling Cyber Dance label sneaked out on CD format earlier than the vinyl release and is worth picking up for the massive Brassica track alone! Other CD shaped treats include the plump 5 CD Autechre set, that Instra: mental album and a selection of previously vinyl only edits from the Disco Deviance camp.