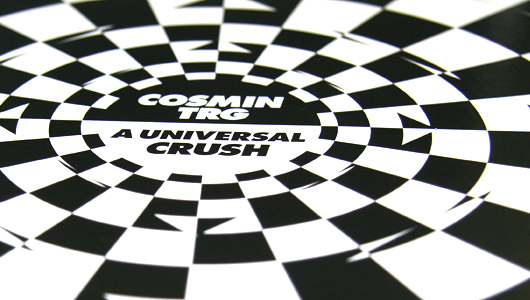 It’s nice to imagine that in some vast, underground chamber in a darkened corner of London, away from the prying eyes of the music press, sits a secret society.

Dressed in a long cloak, chairman of the board Richard D James convenes a round table consisting of Burial, Four Tet, Kode9 and Thom Yorke – Boards of Canada sometimes jump on the train down from Edinburgh, Joy O is in charge of making the tea – and from here they speak in hushed tones and plot on an unsuspecting world the next release to arrive out of nowhere.

A Burial/Four Tet/Thom Yorke collab released at a few days notice? “Easy, watch this,” cackles Kieran Hebden. The first Burial solo material in four years, announced on a Wednesday and released to the record buying public barely 24 hours later? “Consider it done,” whispers Steve Goodman, eyes narrowed. And so this week us mortals were treated to the sonic excellence of Street Halo, which we recommend you check out here.

Of course that was just one of many releases to arrive at Juno HQ in a week that London finally broke the shackles of a bitter winter; notable among the rest was the sight of Direct Current regular Cosmin TRG returning for his third release on the Rush Hour series. Spread luxuriously across two harlequin themed twelve inches, the Romanian’s continual development from his dubstep roots towards a fluid house and techno sound was more than evident here, with this potentially his best work to date.

Arriving just in time to soundtrack the Juno lunch hour in the midweek sunshine was a three track excursion from Diynamic boss Solomun to launch the 2DIY4 offshoot, while the Belgian purveyors of esteemed discoteria known as Eskimo revisited Bottin’s fine contribution to their recent output – calling in some excellent producers to add their own slant to “Discocracy” and “August”.

Serial Juno Plus favourite Lone debuted on the R&S imprint with a packed double twelve inch release that demonstrates a growing maturity in the new sound the Nottingham based producer unveiled on last winter’s impressive Emerald Fantasy Tracks.

Special mention should also go to Australian producer Inkswel, who dropped some heat on the fledgling Boogie Bash imprint. For us it’s is all about the sultry boogie flex of B-Side opener “She Likes Techno”, featuring Reggie B – who performed a killer vocal turn on Onra’s “High Hopes” last year – and Kid Sublime on keys.

Deep house beardos will be pleased to note new arrivals from Theo and Kenny; the latter remixed by youANDme, the former dropping a 12″ single plucked from the recent Sketches album. On a techno tip, Niels Luinenburg (aka Delta Funktionen) and Samuel van Dijk (aka Mohlao) joined forces as Inward Content for some muggy helpings of dub techno on Meanwhile Records, and if you’re at a loss for a suitable example of raw and heavy 90s rave revivalist tackle then we suggest you look no further than “It’s A Love Thing” by Heads High.

Still very much in its infancy, DJ Koze’s Pampa has delivered with every release, spanning off kilter seasonal acid freakouts courtesy of Nathan Fake to the reinvigoration of Robag Wruhme. The latest release sees Chrstopher Rau step up to the plate and just like previous incumbents of a Pampa cat number the Smallville stalwart excels!

Over at Juno Download it was pleasing to see Mike Dehnert’s excellent Framework album enter the digital fray, while Perc and Italian producer Giorgio Gigli teamed up for a release on Speedy J’s label in a match made in underground techno heaven.

Elsewhere London imprint Pictures Music reached out to Glasgow for their latest release, with 19 year old Koreless – currently being feted by the Young Turks and Hessle Audio stables – matching the label’s previous output in terms of quality. Our favourite compilation this week came from the Light Sounds Dark camp, who served up a bizarre but brilliant mix of coldwave oddities, progressive disco-rock, scratchy psych-folk instrumentals and far-out synth-funk grooves.

Oh and how could we forget the Fudge Fingas album? True basement soul from the Firecracker don, released on the Prime Numbers imprint. It’s eclectic, no doubt, but thanks to Sutherland’s delicious production and strangely distant vocals, Now About How hangs together marvelously.

Meanwhile on the CD front we were pleased at the arrival of the Dog Eat Dog album from Claremont 56, who trawled through the archives of the cultish 80s NYC punk funk act and gathered up a selection of previously unreleased material. And if all that hasn’t quenched your thirst for all things music, we suggest you check out Richard Brophy’s excellent investigation into the abstract techno resurgence here.