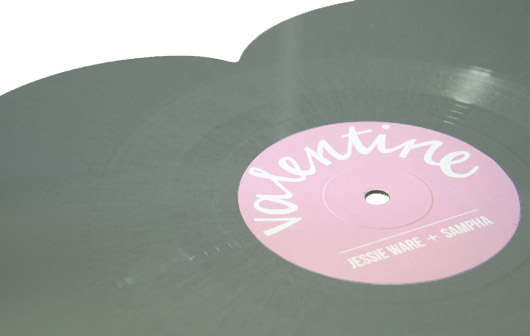 You could feel the love here at Juno this week, as the lead up to Valentine’s Day saw a sprinkling of lovingly crafted vinyl releases – most notably this heart shaped record from Jessie Ware and Sampha on Young Turks (pictured above).

Aww. Not far behind in the artwork stakes – or should we say steaks? – was this amazing picture disc from boutique disco imprint Public Release, with French producer Blackjoy unveiling his new Joie Noire alias for the occasion.

Bill and Frank over at DJ History gave music nerds the aural equivalent of several candlelit dinners, unleashing four 12″s brimming with re-edits of classic Trax material. Whilst each sampler is worth investigating, it’s perhaps the third volume that screams essential the most, by virtue of the presence of JD Twitch, Andy Blake, Richard Sen, Toby Tobias and Hardway Bros as the resident re-editors.

Linking German producer Kassem Mosse’s brand of raw, thumping house/techno to anything romantic would prove tenuous even for creative sparks such as ourselves – no matter though, because his new 12″ for the excellent Workshop imprint speaks for itself.

Elsewhere R&S picked up where it left off in 2010, and it was a near exercise in futility to try and separate the two remixes of Model 500’s “OFI” and proclaim one the winner, as both submissions from Bullion and Space Dimension Controller were teeming at the brink with ideas that radicalise the template of the original.

And over at Ramp two of electronic music’s most exciting talents converge on one stunning record. New Yorker FaltyDL turns in the original cut here, with “Hip Love” serving as the perfect diversion for those of you eagerly awaiting his upcoming album on Planet Mu. Jamie xx took care of business on the B Side, stripping “Hip Love” of its intricate percussion and turning it into a low end roller with bass frequencies that’ll have nightclub sound engineers waking up in cold sweats.

Those who like some techno on their cornflakes will be pleased to see Stroboscopic Artefacts label chief Luca Mortellaro, operating under his Lucy pseudonym, release a remix 12” in anticipation of his debut album due out in March. Beelines For Working Bees sees a nice mix of established and nascent techno talent – namely James Ruskin, Tommy Four Seven, Peter Van Hoesen and Truss – rework four album tracks with considerable aplomb.

Meanwhile the zeitgeist stalkers among you will be aware that Joy Orbison is now Joy O – for one record on Hotflush at least – while Ramadanman will use the ‘Chicago house legend’ Maurice Donovan alias for a second time on an upcoming 12″ on Untold’s SSSSS imprint.

Chicago legend Rahaan was ubiquitous across all formats this week – a Stilove4music digital release here, an cheeky 12″ there and, perhaps best of all, an unmixed edits CD. Elsewhere in the digital domain, Chaim’s album for BPitch Control was imbued with a distinctive shuffle and melodic warmth that gives it real emotional resonance, while James Ruskin’s remix of Bob Hood popped up on M Plant, and yes, it’s amazing, thank you for asking. There was also a nice compilation from Tirk offshoot Nang that gathered together a mix of favourites and obscurities, throwing up some real slept-on gems amongst the hits.

In addition to the aforementioned Rahaan edits, you could also find the debut Nicolas Jaar album on compact disc, which seems to have been spared the intense scrutiny afforded to Jim Blake’s debut that dropped last week.