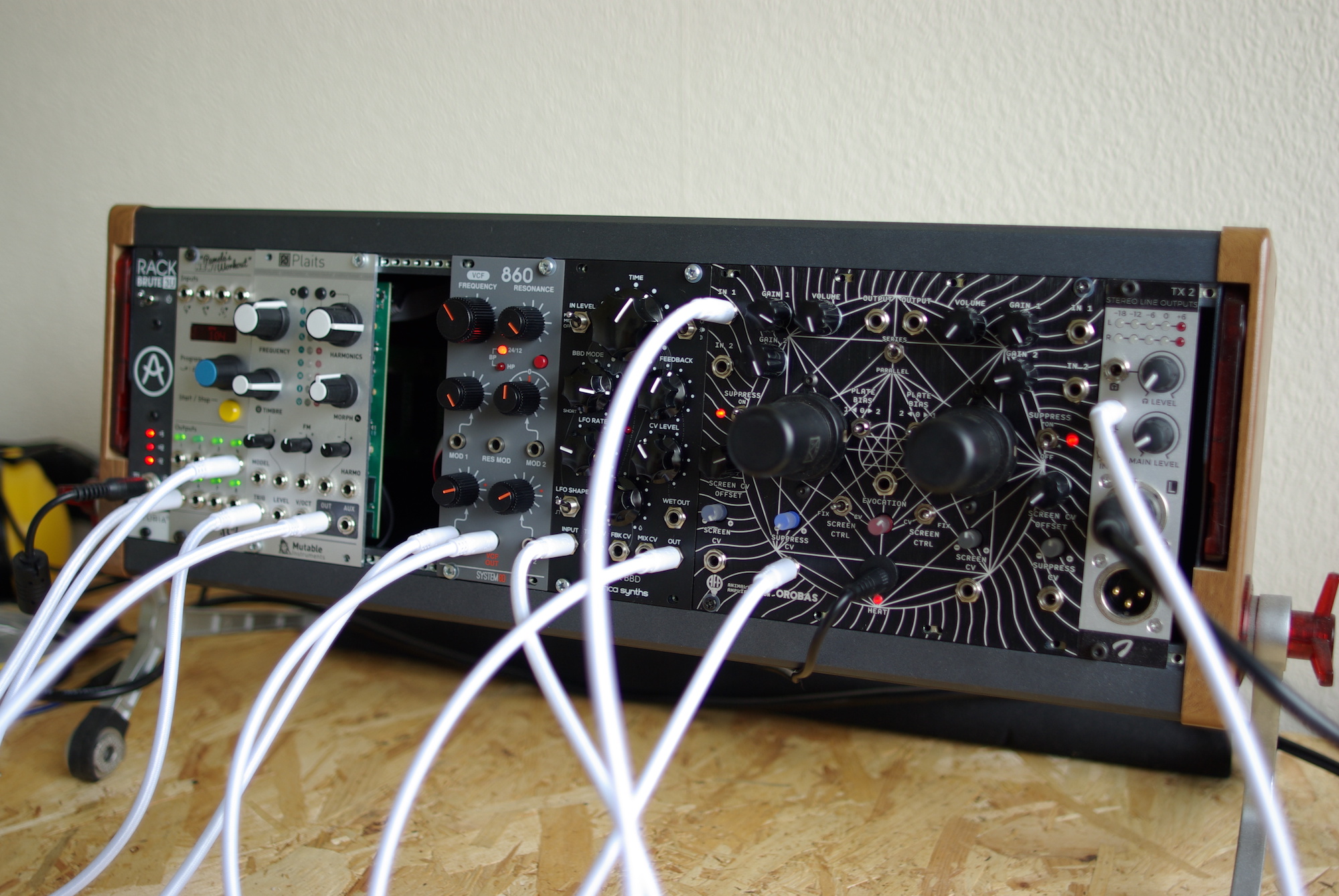 Animal Factory’s Orobas stands out this month for a lot of reasons. Even by the eclectic standards of Eurorack, this is a module which does things differently; you know you’re looking at something special as soon as you open the fancy shipping box and slip the new-old-stock RCA 6SJ7 valves out of their fabric pouch.

Animal Factory describe the Orobas as a dual VCA first and foremost, but that’s almost painfully reductive. The unique design is based on that pair of ‘sharp-cutoff pentode’ valves, whose design and use for audio amplification can be traced back to the earlier 6J7 valves of the 1930s. They’re used here to create a versatile dual-channel amplifier module which proves to be so much more than a VCA, thanks in part to the ability to run the two channels in parallel, series, or with one feeding back into the other. It’ll do duty as a standard VCA, a four-channel valve mixer, mild saturation, or even compression with a sidechain input. Things get most fun when you start to push into dirtier distortion, either by switching the plate bias to different settings or exploring the Evocation function, which feeds the output of the second channel back into the first to create some beautiful filth.

The Orobas is strictly limited edition, partly due to the scarcity of the vintage valves. It’s fairly pricy, but you’re getting a hell of a lot for your money, not least the fact that it feels special to use. Inspiring stuff. Don’t sleep on it.

You can always on our friends in Riga to turn out the goods, and this month is no exception. The latest offering from Erica Synths HQ is the Black BBD, a unique delay module based around analogue bucket brigade device lines, which give a distinctive colour and tonality to the effect. It’s a module that urges you to tweak and perform in real time, crossfading between the two uneven-lengthed delay lines for multi-tap style effects, pushing the feedback into weirdo drone territory. As usual for Erica Black Series modules, there are plenty of CV inputs to control and modulate thing. For best results, team it with the Black Joystick 2 to give full hands-on creative potential with the option to record and repeat modulation patterns.

A few more of this month’s best releases fall under the category of simple, effective essentials. To call them basics would be unfair, but LFOs, filters and mixers are such staples of most workflows that it’s always nice to see new, high-quality options that don’t try to reinvent the wheel. System80’s 860 MK2 is a new module which replaces the Canadian brand’s 860 MK1 and JOVE modules, both of which were based on the multi-mode filter design from the early 80s Roland Jupiter-6 polysynth. The 860 MK2 is straightforward stuff: two audio inputs, filter and resonance controls, plus unipolar and bipolar modulation inputs. The point here is the sound, which is classic 80s Roland: it can do smooth and liquid or happily push into acid territory.

Likewise, the Blood Cells Audio D.O.MIXX isn’t going to shock you with a radical new take on mixing. Instead, it’s a five-channel mono-to-stereo mixer with very high quality sound, pan controls and mute buttons. The dedicated direct outputs (pre- or post-gain control) are about as radical as it gets here, intended to allow you to record individual outputs to a DAW while improvising or performing, so that you have access to individual tracks as well as the main mix. Simple, straightforward and high quality at a very reasonable price. What more could you ask?

Finally this month, the Cosmotronic Delta-V is a module that has flown under the radar for some reason. Described as a dual analogue function generator, it was originally released back in 2019 but has now been reissued in a mildly tweaked rev.2 version with a slightly more subtle faceplate design than the original version shown in the video above.

The Delta-V is, in very simple terms, an envelope and LFO generator, but the inclusion of slew generators and integrated VCAs mean it’s capable of much complex modulation. If you’re thinking that sounds a lot like the excellent Make Noise Maths, you’re spot on. The Delta-V isn’t quite as powerful as Make Noise’s wildly popular dual function generator, but it’s a bit more simple to get your head around, it only takes up half the space and it’s £100 cheaper. That makes it a bit of a bargain in our book, especially if you’re just dipping your toe into the more complex side of modulation.