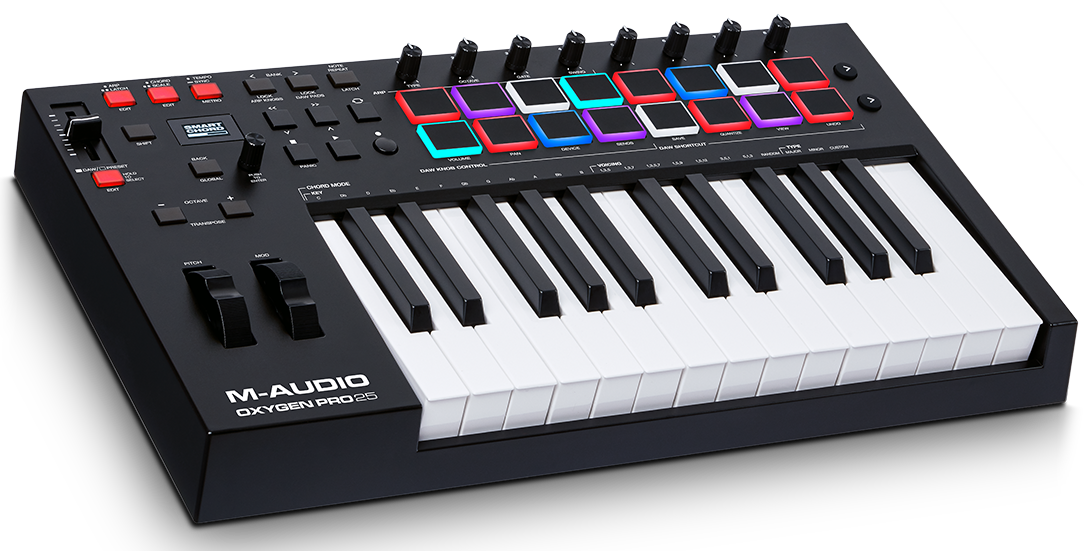 Choosing a small MIDI keyboard is all about finding the right compromise. Traditionally, big keyboards have had more features, and smaller ones have been a bit more basic. M-Audio’s Oxygen Pro series bucks the trend. Here’s a compact, 25-key model that packs in serious pro features that you’d normally expect to find on much bigger keyboards.

The M-Audio brand is as good a starting point as any given that the company pioneered the portable MIDI controller market with the launch of the Oxygen8 way back in 2002. That model was launched under the brand’s previous name of Midiman, but the Oxygen series has continued to develop since the name change, now in its fifth generation and still a go-to for affordable MIDI keyboards with tons of features. The Oxygen Pro series is a premium option, available in 49- and 61-key versions as well as the 25-key option we’re reviewing here. (The forthcoming Oxygen Pro Mini is even smaller, with a slightly different focus to the 25-key version, switching to mini keys and dropping a few pads and rotary controllers to make way for some faders.)

The reasons for wanting a small but fully-featured keyboard are numerous. Perhaps you want portability, so you can make music while on the move. Perhaps you don’t have a lot of space in your studio setup, so need to keep things compact. Perhaps you simply don’t play two-handed keyboard parts, so don’t need the extra space that a larger model would give you for two-handed playing. Whatever your reason, the idea that smaller keyboards should have fewer features doesn’t stand up to scrutiny; why shouldn’t a 25-key controller have the same feel and level of control as a bigger model?

That’s where the Oxygen Pro 25 comes in, with a feature set that just about matches its bigger brothers. Alongside full-size, semi-weighted keys, you’ll find 16 touch-sensitive pads and eight rotary controllers. There’s MIDI out over USB or a traditional 5-pin DIN plug round the back, power is taken from that same USB socket, and there’s a sustain pedal input if you need it. If there’s one notable omission, it’s the absence of faders. Looking at how many controls are already packed onto the top panel of the keyboard, you can understand it would be pretty much impossible to fit in any more. As such, if you want faders you need to look to the Oxygen Pro 45 or Mini, trading off compactness or full-size keys depending on which direction you go.

The feel of the Pro 25 is immediately impressive, from the build of the case itself to the positive feel of the keybed, the response of the pads and the precision of the rotary pots. But it’s actually the extra features that really make the Pro 25 feel like a premium model, going beyond the basic controls to offer high-end features including an arpeggiator, chord mode and pre-defined scales. It’s also worth nothing that the Pro 25’s DAW integration is thorough and well implemented, allowing you to control the most popular options including Ableton Live, Logic, Cubase and GarageBand, among others.

All in all, the Pro 25 is a proper all-rounder that feels like a high-end model which just happens to be a bit smaller than what you’d normally expect. At £149, it’s substantially more expensive than the £90 RRP of the forthcoming Oxygen 25 (non-Pro model), but the step up is significant. The compact size and two-octave design work well for playing single-handed chords and melodies, while the overall feel and comprehensive feature set give all the Pro models a true premium feel. The 25-key version strikes the perfect balance for those who need a smaller controller, proving that you no longer need to choose between size and power. 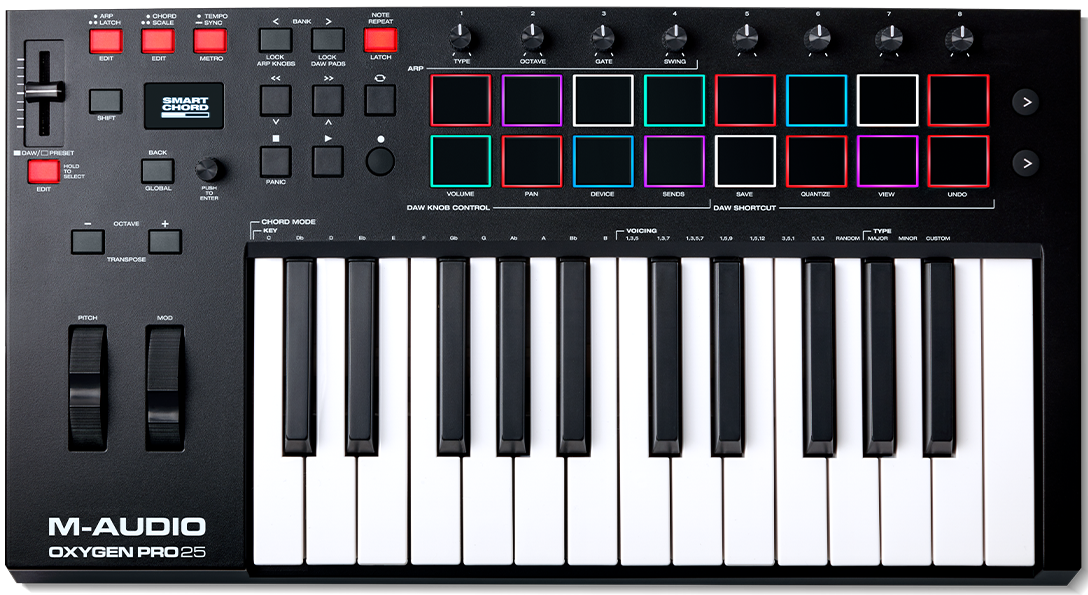