Pioneer’s latest scratch mixer is a Serato-compatible powerhouse that makes a very appealing alternative to the more expensive S9 and S11 models. 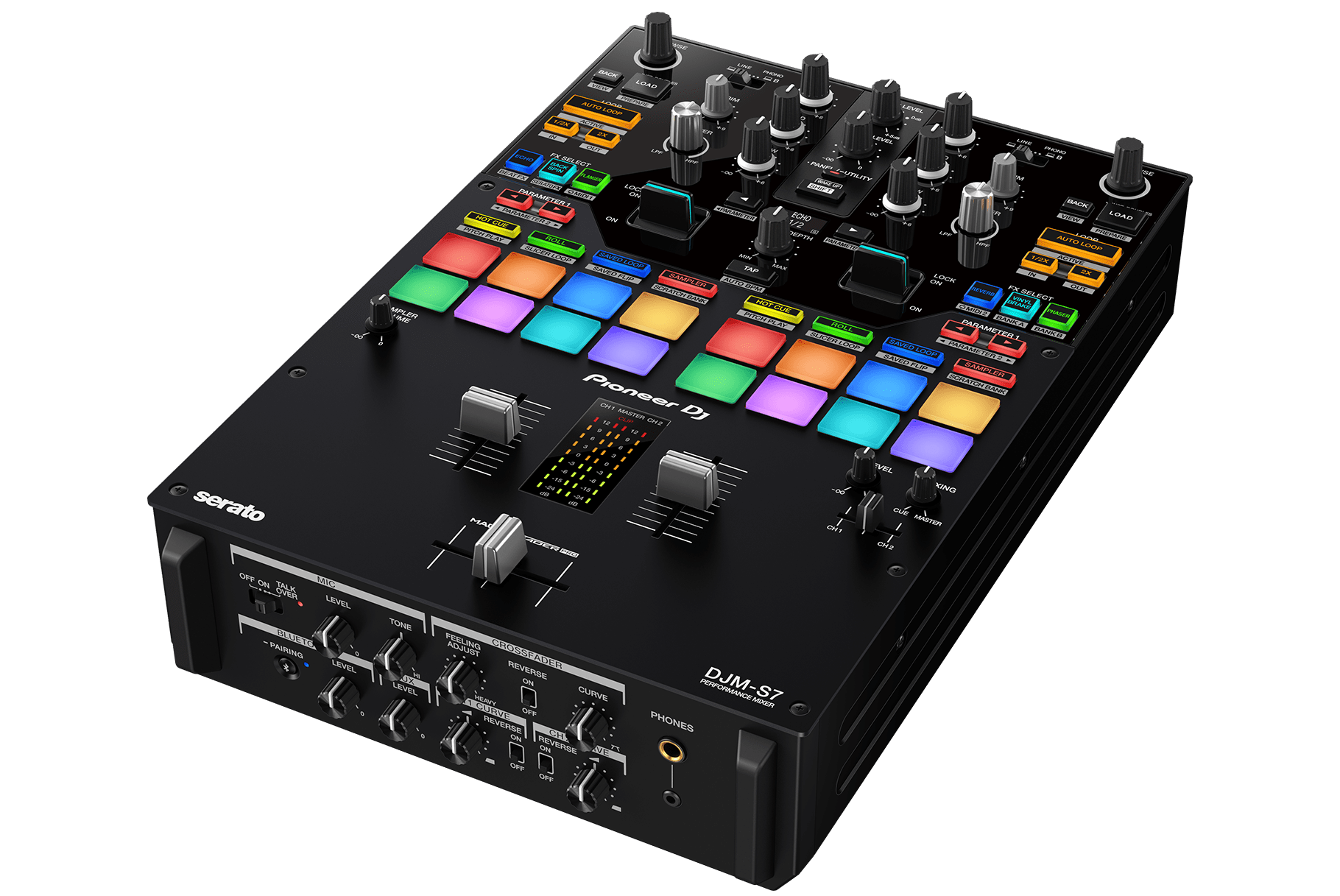 In recent years, Pioneer’s DJ mixer range has been steadily upgraded and refreshed. Most attention usually falls on the more conventional club-style mixers such as the flagship DJM-V10, but the DJM-S range of scratch-style battle mixers has also been comprehensively overhauled starting from the top with the DJM-S11 that we reviewed last year. Numerically, the new DJM-S7 joins the range below the existing DJM-S9, although it’s not necessarily the case in practice that it’s a lesser product. The S7 is around £120 cheaper, but as the newer model it may actually be a better option than the older S9.

As we’ve come to expect from high-end Pioneer DJ products, there’s very little obvious difference in materials or build quality compared to the top-of-the-range DJM-S11. Instead, it’s more a case of the S7 having a slightly pared-down feature set, albeit with a couple of interesting features that set it apart from its more expensive sibling. Visually, the two models are very similar and the approach is fundamentally the same: both are two-channel designs with three-band EQ, Magvel Fader Pro crossfaders and eight multi-function RGB performance pads per channel. The biggest difference is, of course, the lack of a screen on the S7. How much that matters depends largely on your personal preference in terms of whether you’re happy to look at your laptop screen for visual feedback whenever necessary.

When it comes to software, the S7 is compatible with Pioneer’s own Rekordbox software (and works as a Hardware Unlock device for it), but in practice we’d expect most users to go with Serato DJ Pro given its popularity among turntablists. Sensibly, Pioneer have focussed heavily on Serato integration here, and the S7 unlocks the software as well as working seamlessly with it.

Unsurprisingly, the S7 doesn’t match the S11 exactly in terms of features and functionality, but it does inherit some of the standout features of the flagship model, including Combo Pad mode, Scratch Bank and Gate Cue. Intriguingly, the S7 also offers a new feature not found on the more expensive model: Loop MIDI allows you to send tempo-synced MIDI messages to your chosen software, triggering timed actions such as hot cues, samples and key changes using the paddles or automatically triggering them on the beat when the paddles are locked on. It’s a really good, creative option that adds a lot of value to the S7. The other main feature that sets the S7 apart from its bigger brother is the inclusion of a Bluetooth connection to stream wirelessly from mobile devices, although this seems notably less useful to scratch DJs than the Loop MIDI feature. Its main purpose is probably to stream a playlist between DJ sets in a bar setting, or perhaps just for casual listening in a home DJ setup; it’s unlikely to be a major selling point for many potential buyers, but it’s nice to have.

The competition is now impressively strong at this price point. Rane’s Seventy is priced almost identically to the S7, while the slightly cheaper Reloop Elite has been around a couple of years now but can still just about hang with its newer rivals. All three mixers have their own strengths and weaknesses which largely come down to personal taste, so it’s not really a case of the S7 beating either of its rivals. Curiously, the main rival the S7 will probably draw a lot of buyers away from is Pioneer’s own DJM-S9, which is slightly more expensive and now looks a little outdated by comparison. As awkward as that might be for Pioneer, it’s a sign of just how good the S7 is.