Our series Dusted Down delves into the archive and selects another gem worthy of a second look. This time it’s the turn of LFO’s mould-breaking debut album from 1991 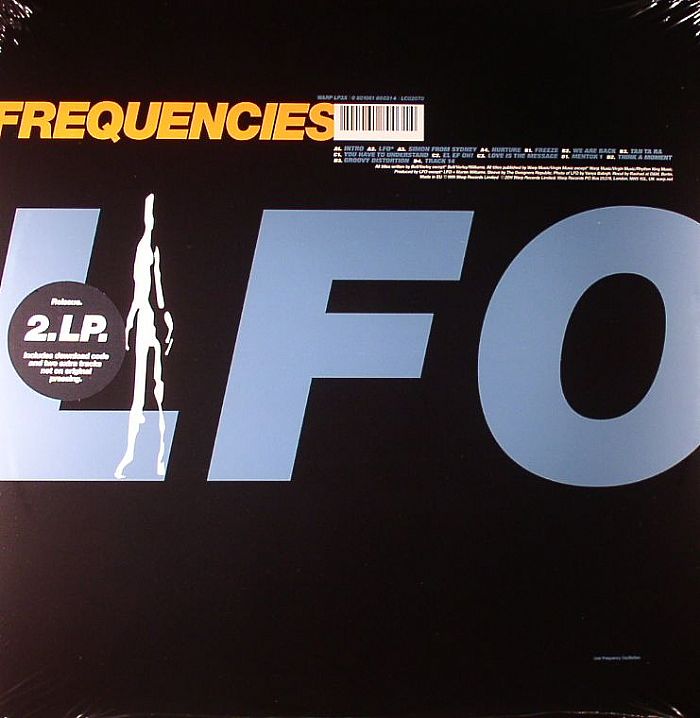 LFO aka Gez Varley and Mark Bell weren’t the first people in the British rave scene to make an album – Baby Ford, FSOL and even Guru Josh got their before them. Released towards the end of July 1991, Frequencies is, however, the first album to make serious waves above the then extremely underground underground.

It was arguably the first British techno album to be noticed, and indeed it was worthy of being noticed. Arguably, it was the first album from the scene that felt it was able to operate like a ‘real’ album, rather than a collection of dancefloor 12”s. It’s easy to forget that, at the time, most dance music was still bought via compilations, propagating the myth that dance artists were somehow faceless and meaningless, not worthy of consideration as ‘proper’ artists who made serious, grown up ‘proper’ albums.

With their eponymous single, ‘LFO’, had stamped not only their authority but also a uniquely and characteristically British, northern flavour onto techno. It played directly into the narrative of Sheffield – the home of their label Warp rather than the dup themselves, who were from Leeds – as the Detroit of the UK, true both in the sense that it had been closely associated with heavy, mechanical industry, but also that these industries were now in decline. ‘LFO’ brought the sound of bleep – in reality the simple, pure electronic sounds of synths combined with the kind of deep sub-bass previously only ever encountered on reggae and dub records – to the mainstream when it had reached no12 in the UK single chart.

Frequencies achieved a much trickier act. It established the sound as something that could work on and off the dancefloor alike. The wonderfully named ‘Simon From Sydney’, for example, with its gentle groove, beautiful arpeggios and high frequency fizzing , showed a love for Kraftwerk and Mantronix but used those influences to create something nothing had got near to. The likes of ‘Nurture’ and ‘Freeze’ were speedy and playful, definitely danceable but using a light touch where continental European dance music had felt the need to go in with all guns blazing, set to maximum heaviness.

Their influence on the work of Aphex Twin and Autechre is obvious, opening up the possibilities for cerebral as well as visceral reactions to electronica. But equally, you’ll hear drum & bass and dubstep veterans namechecking their speaker-busting basslines as being just trailblazing in their scenes.

Frequencies only reached 42 in the UK album charts, but its significance is less in what it achieved sales wise, but more about who and what it opened the door for.

Without Frequencies , one suspects, there would have been no place for Experience, the first Prodigy album over a year later, and their status as a festival headlining, chart topping band could well have out turned out very differently. There’s an even an argument that Daft Punk’s debut Homework, which saw them on the way in their journey from dancefloor filling house act into multi-million album shifting giants, couldn’t have existed without the firm, confident precedent that this LP set. It’s no co-incidence that this album’s ‘list’ song ‘What Is House’, namechecking LFO’s heroes from KLF to Brian Eno and Tangerine Dream, is echoed on Homework on the track ‘Teachers’, similarly made up of those who showed the way forward to the French duo.

Not for nothing, then, does the vocoder voice on ‘We Are Back’ declare, quite rightly, “there are many imitators / but we are the true creators.“ Frequencies Is not only the sound of history being made, the sound of the door being opened up to the UK’s numerous and now far dispersed tribes, it’s also a sound that sounds as fresh as the day it was made. It really doesn’t come much better than this.

* Frequencies is 30 years old this year