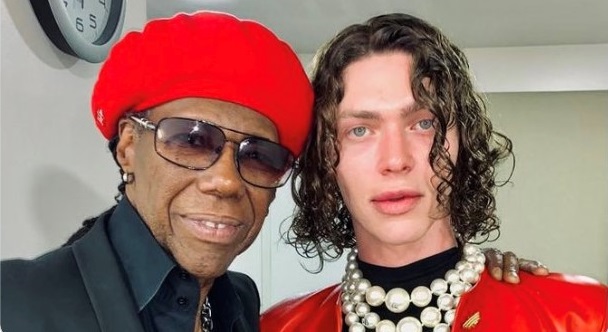 Chic guitarist Nile Rodgers has spoken out against Twitter trolls who hijacked his tribute to transgender producer Sophie, who died unexpectedly over the weekend.

Rodgers struck out after his Tweet – including a picture of him with Sophie at a concert he’d curated – was greeted with a storm of transphobic comments.

“I fail to understand how my tweet of respect and condolence for a fellow artist and human being, whom performed at a show I curated, degrades into negative and unrelated points of view.
He went on to add: “Did these haters whom seem devoid of kindness see the show or meet the soul of which I speak?”

Sophie died following a “sudden accident” at home in Athens in the early hours of Saturday January 30, aged 34. The producer – who emerged from the PC Music scene and worked with Madonna, Charli XCX and Let’s Eat Grandma and had just had a career long ambition to be remixed by Autechre fulfilled – reportedly fell from the roof of the three storey apartment block after attempting to take a photograph of the full moon. 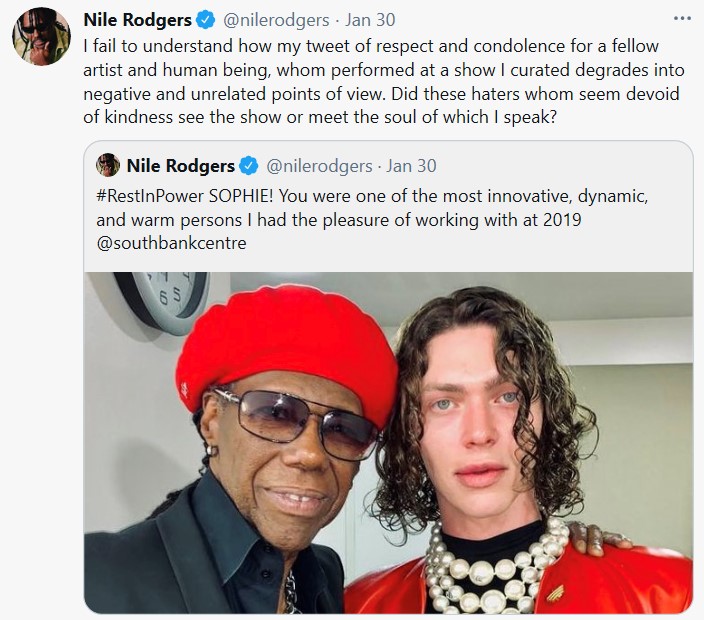 Sophie’s record label Transgressive said on Saturday: “Tragically our beautiful Sophie passed away this morning after a terrible accident. True to her spirituality she had climbed up to watch the full moon and accidentally slipped and fell. She will always be here with us. The family thank everyone for their love and support and request privacy at this devastating time.”

Transgressive co-founder Toby L said: “Every interaction with Sophie was insightful and soul-enriching. And she led the way for everyone. Today I say thank you for so many of the best conversations, nights and songs that I’ll ever experience. Sophie, you pushed your artform, and us, forwards in magical, unrepeatable ways. For Transgressive to serve as a custodian of your work is the greatest of honours. I’ll cherish the privilege, and you, forever.”

Paying tribute, PC Music’s Danny L Harle said: “Sophie was a truly holistic artist. Her influence is immeasurable and I’m honoured to have known her.”