Mother of Mars – living after The Rapture 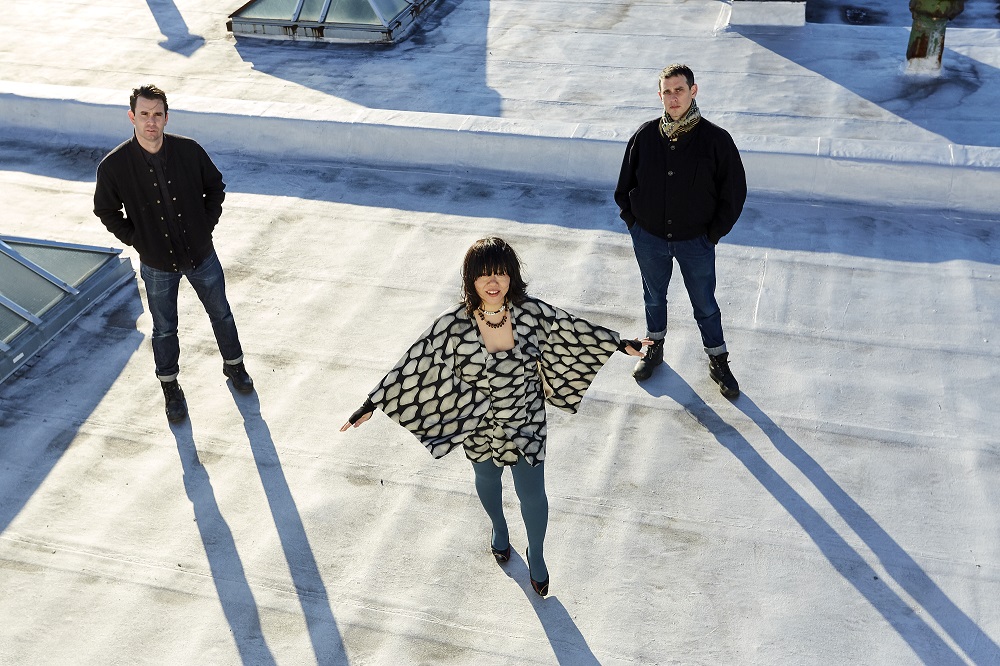 Mother of Mars aka Vito Roccoforte and Gabriel Andruzzi (pictured above with singer Jaiko Suzuki) left dance-punk band The Rapture in 2014 and became house DJs and producers under the name Vito & Druzzi. They’ve now settled into their newest ‘kosmische’ project, releasing 2017’s one-off single ‘Hera in the Valley’and preparing their debut LP I Hear for release on March 5 on on Ransom Note.

They now take on an intricately semi-live, semi-electronic crossover feel, shedding brighter light on Roccoforte’s drumming and Andruzzi’s synth chops. In our catch-up, they cover everything from the project’s inception to their thoughts on Daft Punk, musical attention spans in the Spotify era, and grass-whistling…

Gabriel: When Mother of Mars started, the main sound on our first songs were made on a Roland Juno-60 synth. It was a pretty simple sound, and the way it resonated through a delay made lots of nice harmonies and textures. It wasn’t a preset, but just a synth I called the Mother of Mars; Juno is the mother of Mars in ancient Roman mythology.

That was going to be our follow-up question, actually; how the name came to be.

Gabriel: It was sort of an accident. When the time came to name the release, the question became “what are we going to call this?” Then we put out a song called Hera in the Valley, named after the site of the Temple of Hera Lacinia in Sicily. And that’s got the same influence. It’s the Greek version of Juno – Juno’s Roman – so they’re equivalent goddesses. The Italian influence is also pretty key, Vito’s very adamant on bringing the music back to his Italian roots.

So far you’ve have put out a dance “12, but this is your first album project under the name. Did you always plan to make an album?

Vito: We share a studio in Brooklyn and have just been making music together there separately for years now. With the first 12” on Ransom Note, we became excited about the music and the direction so we made more music with that in mind.

Gabriel: As much as I like house and techno I got realy fucking tired of being in that land all day long. I think this record is a pop record, in a lot of ways.

There’s kind of a popular narrative that it’s futile to make a full-length dance music record, that it doesn’t lend well to the album format. do you agree?

Gabriel: Most dance music comes in 12” form, and the digital culture of releasing music still resembles that. In dance music, to stay relevant, you’re putting something out constantly. Omar S and Theo Parrish have made really great albums, though. I think of Daft Punk too, but they haven’t done anything good for a long time. Time has made them seem lamer and lamer.

You guys haven’t shied away from making longform music, though. No track on this album is sub-four minutes, at least. So is there any thinking behind that, or is it more just going with the flow?

Gabriel: I listen to a lot of music that’s longer-form. There’s a certain patience that it requires. When I’m in a groove I tend to make music that goes on a journey, that has lots of ebb and flow. I’ve listened to a lot of modern classical experimental records, and the sides are just one song long.

Care to name a few of these influences?

Gabriel: Midori Takada, a beautiful musician. Most of her stuff consists of reissues from the 80s. Suzanne Ciani. John Gibson also.

Vito: Laurie Spiegel’s huge on us too.

Gabriel: Laurie Spiegel, yeah, she’s been in our back pocket for a long time. I also listened to this record by Somei Satoh recently, called Emerald Tablet . There’s also Eleh, who as been making really interesting music since the 90s. Eliane Radigue, the French composer. Those are my go-tos, but they’re mostly old.

Despite Mother of Mars being branded a ‘kosmische’ project, you’ve said you find the term troublesome. How so?

Gabriel: Because it’s a genre name, as any kind of genre name is problematic. ‘Krautrock’ was applied by the English press to German music. It just sort of generalises and objectifies a community of musicians, or a style – or even people that aren’t connected – into one block. It’s an easy thing for writers. It’s easy to look at it and go “that’s the sort of thing that’s associated with this kind of expansive, synthy, experimental, let rhythmically oriented kind of music, which also encompasses ideas of ambient and rock.” So it’s cool in that way, but confining.

It reminds me of how problematic the term ‘world music’ is.

How did you link up with Jaiko Suzuki?

Vito: We’ve both known Jaiko for a long time. She’s been a drummer for years, but unusually I saw her sing at a party once. I was like, ‘wow, I really love Jaiko’s voice, I didn’t know she sang’. Then, when we were working on the music, we thought we could ask her to sing on some of the tracks.

Gabriel: I remember you just recording her one day without warning. It was like, “oh, we’ve got a singer now”. I was kind of taken aback. But then, as we started working with Jaiko more, it was more like, “she’s in the band”. I like to think of it as a flexible project. There’s a certain collective energy.

There’s also Ewan Pearson, who mixed the album. What was his part in it like?

Vito: He’s someone we’ve known for years, he was really important. Gabe was going to mix it originally but it’s hard especially with a project like this.

Vito: His sense of space and depth is unprecedented. You might fall in love with a rough mix too early because the vibe’s great, but he can take that demo or rough mix and maintain that demo-ish vibe or ‘innocence’, while still giving it extra depth.

Gabriel: And he’s a lovely human being.

You guys have described your relationship as characterised by “dangerous levels of severe antagonism moderated by angelic patience.” Did these sorts of frustrations play out on the recording?

Gabriel: That’s probably something I wrote in a bio. Honestly Vito and I generally get on pretty well. I can be a bit bluntly critical sometimes, but Vito deals with it very well. He’s a very patient and supportive person. I give him shit sometimes, even though i’m named after an angel.

Vito: I know I can get under Gabe’s skin too, but I trust that it’s genuine and that he’s not trying to hurt me or attack me.

So no explosive scenes in the studio…

Gabriel: Well, outside of the studio we have gotten frustrated with each other. But that’s more during touring. Little things, like we haven’t eaten or we’re tired. But we’re also pretty good at smoothing things over quickly.

As for your live show, you’ve said reconciling electronic and live aspects can end up sounding cheesy sometimes. What do you consider to be cheesy and how are you fusing the two?

Vito: I think you can combine electronic and ‘live’, but it is a huge undertaking getting those things together. For our live drums we’re using both acoustic drums and SPD samplers, and playing tracks to a click. One of the hardest things to pull off live is having the drums fit in with the electronics. It has to be really tight, but you still need the ‘live feel’. When I see people attempt it, I see it work – and not work – at about a 50/50 ratio. When it doesn’t work, it’s just a DJ set with a live drummer over the top, which is just the opposite of a band or a performance. It’s disconnected.

Gabriel: Ableton’s basically our source clock. Some people are completely Ableton-free, though. Perhaps that’s just a backlash against computers? I get that. When interacting with machines in general, you’re interacting in a different way. The speaker is what’s making the sound. But with a drum set, you hit the drum with a hand or stick, and a membrane is vibrating. When you blow a horn, a column of air is vibrating and making a note. I was always into synths, because I loved Depeche Mode and Duran Duran from when I was very small. But I also harbour an anti-synth ethos, as much as I love them. I think you should be able to go out into the woods and grab a blade of grass and blow on it and make music.