Addictive knobs. Radikal’s powerhouse synth modular is a semi-modular delight with a few unique tricks up its sleeve. Greg Scarth puts it to the test. 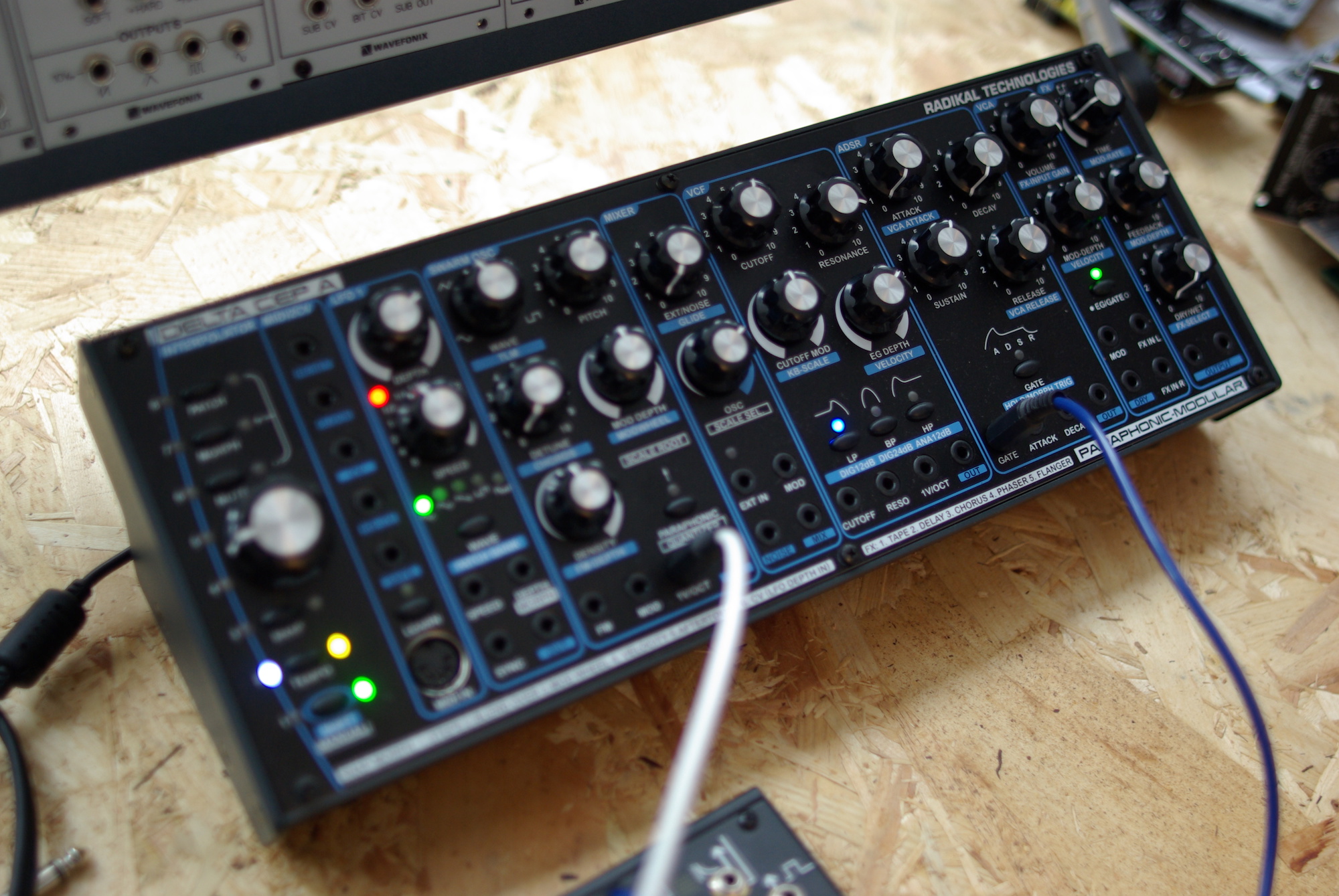 The box of the Delta CEP A bears a warning message: “Addictive knobs inside.” Available as a Eurorack module or the standalone desktop unit seen here, it’s a hybrid synth which takes a unique approach, built around a DSP-based oscillator section that can work in monophonic or paraphonic modes.

It’s an unusual way to judge a synth, but the weight of the Delta gives you a sense you’re dealing with something special as soon as you remove it from its box. This is clearly a solidly built, high quality unit, and, although that doesn’t necessarily translate into sound quality, it’s obvious that this is a step up from the budget synths which have flooded the market in recent years. Scanning across the front panel, the modular inspiration for the design is clear. Sections of the synth are clearly marked as distinct ‘modules’, from left to right: MIDI interface, LFO, Swarm Oscillator, mixer, multi-mode digital and analogue filters, envelope generator, VCA and digital effects section. To the left of all this is the unique Interpolator section, which is used for some of the basics like patch storage but also allows you to morph between snapshots of settings. 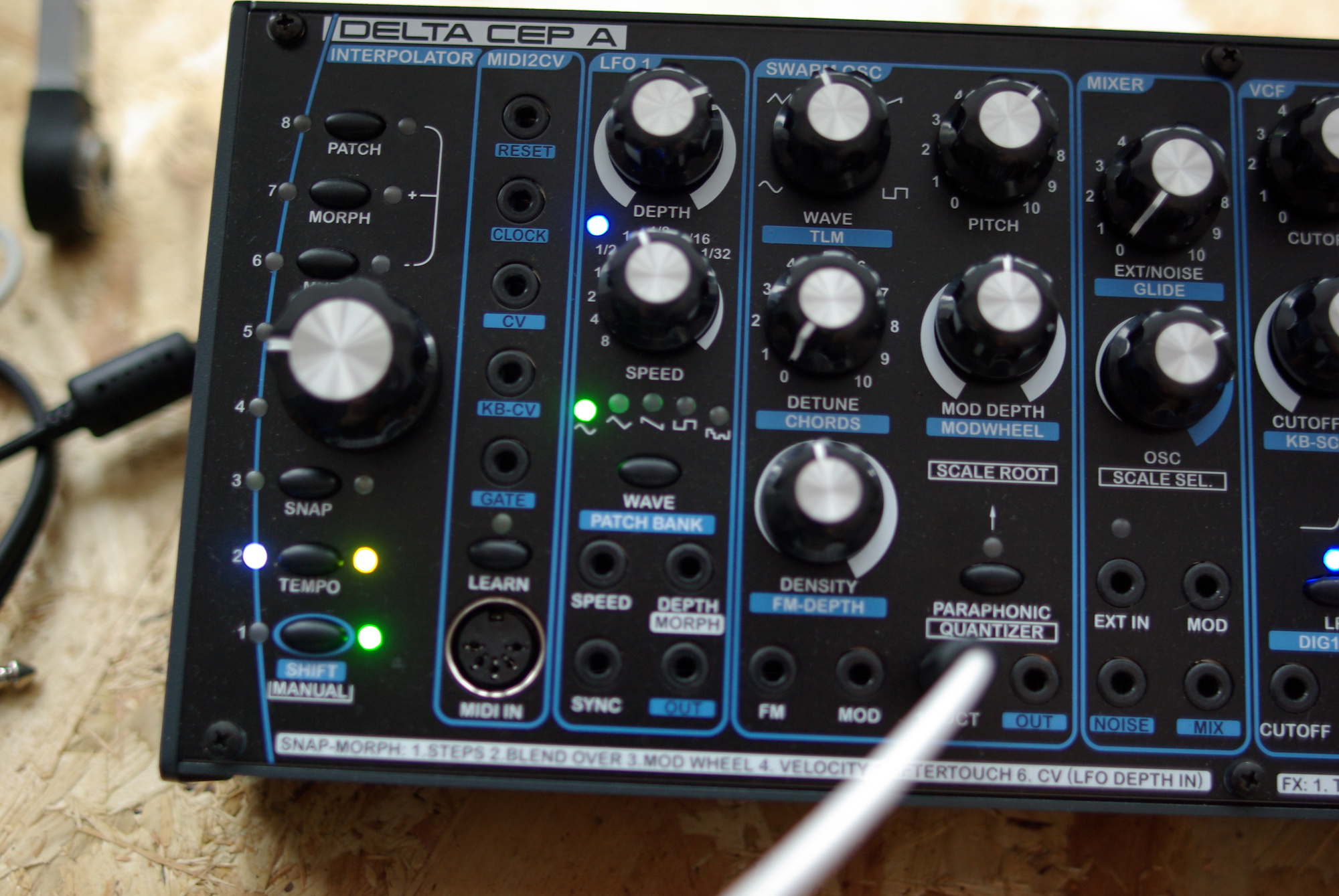 The Swarm Oscillator is the heart of the Delta’s sound, based on the brand’s RT-311 Swarm Oscillator module, a DSP-based oscillator which allows some clever harmonic effects using copies of the main waveform. I’ll concede that I initially jumped into using the Delta without fully studying the manual, so the subtleties of the Swarm Oscillator and its Time Linearity Modulation might have been slightly lost on me at first, but whether played in monophonic or four-voice paraphonic mode, it’s clear that you’ve got some real complexity and lush detail to the sound. It’s a synth that can do the fattest of monophonic bass sounds or delicate, Solina-esque string pads, or just about anything in between. 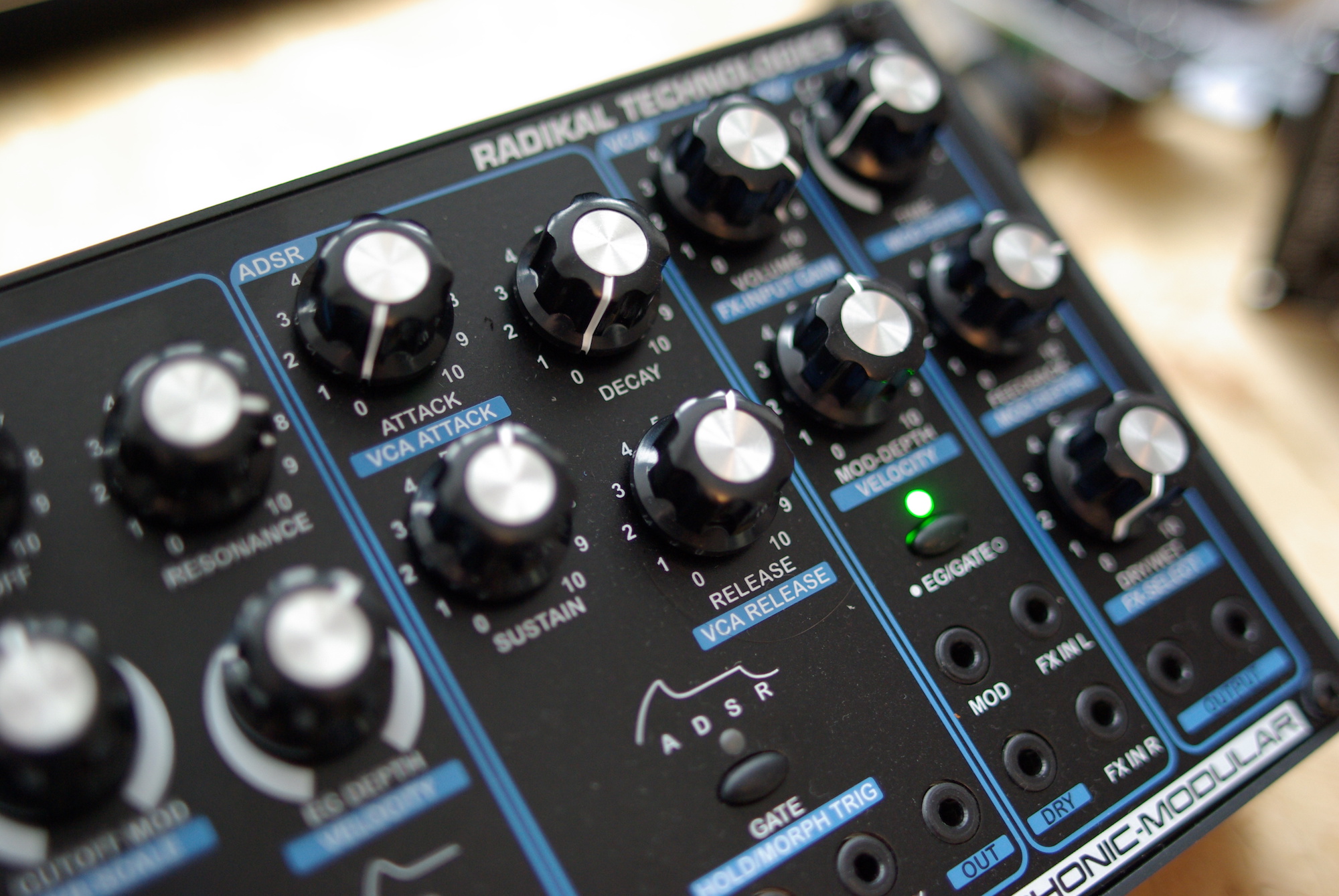 The Interpolator is probably the second most distinctive aspect of the Delta and one which again gives it some unique potential. The patch memory can store up to 40 presets, each including eight snapshots, which you can morph or step between using the large knob in the Interpolator section. Alternatively, you can sequence up to eight snapshots either using the internal clock or external triggers, morphing or jumping between snapshots in sequence. This can be used in subtle ways, like a clever way of automating modulation parameters to add movement to sounds, or in completely in-your-face style by having wildly contrasting snapshots in each slot. It’s very nicely executed and adds significant appeal to the synth. 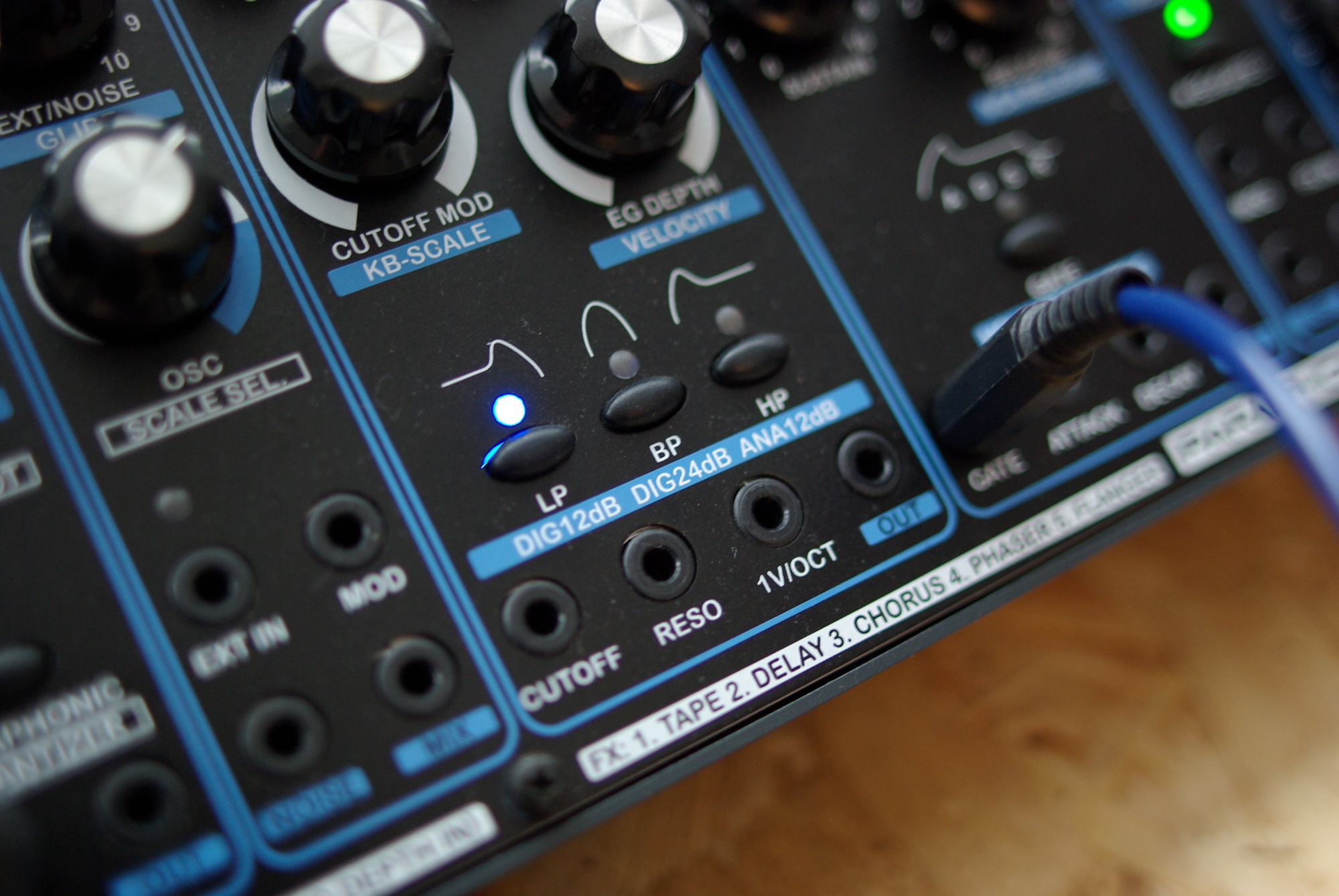 What’s interesting about the design of the Delta is the way it combines analogue and digital elements but still feels somewhat old-school. The way the building blocks of the synth architecture are clearly defined gives it a clear, user-friendly workflow when it comes to designing sounds. The majority of the synth is digital and also undeniably complex (not necessarily in a bad way), but it doesn’t have that finicky, menu-driven user interface that plagues so many complex digital synths. Instead, for the most part it feels like using an old-school analogue synth that just happens to do a lot of distinctly un-analogue things: very hands-on, surprisingly intuitive and with sweet spots to be found through considered sound design or good, old-fashioned tweaking. 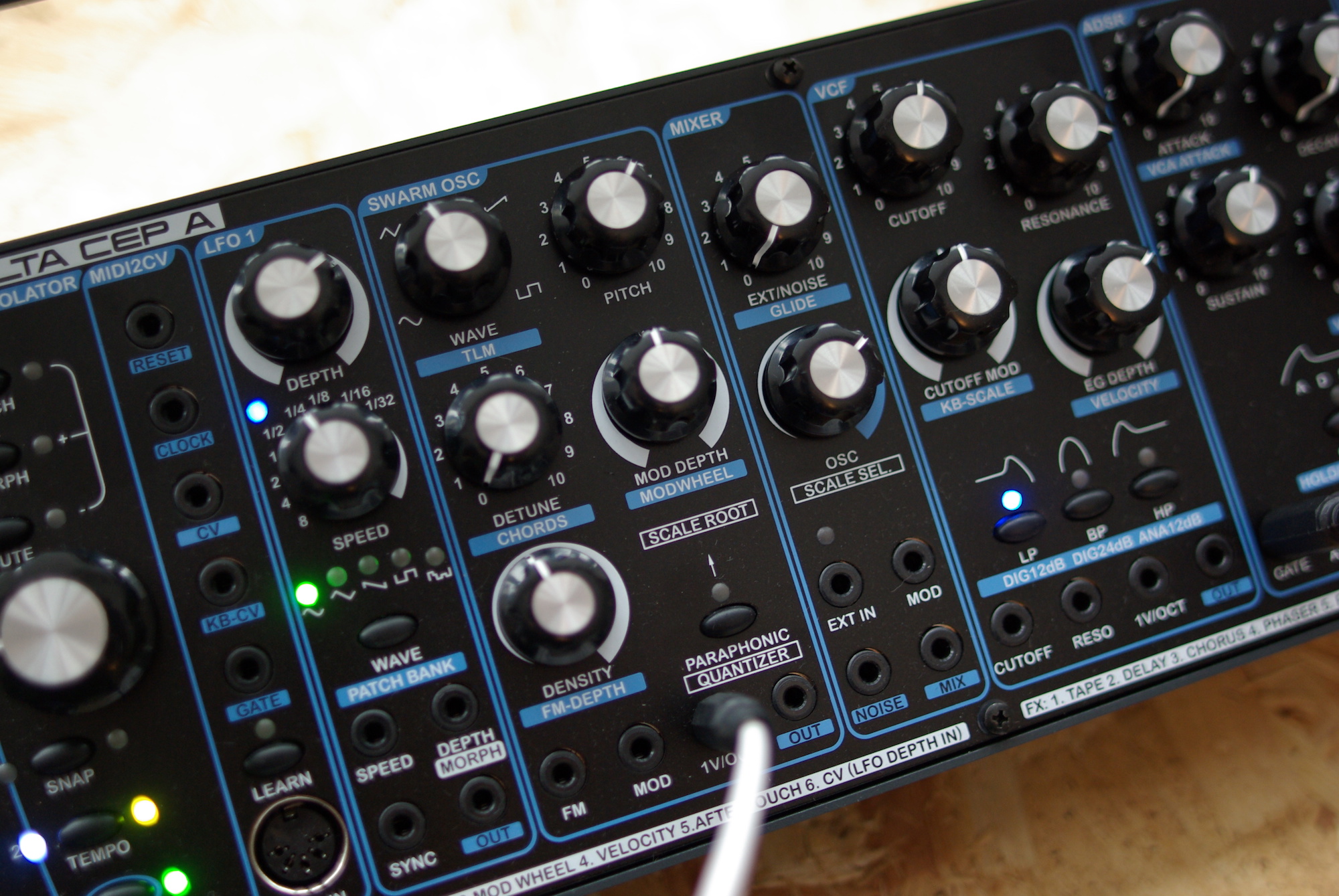 Patchability feels like the icing on the cake rather than the core functionality of the Delta. You don’t need to patch anything at all to get impressive results, but once you do start to explore the patch points the possibilities are endless, with plenty of audio and CV in and out options spread across every ‘module’ of the synth. We’ve seen plenty of similar semi-modular synths in recent years, but the Delta has a few unique features that set it apart, making it an interesting option to hook up to other gear. It’s a powerhouse of a synth when judged on its own, but it’s also clearly been designed to integrate smartly with other semi-modular synths and Eurorack modules. There are quirks to its design that break away from some of the conventions of synth design, not just in obvious ways like the Swarm Oscillator, but in small details like the way the filter section offers analogue and digital settings alongside each other.

The Delta certainly isn’t cheap, but it sounds expensive enough to justify the price tag. This is a proper powerhouse of a synth, with some unique features that make it stand out from the crowd.