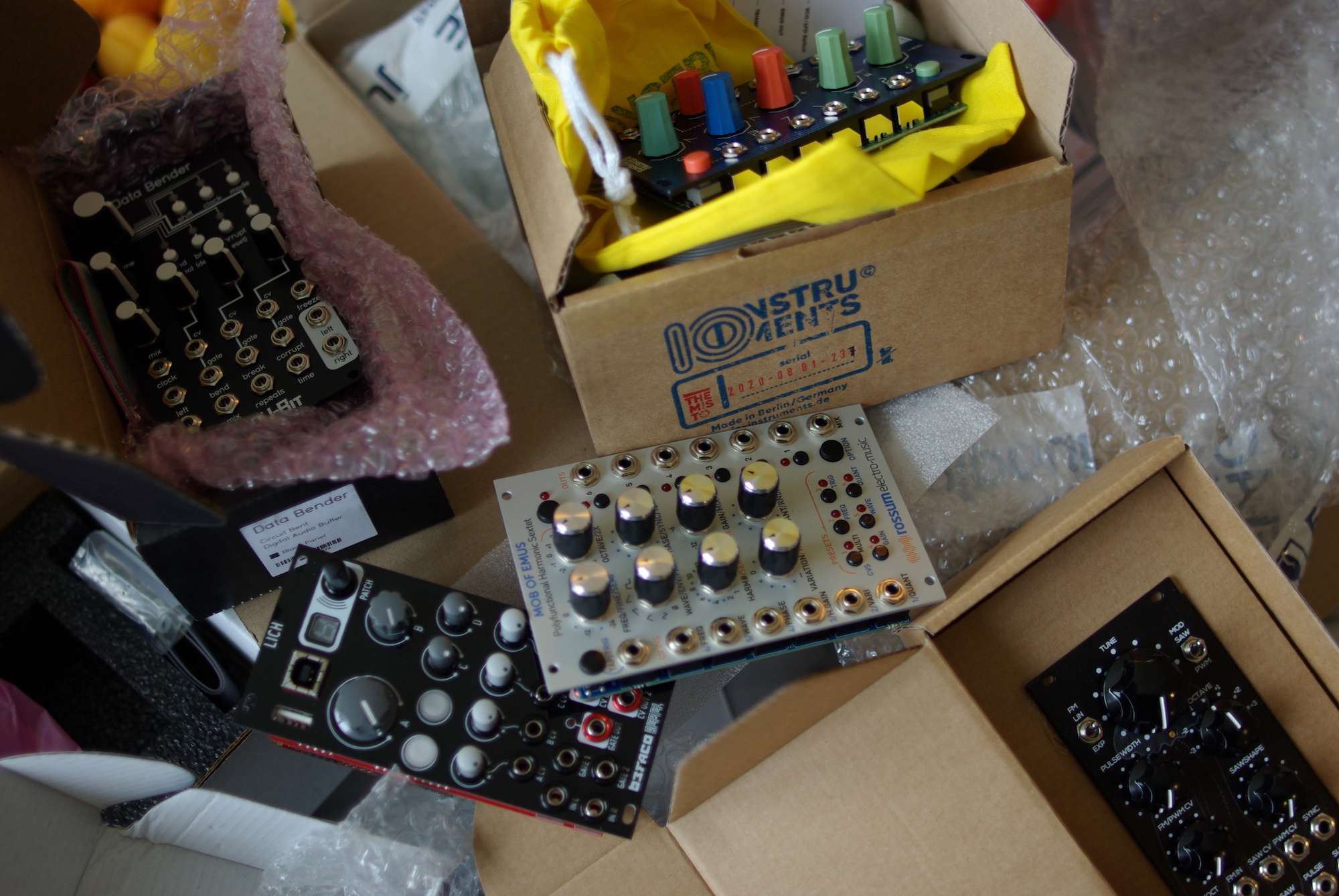 December is one of those pleasing months where a bunch of vaguely similar modules arrive which all fit into the same category but do things very differently. This month, we’ve got three contrasting takes on oscillators from Erica Synths, Rossum Electro Music and IO Instruments. It’s a nice opportunity to put them side by side and compare them, not in an effort to find the ‘best’, but to see how their approaches differ.

The IO Instruments Themisto is the most straightforward of the bunch, an old-school pure analogue VCO which delivers plenty of options at a very good price. It covers all the basics nicely, switchable between LFO and audio rate modes, with six individual waveform outputs (one of them a sub-oscillator signal) and plenty of CV control for pulse width modulation and linear or exponential FM. It’s a classic-sounding VCO that does all the standard stuff very well. Given the low price, there are also some surprisingly nice little touches, such as the inclusion of buffered CV and gate through sockets, allowing you to chain multiple VCOs and have them track pitch precisely without the need for a separate buffered mult. For the money, it’s hard to beat.

Moving up a level in terms of complexity, the second generation version of the Erica Synths Black Series VCO is another pure analogue VCO which actually proves quite similar to the Themisto, with the main difference being the inclusion of built-in modulation LFOs and a waveshaper for the sawtooth output. The latter is particularly good, with the option to control the sawtooth shape via CV input, allowing for some rich and complex tones that move and evolve. Whether it’s worth the price premium over the Themisto depends how much use you’ll get out of those slightly more advanced features, but there’s no doubt it’s a very nice VCO with plenty of control.

To describe the Rossum Electro Music Mob of Emus as an oscillator is a gross oversimplification, but that’s precisely what makes it interesting to compare it to the old-school approach of the two VCOs. In Rossum’s words, the Mob is a polyfunctional harmonic sextet: “six channels of oscillators, noise sources, cyclical and 1-shot modulators (including LFOs, envelopes, and various other shapes), sample and hold waveshapes, slow random modulators, triggers, rhythm patterns, and quantization (of both internal and external signals) in pretty much any combination.” It’s a hugely powerful module from the E-mu Systems co-founder, who continues to produce some of the most innovative musical tools around. There’s so much depth here that you could spend days if not weeks exploring all the ways to use the Mob, from polyphonic digital oscillators to modulation sources, trigger generation and sequencing. The £364 price tag isn’t necessarily ‘cheap’, but it’s very good value for the amount of functionality you get here.

In terms of complexity, the Befaco Lich just about has the Mob of Emus matched, with a pleasing bird link between the two modules for good measure. A collab between Befaco and Rebel Technology, the Lich is based on the latter’s OWL platform, allowing you to load Pure Data, Max Gen or Faust code into the module. It’s probably one for the fairly hardcore programmers in practice, but

Those with a taste for the more old-school end of things will prefer the simplicity of the Happy Nerding FM Aid, a clever little module that facilitates digital-style through-zero frequency modulation using analogue signals. It’s not an oscillator in itself, but takes two oscillator signals (or anything else) and uses one as a carrier with the other as a modulator. Strictly speaking it’s phase modulation, more or less in the same way you’d find in a Yamaha DX synth, and that gives you a good hint at the kind of tones you can expect: clangy metallic sounds and bell-like resonance. Very good stuff.

Finally this month, the Qu Bit Data Bender is a lovely little effect module, based around the concept of a circuit-bent digital audio buffer, “inspired by the ways in which audio equipment can fail”. That means we’re in the territory of skipping CD players, buggy software or on a more analogue note, a broken tape player or a scratched record. It’s a stereo module with a maximum sampling time of five minutes, giving you plenty of control over lots of aspects of its glitchy sound via an array of CV inputs for parameters like ‘bend’, ‘break’ and ‘corrupt’. It’s not cheap, but it sounds endearingly chaotic and full of character.