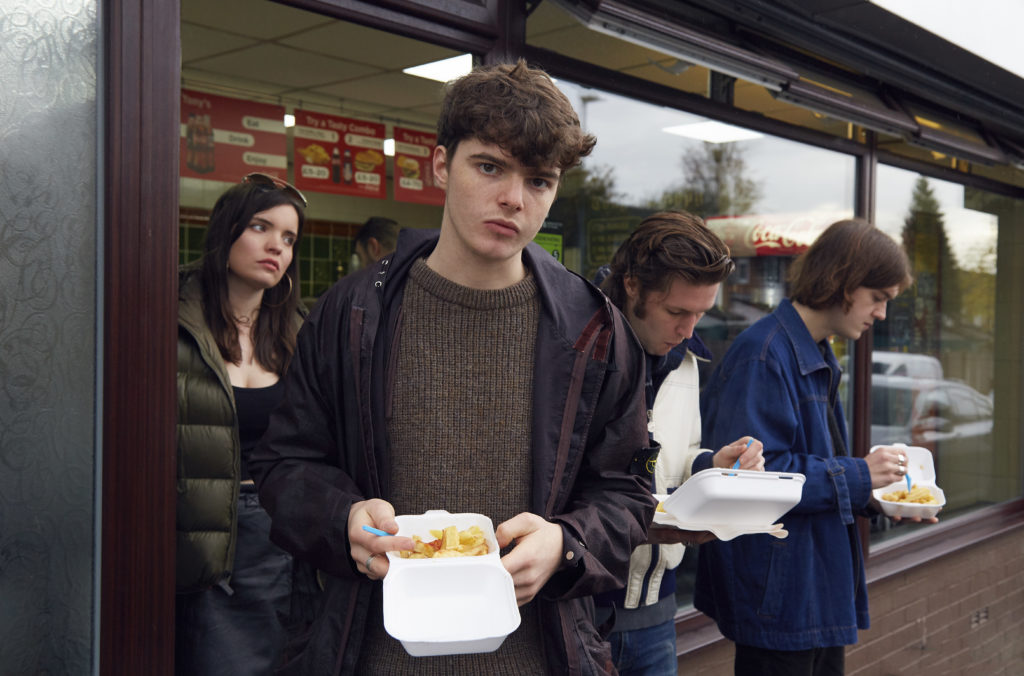 As a band with affiliations on both sides of the Pennies, hopefully Working Men’s Club won’t mind us borrowing that favourite chant of nearby Leeds FC to help sum up their attitude. “No one likes us, we don’t care.”


Meeting up with WMC’s frontman and indeed creative mainman Sydney Minsky-Sargeant, along with bass player Liam Ogburn, in the Soho offices of their label Heavenly Records, this certainly seems to be their default position. At the beginning of our interview, Syd describes starting life on the Manchester indie circuit by saying: “well, we were a nothing band.” At its close, when we discuss the possibilities for socially distanced shows, he quips: “We’re used to it anyway, there’s no-one our gigs anyway, because no-one really likes us.”

All this may have been true at the start of 2019, before the band – founded in Manchester, where Syd and now former members Giulia Bonometti (guitar) and drummer Jake Bogacki were at music college together – had released their debut single. When ‘Bad Blood’ arrived in February of that year, everything began to change.

Its scratchy indie funk strains, reminiscent of A Certain Ratio or even the early Happy Mondays singles, immediately found themselves elevated to the 6Music playlist. That, in turn, brought the band to the attention of one Jeff Barratt, the man who via his Heavenly Recordings label has given us everything from the first Manic Street Preachers single to the latest, masterful works by Baxter Dury.

It was Barratt’s idea to get Syd to turn a demo he’d given him, a sketch of a song called ‘Teeth’, driven by a heavy synth bassline, into a proper track. “When Jeff heard it he was like ‘oh yeah, you’ve got to play that live’.”

Fast forward to the fag end of 2020 and it would most certainly not be fair to say that no-one likes Working Men’s Club. Their eponymous debut album, a heady mixture of acid house machinations and spunky indie attitude, having finally made it to the shops and playlists of this world after being held up by – yes, you guessed it, the Covid pandemic – has gained almost universal praise and toped several end of year charts. To all extents and purposes, WMC are currently the hottest young band in Britain.

For the band, the delay to the album has been unbearable. The pandemic took them – like most of us – by surprise. The first sign they had was not in the UK, but rather at their last pre-lockdown gig in France.

“I think we played one of the last gigs that happened in France before the shutdown,” remembers Liam, “They were definitely two weeks ahead over there, there were signs everywhere, whereas in the UK there wasn’t anything. That’s when I first realised it might actually be coming over here. I remember how scared we were.” “I was trying to shake people’s hands and they were like ‘nah, none of that’,” adds Syd.

Liam, Syd and the rest of the band’s parted company with plans to meet up the following Monday, but in fact it was over three months before they would meet again. Two gigs supporting Noel Gallagher’s High Flying Birds were on cards the when they came back. “They didn’t get cancelled until the day before,” says Syd, ” I was hoping they’d go ahead, I was like ‘can we just do one more?!’

Liam, a “brave boy” according to Syd, has remained working in his retail job throughout the pandemic. He describes the first day of lockdown as the strangest of his life. “Getting on the train with no single person on it…” he says, “not even seeing a single person while I was cycling to the train station.”

Syd, on the other hand, was initially pretty immune to the chaos unfolding outside. “I quite enjoyed the first few weeks because we’d just been on tour for about a year so I was just drained, man, I was just sleeping loads. Then I came out of hibernation after a week or two and I realised that everything was going to shit. I think you’ve got to get over that really quickly, it affected everyone. I felt very fortunate to be in the position I was in. With my mum. I got to spend a lot of time with her and go on a lot of walks. I felt privileged to not be living in a city. I think I could have been in a far worse situation.”

No-one could begrudge Syd a bit of a rest after the rollercoaster ride he’s had at the helm of WMC. Having signed to Heavenly and started work on their debut album, the band’s move to combine their post-punk guitars with electronic elements caused drummer Jake to leave the band, while Giulia decided to focus on her solo career, leaving Syd to write the final tracks of the LP alone. Syd and Liam finally decamped to Sheffield and the studio of MIA/Arctic Monkeys producer Ross Orton’s studio for a second session, capturing the album’s final eight tracks in a satisfyingly full on just before Christmas 2019. “We didn’t take any drugs, we hardly drank at all either, we just got on with it,” recalls Syd.

It was through Orton’s contacts that the current line-up was completed, with Mairead O’Connor (The Moonlandingz) and Rob Graham (Drenge, Baba Naga) joining the line up, but by Syd’s reckoning, even the former members played their part in what is ultimately a testament to and snapshot of the band’s first two years. “I can’t deny anyone’s contribution to the creative process, The evolution of what this band was and has become, do you know what I mean? Credit to everyone that’s been involved “

He blames the sudden and rather unexpected surge of interest in the band for piling the pressure on causing the original split. “We didn’t expect anything really. There was no expectation of an sort of attention, really, out of the generally public or anyone really, we just wanted to play and make music and enjoy it really, and not have to go to college. Suddenly there was a load of interest out of nowhere and that in itself was a lot for certain people to deal with. That was maybe what stifled everything. There were ongoing issues anyway and that was just the icing on the cake.
“At that point, because it was so sudden and such a big change, I just made a vow to myself to finish and make a record to have something to show for that period in time I had to put that period of time into music, you know, and a lot of people had proved their loyalty to me – Liam stuck by me through all that.”

Anyone who has heard Working Men’s Club will be glad that he didn’t choose to lose heart at that critical time. It’s a natural blend of electronic power and cool post-punk attitude, a place where shuddering electro basslines and soaring synths meet hazy guitars, all topped off with the sneering sassiness of Syd’s unique vocals proving the cherry on top. It’s not so much as a case of something for everyone – there’s a confrontational feel to it that definitely says ‘take it or leave it’ rather thsan ‘please like me’. But tracks like ‘Valleys’ or ‘John Cooper Clarke’ sound like the summation of more than half a decade of brilliant music, and especially (though not exclusively) music from the north of England, made by those who’ve absorbed it their musical DNA rather than consciously co-opting it for the sake of hipster eclecticism.

And now, with the benefit of hindsight, it feels like maybe fate has played its part and the stars have aligned to bring Working Men’s Club the album to the nation’s attention at precisely the right time to be appreciated. Its lyrical content, the internal monologues of smallltown Britain, giving voice to the concerns of the country’s left behinds and voiceless living away from the big lights of the city, never seemed more relevant after the divisive splits of both geographic and societal types, caused by the fallout of Covid 19. Having been stuck in limbo for much of 2020, too, it feels like a band and a singer agitating for change is just what we need right now.

“That’s it. To be honest with you it’s probably far better to be putting the album out now, because we’ve got a far better team around us,” concedes Syd, “They’ve worked really fucking hard and we’re grateful to them and to Jeff for what he’s done. We feel very fortunate for that.”

Plus, the relative calm of the lockdown period has given Syd plenty of time and space to get on with album number two.
“I wrote most of a new record during lockdown,” he tells us as our interview begins to wind up to a close, “but I don’t think it’s finished, really. It’s not a full body of work yet, I don’t think anyway, but there are kind of two different sections to it anyway. We’ll just have to see. I’d like to put music out as quickly as possible after this record. I think it’s important. I think people need music at the minute.”

Well, music like this we can definitely do with, and the more the merrier.