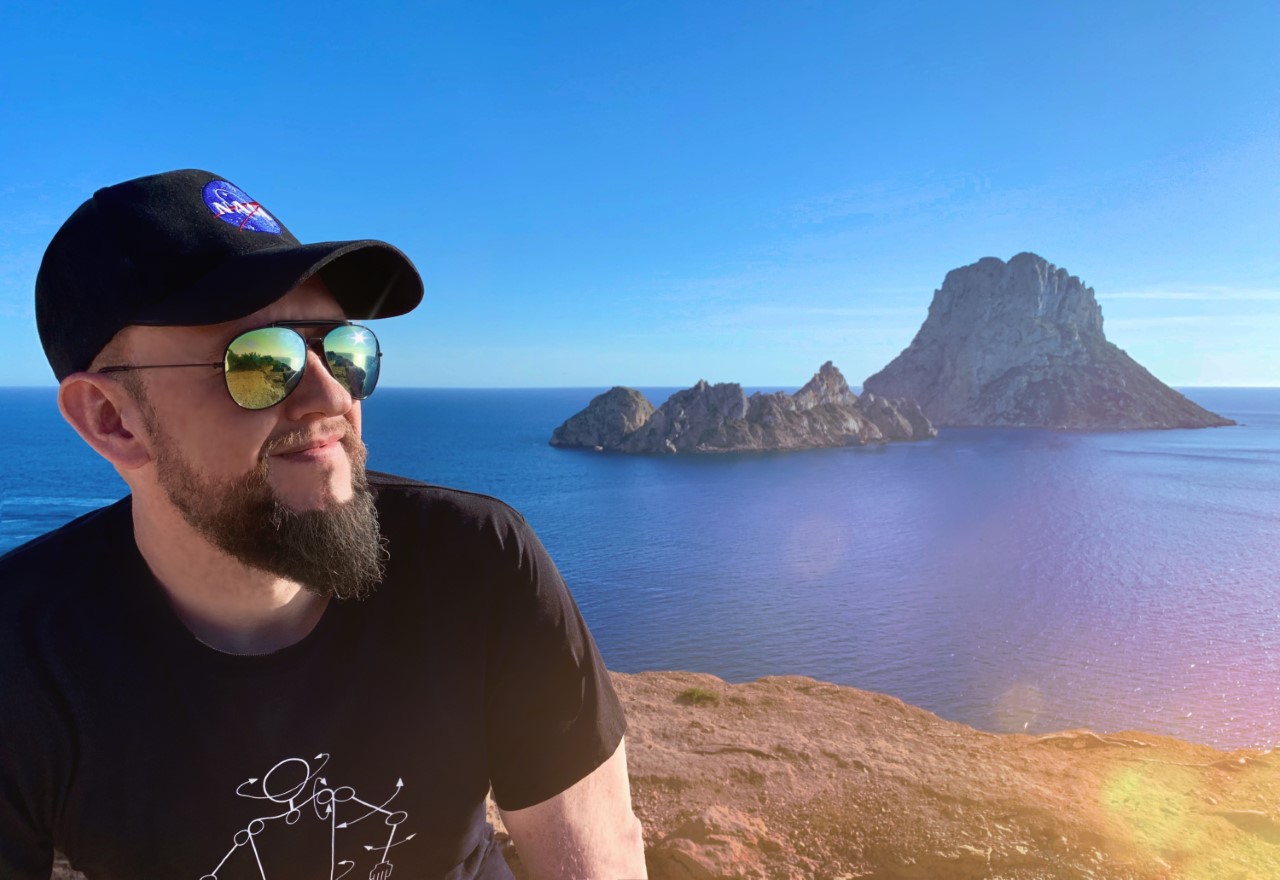 Tom Middleton is, in short, one of the best known faces in the UK house scene. From his early days, collaborating with Aphex Twin and becoming one half of Global Communication with Mark Pritchard, to making feelgood dancefloor anthems and darker, progressive house vibes as Cosmos and The Modwheel respectively, he’s been a constant presence.

As a DJ and remixer, he’s been arguably even higher profile, headlining superclubs and festivals worldwide, capable of projecting his naturally ebullient and gregarious personality onto the biggest spaces and bringing them to life.

But there’s another, lesser known side to what Middleton does, one that’s directly connected to his musical roots while stretching his talents into fresh new territory. Visit his website and you’ll see that these days he refers to himself not only as a sound architect and designer, but a creator of “science-based audio content for wellbeing, anxiety, sleep, productivity and performance”.

Middleton, originally from the West Country but now splitting his time between London’s Docklands and the southern heel of Italy, has taken his wide experience both making and sharing sound and elevated it to the next level. A properly scientific level, in fact, as he says “integrating biophilic design, neuroscience, psychology, autonomic nervous system, respiratory and endocrine sciences.”

In recent years, he’s immersed himself in the true science of sound, looking at music in new ways and harnessing its power beyond its role as mere entertainment. It’s not a departure – Middleton is convinced, in fact, that his early ambient work with Global Communication, very recently collected into the impressively lavish Transmissions boxset by Warp and re-mastered from the original DAT tapes, was the starting point of a life spent making lives better through music. If anything, he tells us when we catch up with him at his London home, his latest work is a continuation, a distillation and refinement of everything that has preceded it.

“Everything that Mark and I explored, intuitively, in the early 90s with Global Communication I utilise now,” he tells us, referring to the meditative, superchilled music they made at the time, culminating in their first album proper, the ambient classic 76:14.

Much was made at the time of the band’s rural surroundings. Their studio in Crewkerne, Devon, looked out onto a field of gently grazing sheep, and both the immediate and general geographic locations fed into a sound they declared back then was designed to help people slow down, relax and escape from the pressures of modern living.

“But now I know that most of those techniques that were intuitive at the time,” he continues, “there is now science to support that, which is extraordinary. And nature is a backbone to this.”

So a form of music invented almost as an academic experiment by Brian Eno – his Music For Airports album is generally accepted to be the first ambient LP – and then grew in popularity as an antidote to the increasing ferocity of rave and techno, is now entering a new phase in its lifespan.

“This underground form of expression has turned into a whole new genre,” says Middleton, “and people are utilising ambient, electronic expressive music, to help themselves, to feel better from a mental, emotional, functional point of view. What I do now is functional music, music specifically designed using science and elements of research. I work with university labs and academics to help support the research I’m doing and help create content that literally can be measured in reducing your resting heart rate, reducing your blood pressure and cortisol levels, in your system.”

The strain of life in a hectic, post-industrial world, as ever, remains the enemy that needs to be quashed. Middleton points to the work of Bernie Krause, a Californian musician and early adopter of Moog’s synth technology in the 60s who eventually turned his back on the music industry to become a self-styled ‘soundscape ecologist’.

Krause began recording nature and turning those recordings into computer visualisations, or showing the different layers of sound going on in the atmosphere in visual form. “He defined these different types of sound as geophany – the elemental sound of nature, this background sound that’s actually quite subtle up to about 20-30 decibels. (the sound of the wind blowing through the trees). The layer above that is called biophany – this lovely layer of birds and insects that blends in perfectly with the geophany. Then you’ve got these other two layers that fascinate me. You’ve got intentional and unintentional anthropophony, the human addition of noise to the soundscape. If it’s unintentional anthropophony, that is basically noise pollution, primarily from industry, and as a species living in a post-industrial age, we’re getting louder and louder. That is, let’s face it, a pretty unhealthy sound to be exposed to.

“So basically when you’re hearing these you are keeping your cortisol levels high and remaining in a state of fight or flight. If you’re exposed to more than 80,85 decibels for an hour you’re immediately in a stressed out state. Then the final layer is intentional anthropophony – deliberate sounds made by humans, such as music.”

Tom’s endeavours now encompass a number of different roles beyond merely making music. He has, for instance, used his curatorial skills as a DJ to create playlists for micro hotel chain Yotel and now works as a sleep science coach, with finding ways to use music to aid sleep being one of his fascinations, even releasing an album for Universal Music in 2018 containing soundscapes designed to be played for the hour before bed, called Sleep Better. He’ll also soon be working on research with Goldsmiths University in South London on the psychology surrounding music. “I’m sure that fact that I’ve been and played music to thousands of people in different places all over the world and watched them reacting to it is why the professors there are interested in me,” he insists.

As well as keeping one foot in the more traditional music camp, working alongside his former partner Mark Pritchard on the project, collecting early archive material and remastering the early material from the original DATs, Tom is convinced that the way music is being used is changing. Millennials, especially, look at it as something much more functional than mere entertainment.

He points to the success of Calm, the first ‘unicorn’ (raising one billion dollars with its initial public stockmarket offering) wellness app, which now features leading and underground artists creating music to aid sleep and indeed commissioned two pieces from him.

“Beyond record labels, you have this extraordinary outlet,” he enthuses, “Moby released his Long Ambient albums through Calm. It has something like four million subscribers and 70 million downloads, so even more than Spotify or Apple Music or a record label, I have this extraordinary outreach, to create meaningful music with purpose and a function, which in this case if to help you sleep.

“If you look at who is releasing stuff on there, it’s quite interesting – Ellie Goulding is on there for instance. Calm is looking at some pretty high profile artists and creating these ambient treatments Calm is now a record label –an ambient record label. End of story. You’ve got people like Ellie Goulding, Sam Smith and Moby on one hand – on the other, there are underground artists who’ve been making ambient music for a couple of decades now putting their stuff on there too.”

That said, the good old fashioned way of delivering music – in front of an audience, if anyone remembers that – is something that Tom is not likely to go off anytime soon. He was due to play London’s Jazz Café in late February just before Covid restrictions were imposed, with a new show re-presenting the music of Global Communication in live, electro acoustic form, alongside multi-instrumentalist composer/arranger Ross Sampson (Pisces Rising) and a string ensemble. Perhaps just as well, given that Middleton – despite a subsequent negative test – is convinced he was afflicted by a rather nasty case of the virus he picked up in Madrid while travelling back to the UK from visiting his family in Italy. It’s been rescheduled for April 2, 2021 – and Middleton says he (along with most of the rest of the music industry) is busting to get back in front of an audience.

Whether it’s playing live or the more free flowing, unrehearsed and unpredictable experience of DJing, Middleton’s love of performance is one thing that’s stayed constant throughout his career. His ‘ambassadorial’ role was a matter of need at first, when his GC partner Pritchard was struck down by food poisoning on a trip to play in Russia, a condition which took several years to shake off and at its worst sparked serious anxiety attacks.

“Mark was less interested in being out there and performing. even if there was a period when he really enjoyed it,” Middleton tells us, “At first it was just challenging for health reasons, he simply couldn’t go out and perform. But obviously, if your world is studio-based, that is Mark’s world, predominately. His forte is in that realm. Whereas I always really liked to connect with the audience, learn from the audience and share that experience. So I suppose my ambassadorial role, as the representative of what we’re doing in the studio, has always kind of continued.”

When we’ll actually get to see him in action, fulfilling that ambassadorial role, we can’t tell you of course. In the meantime, of course, there’s plenty to absorb ourselves in, what with those lush GC reissues. So go on, get stuck in and treat yourself – according to the latest evidence, at least, it’ll do you the power of good.