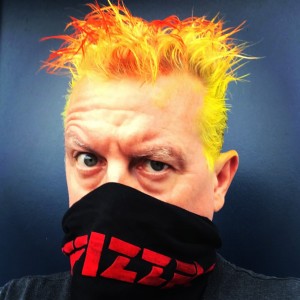 “This is an angry record” – punk legend Spizz’s elegy for a lost age of London venues….


Spizzenergi, the legendary punk outfit who were the first ever to top the indie charts, are releasing a typically angry seasonal single in collaboration with Bowie producer Tony Visconti.

The track was originally penned about the decline of Denmark Street in London during the last week of the 12 Bar Club, the tiny venue on the street that has played host to many famous acts over the years including Jeff Buckley, Adele and The Libertines. As well as being home to music shops and industry offices, the street played an important part in the careers of The Clash, Sex Pistols, Rolling Stones and Bowie, among many.

But with many venues facing ruin after the pandemic, it has taken on a new identity as a lament for an age of gig going and partying before Covid hit. “It’s not a Christmas single,” said the band’s eponymous frontman Spizz, “It’s not a protest song – it’s an angry song!”
Tony Visconti added his production skills to the record, out now on vinyl and released in full digital form on December 18, declaring himself both as a fan of the song and its sentiments. He told how he arrived in London from New York in April 1967 and immediately fell in love with the street.

“To this day I still have to stroll up and down Denmark Street, sometimes walking away with a new instrument. Each store has its specialties,” he says.

The single’s fortunes have been further boosted by punk online bible Louder Than War launching a ‘let’s get Spizz to no1’ campaign in recent days.