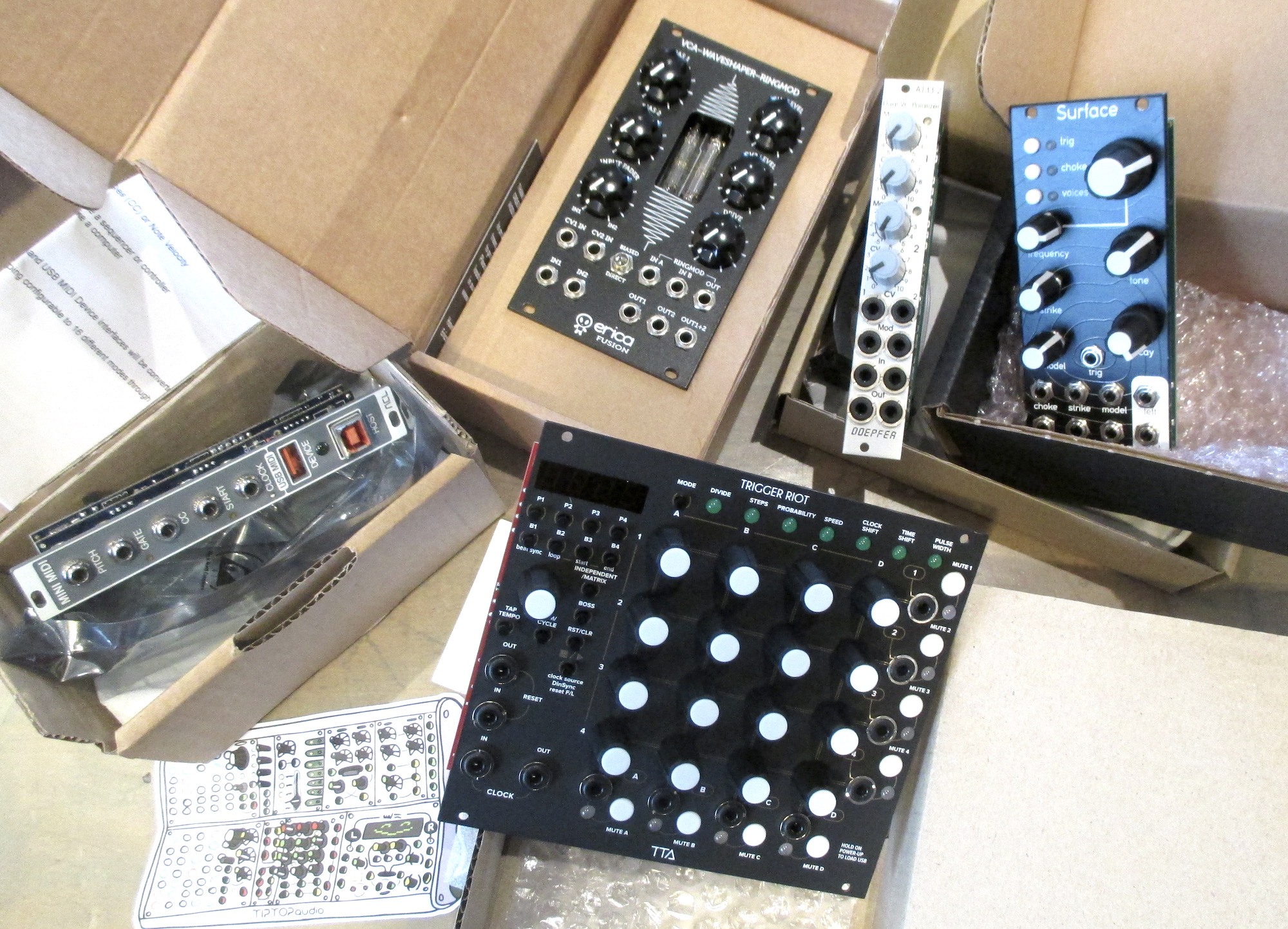 The star of the show this month is the Qu-Bit Electronics Surface multi-timbral physical modelling voice, a module which has blown us away with its beauty. Plucked strings, tuned percussion, abstract textures and twangy goodness are the order of the day here, and it’s all surprisingly lush and detailed.

It’s a really immediately gratifying module, producing interesting timbres as soon as you hook it up thanks to a choice of seven modes (Pluck, Bell, Electric Piano 1 and 2, Kick, Snare and Prepared Piano). Tone, Strike and Decay knobs (all of which can also be controlled via CV) allow you to adjust the timbre of each model, with the exact behaviour of the controls changing depending on the model you’ve chosen. You can also select models via CV, which allows for some clever sequencing options.

What’s particularly nice is the way Qu-Bit have implemented features like polyphony and stereo without any fuss. The module isn’t polyphonic in the sense that you can feed it multiple notes simultaneously, but play a series of notes in close succession and their decay tails will ring on, up to a maximum of eight simultaneous voices. That allows for complex strummed chords and arpeggio voicing. You can also cut off the decay tails manually using the Choke button or CV input, allowing you to mute the output for chord changes when using longer decay times.

There are already quite a few physical modelling voices in Eurorack, with the Mutable Instruments Rings probably being the closest alternative to the Surface. In practice they’re quite different things. The approach of Rings and its audio input gives it a little bit more range in terms of sound, but the Surface wins on polyphony. A brilliant module for ambient music, abstract electro atmospheres or subtler techno styles. Immediate and easy to use, but major depth hidden away inside.

Also landing this month, you can file the Doepfer A-133-2 and Erica Synths Fusion VCA-Waveshaper-Ringmod under the unorthodox category of “VCAs that aren’t really VCAs”. You can use them both as regular VCAs if you want, but they’re mainly intended to do other things.

The A-133-2 is a new version of Doepfer’s A-133 Dual Voltage Controlled Polarizer, originally released in 2013. Despite its smaller format, it manages to expand on the features of the original unit thanks to the addition of modulation inputs on the CV signals. Like the original, it’ll work as a dual voltage-controlled polariser/attenuverter, but the mod inputs mean it can now also work as a dual DC-coupled ringmod. A very handy and compact addition to any rack, and like most Doepfer modules it’s very attractively priced at £74.

Erica’s VCA-Waveshaper-Ringmod module is an even more extreme example of the not-really-a-VCA formula. Based around a pair of valves, feed it some audio and it works as a really nice waveshaper, adding harmonics and warping signals when you adjust the bias and drive settings. In practice it feels somewhere between a waveshaper and a filter, working brilliantly as a quirky, characterful alternative to a VCF when you modulate it via CV. Meanwhile, the ringmod side of things is aggressive and easily pushed into quite vicious territory, adding another string to its bow. I like the all-round flexibility of this module a lot. Like most of the Fusion modules, it’s not necessarily the most compact solution, but it does something quite distinctive and different. Swap it into a rack in place of a VCF, feed it an oscillator and you’ve immediately got yourself a nice little additive synthesis setup which will change the way you think about creating sounds.

Tiptop Audio’s Trigger Riot sequencer has been around a while now but gets a refresh for 2020 with a new black panel. We won’t go too deep into the features here because there’s not much left to say about a module that quickly established itself as one of the most powerful (and, indeed, popular) sequencers in Eurorack, but suffice to say it’s still a winner. The facelifted version looks different but works just the same, turning its hand to everything from drum sequencing to melodic pattern clocking, and working particularly well as a live performance tool. A modern classic with a slick new look.

A MIDI-to-CV module really isn’t the kind of thing where you want to see a brand reinvent the wheel, so it’s good to see that Audiophile Circuits League have focussed on nailing the basics with their Mini Midi. Designed as a compact solution for getting MIDI into your Eurorack setup, it’s an impressively thorough module, with USB in for hardware devices (sequencers and controllers) or a DAW, and five CV/gate outputs for pitch, gate, MIDI CC/velocity, start/stop and clock. Configure a mode for the CC/velocity output using the DIP switches around the back of the module and away you go. Simple, straightforward and effective.