This month’s new Eurorack module releases include a brilliant reverb from Earth Quaker, a killer envelope and filter pairing from WMD and a neat CV-to-MIDI solution from Befaco. 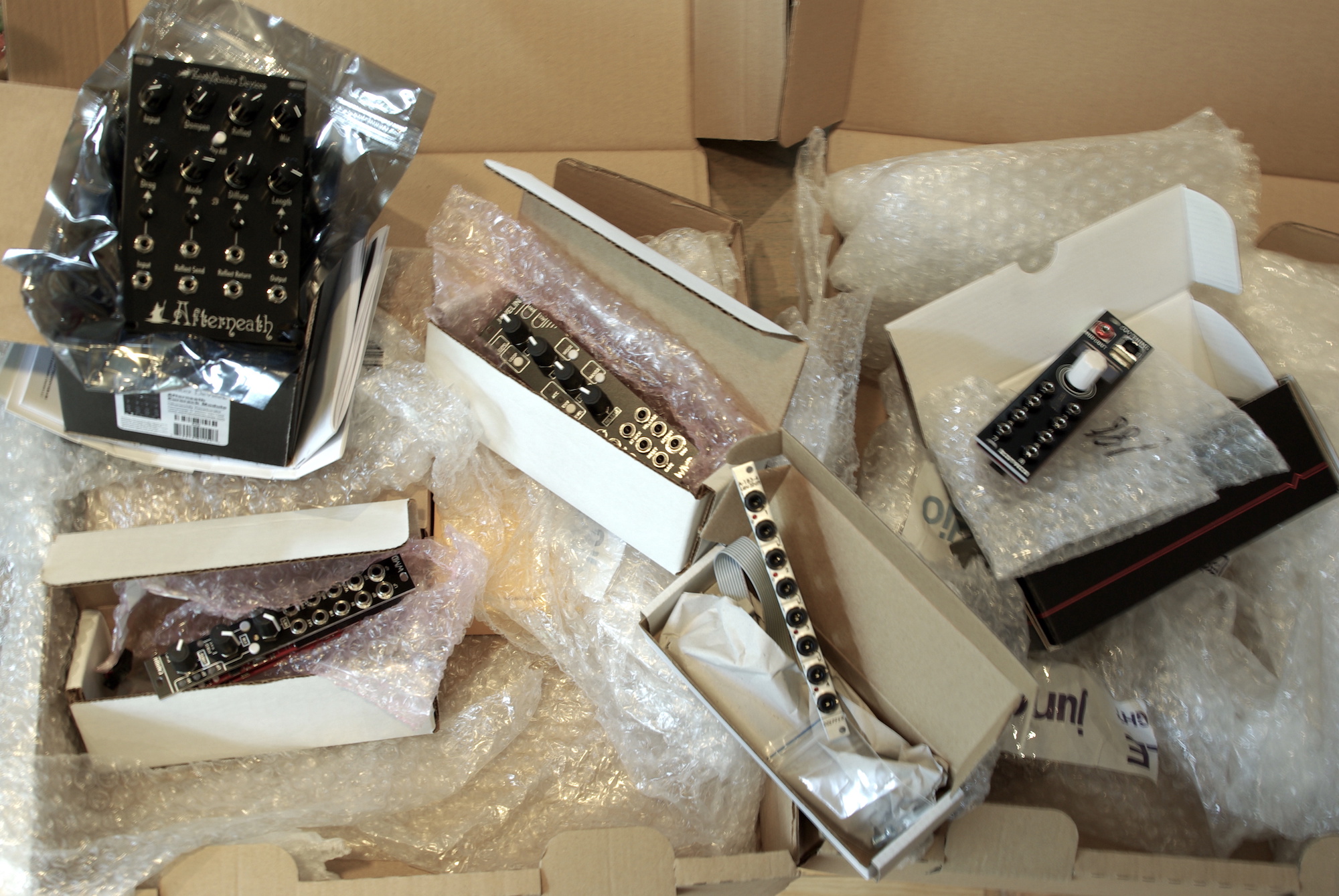 Billed as an ‘otherworldly’ reverb unit, the Earth Quaker Afterneath has already been a big hit as a guitar pedal, updated over the years to the current third-generation model, and now arrives in Eurorack form. Taking what initially feels like a straightforward approach to generating ambiences via a series of digital delay lines, the module turns out to pack some nice surprises beyond basic reverbs. It’s an intuitive process to dial in a sound using the Length, Diffuse, Reflect and Dampen (tone) controls, but things get really interesting when you adjust the Drag control, which spread and separate the delay lines in a uniquely creative way.

At higher Length and Reflect settings, the module will self-oscillate, allowing you to use it as an oscillator in combination with the nine modes of the Drag control. The module version is actually quite a bit more versatile than the pedal version thanks to CV control of the Drag, Mode, Diffuse and Length settings. It’s great as a standard mono reverb but even more interesting when you use it as a combination of processing device and sound source in its own right. I found that the sweet spot was to hover just on the verge of self-oscillation, modulating the Length setting and ‘playing’ the Drag control over CV to create drones and synth textures from the input signal. Brilliantly creative.

WMDevices have quickly become one of our favourite brands, living up to their straight-to-the-point mission statement “To Build Dope Shit”. This month sees the arrival of two modules that build on previous products and tread that fine line between user-friendly simplicity and hidden sonic depth. The WMD C4RBN (pronounced “Carbon”) is a multi-mode filter with input saturation and an output wavefolder derived from the brand’s Synchrodyne module, while the WMD Javelin is a combined envelope/VCA which the brand boldly proclaim to be the ultimate Eurorack envelope.

The arrival of the two modules at the same time proves fortuitous as they turn out to work really nicely together. The envelope generator in the Javelin can stretch up to a whopping 88 minutes per stage at extreme settings, but it does fast, snappy envelopes and a clever cumulative accent control just as well, teaming up with the C4RBN nicely and instantly lending itself to a particularly controllable take on acid bassline sequencing. The C4RBN plays nicely at mild settings, but things get really wild when you push and provoke it into squelchy resonance, driving the input and playing with the saturation via CV control. It’ll do a decent TB-303 impression, but you soon find there’s way more to it than that.

Both are excellent modules in their own right but even more impressive as a pair. Coming in at reasonable prices for such versatile modules, they’d both make great choices for anyone making a start in the world of Eurorack, offering a simple, straightforward approach with enough depth to keep things interesting as you progress and start to create more complex patches and sounds. 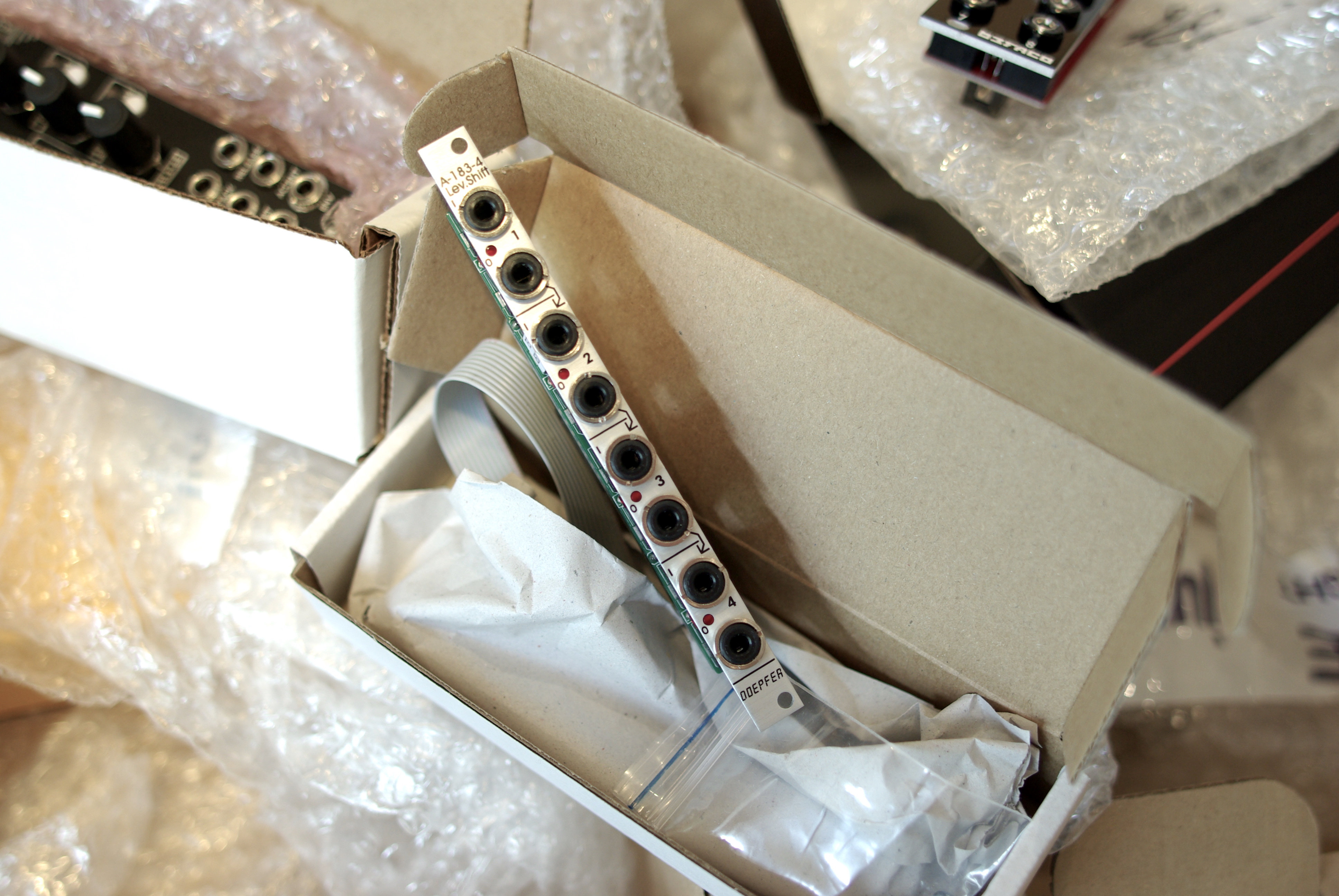 You can always rely on Doepfer for good quality basics at affordable prices, and that’s exactly what we have this month with the A-183-4 quad level shifter. You know it’s a compact module when the full name of the unit won’t fit on the front panel, but despite its tiny 4hp width, the ‘Lev.Shift’ packs in four channels of level shifting for digital control signals, such as converting a +5V clock or gate signal to +12V. It might just do one thing, but it does it perfectly without taking up any more space than it has to.

Finally this month, the Befaco CV Thing is essentially a compact version of the VCMC voltage-controlled MIDI controller, simplifying the concept to focus on CV control of MIDI gear. It’s fair to say that the vast majority of MIDI-CV interfaces in Eurorack focus on the exact opposite idea, converting MIDI signals from external hardware or DAWs into CV signals in order to control modules. Flipping the concept the other way around proves interesting in its own right. I found the most obvious starting point to be pairing the CV Thing with an ALM Pamela’s New Workout as a modulation source, spitting out CC signals to send to hardware synths. It’s a good way to open up the potential of using MIDI hardware with Eurorack as the control system, sending clock signals, program changes and note information out to synths and drum machines.