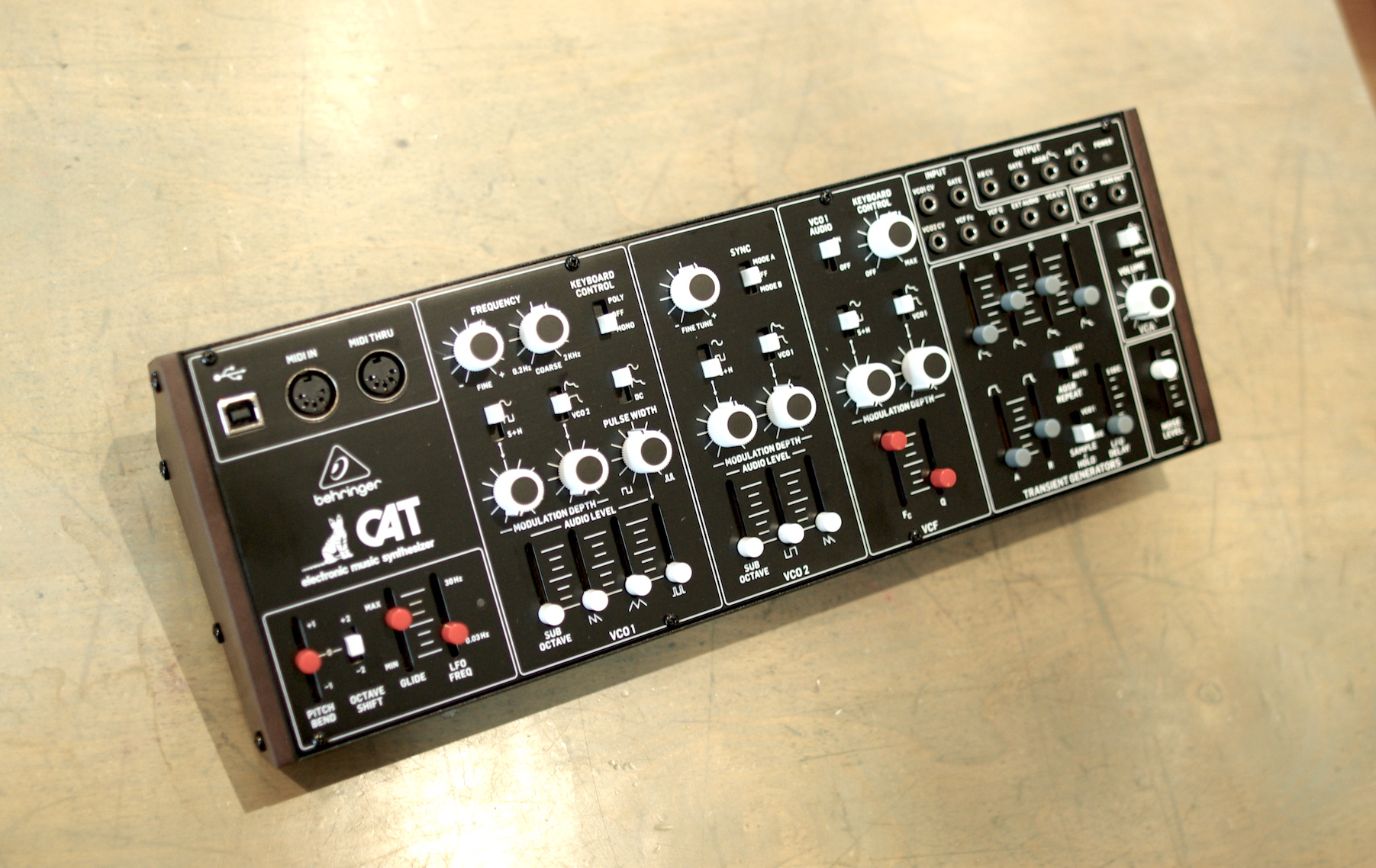 Right at the very end of 2019, Behringer rounded off a busy 12 months by confirming the arrival of another new synth, bringing to an end a year in which the company had already teased and released countless clones and reboots of classic instruments.

While the brand’s analogue R&D department has largely focused on big hitters up to now – classics from household names like Moog and Roland dominate their catalogue – this final offering was something a bit different. Released in 1976 by the relatively short-lived New York synth brand Octave Electronics (later Octave-Plateau), the Cat was a two-voice synth (purely analogue, of course) which legend has it featured circuitry so heavily inspired by the ARP Odyssey that Alan R Pearlman’s eponymous company threatened legal action.

These days an original Cat will cost you well north of £1,000 if you can find a good one, but it’s certainly not as well known as its contemporaries such as the Minimoog or Odyssey. Hardcore synth nerds will say that the Cat is a bona fide 70s classic, but the more honest appraisal is that it’s been forgotten by a lot of people, making it a slightly surprising choice for Behringer to draw inspiration from.

Behringer’s take on the synth follows the Cat formula closely, albeit in a desktop module design rather than the keyboard format of the original. At face value it’s a simple two-oscillator synth with a strong choice of saw, triangle, pulse and sub-oscillator waveforms, a noise source, sine/square wave LFO and two envelope generators, but there are a couple of small modern upgrades like MIDI over USB or DIN. 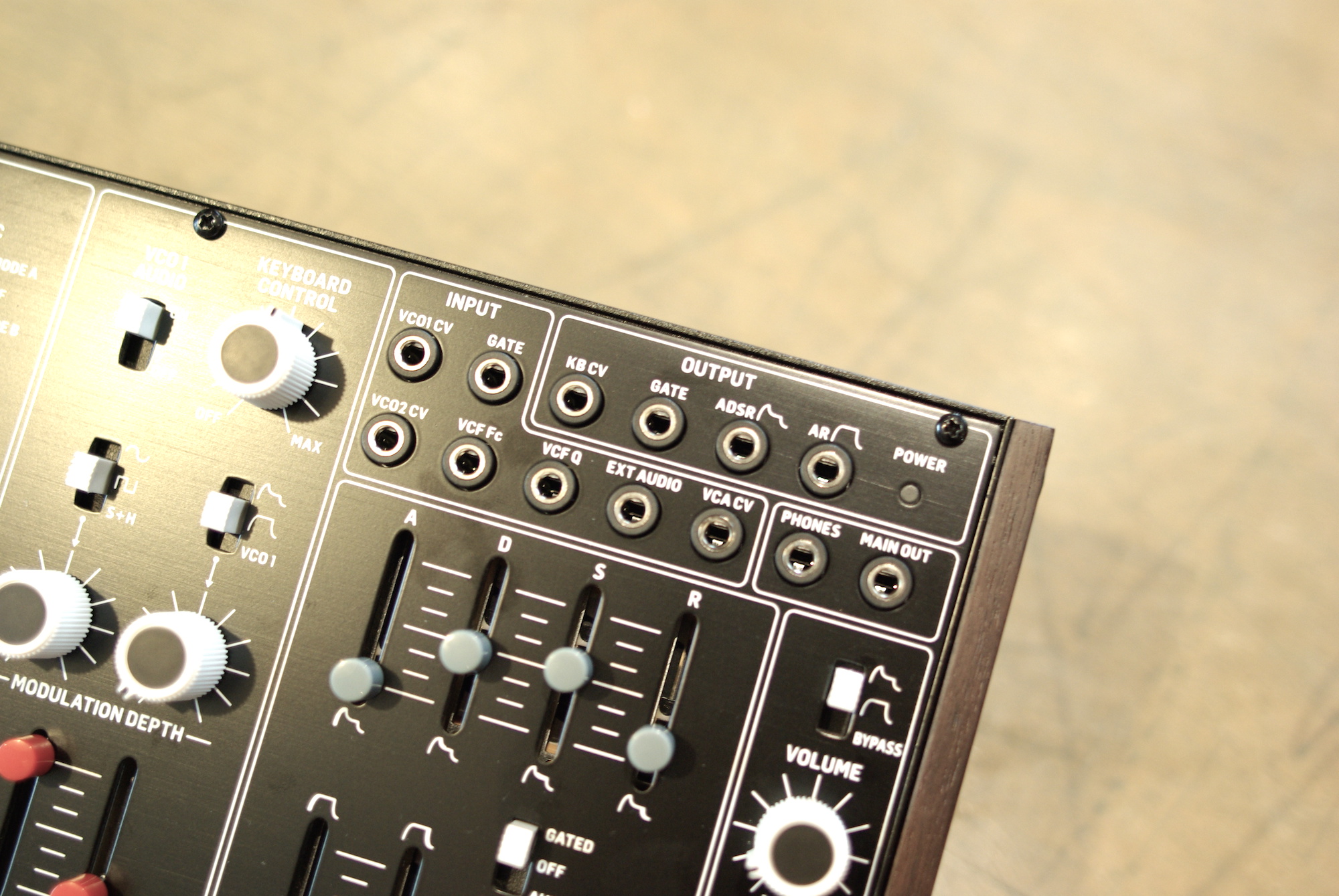 In terms of spec and sound, the Cat is obviously heavily indebted to the Odyssey, but the Cat offered a bit more range, capable of doing everything from thick and warm bass to searing, harsh leads. An interesting point to note is that the sound of the synth is much less distinctive and less well known than, say, a Minimoog or a TB-303. As such, it’s a lot easier to judge the Behringer Cat on its own merits rather than comparing it to a widely recognisable sound. Having said that, I was lucky enough to have an Octave Kitten to hand during the test, the Kitten appropriately being the Cat’s smaller and slightly simpler offspring, featuring very similar oscillator and filter circuits. It’s clear that Behringer have done a good job of capturing the fat sound of the Octave oscillators (the Kitten only has one, but it’s very similar to VCO1 of the Cat) and the VCF, based around revivals of SSM semiconductors. There were changes to the Octave circuits over the life cycles of the two synths – rumoured to be motivated by that threat of legal action from ARP – but the Behringer is certainly in the same ballpark as this particular Kitten. 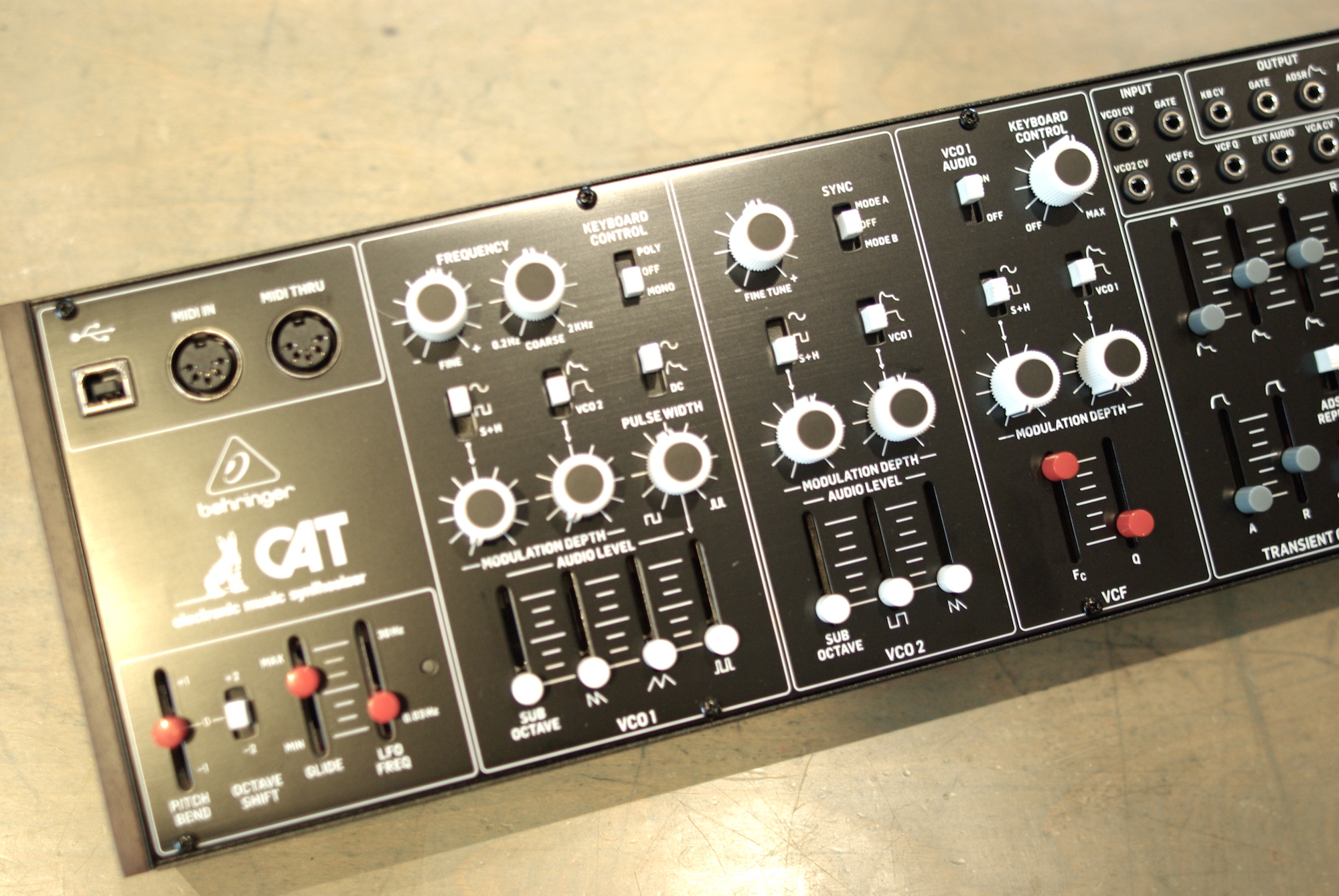 What the Cat immediately delivers is that kind of thick, warm analogue fatness that you’d expect from a 70s synth. Take something as simple as a pulse wave from VCO1 with a hint of PWM from the LFO and a dash of sub-oscillator, play with the filter cutoff (FC) slider in real time and you’ve got the weightiest bass sound you could desire. You can blend all seven raw oscillator waveforms simultaneously in any combinations you like, which can get a little overcrowded if you’re not careful but does allow you to create some particularly interesting lead sounds, with the handy duophonic mode allowing you to play overlapping notes, each oscillator playing independently. There are neat little surprises all over the Cat, such as the fact there are two envelope (‘transient’) generators, one ADSR and one AR, with the ADSR being able to loop and function a bit like a complex LFO. It’s no stretch to say that the Cat probably has the broadest range of any of Behringer’s clones.

Perhaps the biggest strength of the synth is the way modulation can be routed in so many ways, some of which you’d struggle to recreate with most other synths. VCO2, for instance, can be modulated by the LFO, sample and hold, either of the envelopes or VCO1. Any of those same six sources can also be used to modulate filter cutoff. In addition to sync, both oscillators can cross-modulate each other, as well as VCO1 being able to sync to VCO2 in either soft or hard modes (as per the later SRM II model of Cat). The combination of cross-mod and sync allows you to create some really nasty metallic techno sounds and FX.

Although not strictly considered a semi-modular synth, the original Cat offered a fairly decent selection of ‘foot switch’ inputs on its back panel, along with ‘system expansion’ connections to hook CV/gate connections up to other synths or sequencers, plus an audio input to the filter. The Behringer version offers a similar range of connections on the front panel, albeit updated to make them a little more useful for modern musicians (when did you last see a synth player rocking a pitch bend pedal?). The total of 11 patch points on the front panel, not including the headphone and main outputs, gives you a decent amount of connectivity to expand the Cat’s potential via Eurorack modules, other synths, or by chaining multiple Cats together. 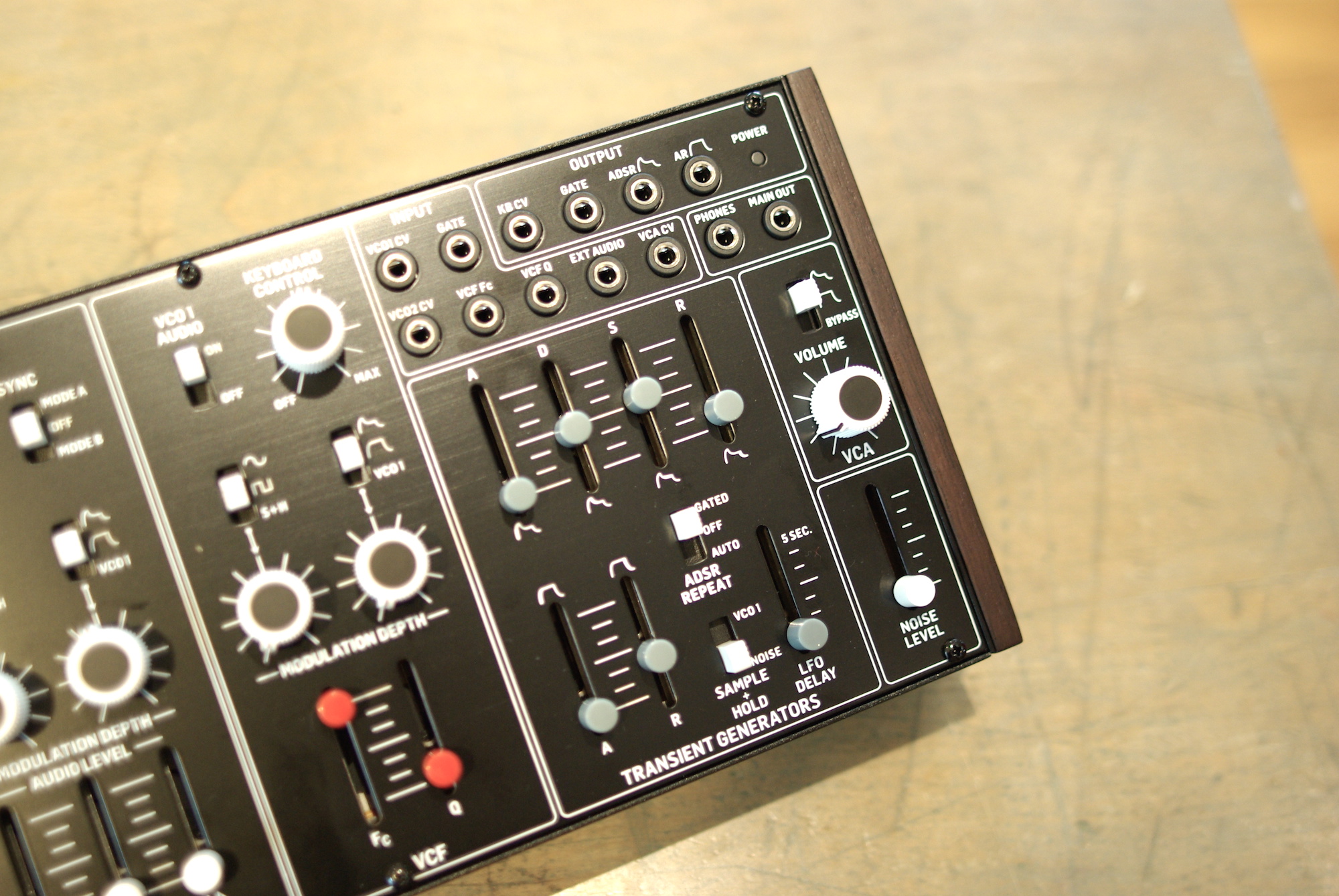 The versatile internal routing options of the Cat mean that there isn’t a huge amount to be gained from patching the synth on its own, but the ability to hook up to other synths and modules does expand your options substantially. CV control of filter resonance is a particularly nice touch, allowing you to route external audio into the filter and take advantage of that screaming self-oscillation.

Above all, the Cat is refreshingly quirky. Features like looping envelopes and the extensive modulation options give it a real character. The basic two-oscillator setup is fairly standard, but if you’re used to other synth brands there are reminders all over the place that you’re in slightly unfamiliar territory, from the pitch bend slider (which doesn’t spring back to its centre point when you let go), through to the fact that the resonance control on the filter section is labelled Q.

With all the focus on clones of well-known Roland and Moog synths, the Cat might not be the obvious commercial hit of the current Behringer range, but it’s a rewarding synth that deserves just as much attention as its more famous siblings. 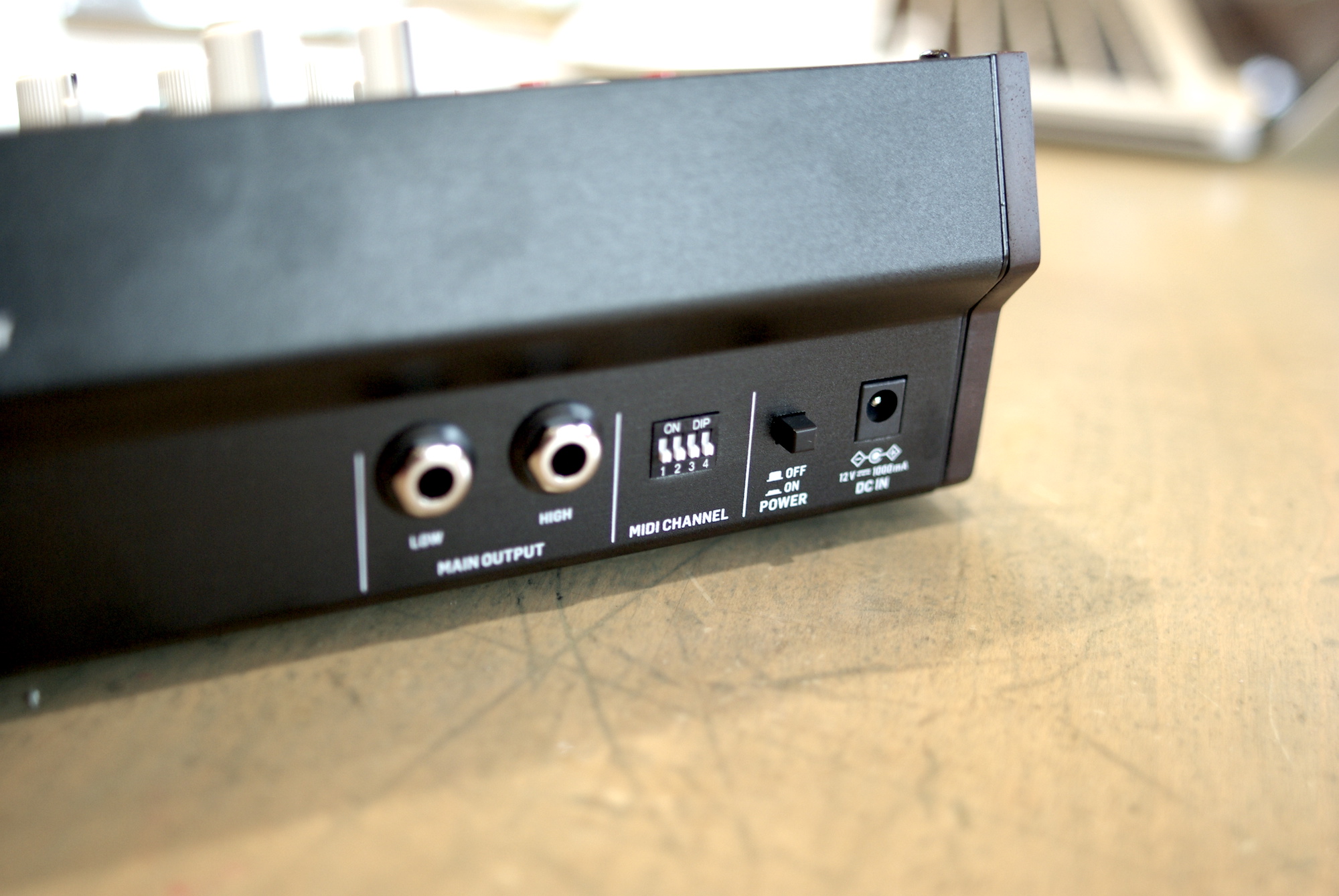