In our modular round-up we review a selection of the best new releases each month, shining a spotlight on our favourites from the fast-moving world of Eurorack. This month, the consistently prolific Erica Synths delivered two modules which couldn’t be much further apart in size and philosophy.

The Erica Synths Fusion Modulator is part of the brand’s Fusion series, which is strictly analogue and usually based around valves. There are no valves this time around, but the Fusion Modulator is still defiantly old-school in its approach, featuring two EMS Synthi-inspired looping envelope generators, a built-in VCA, noise source and sample-and-hold. It’s intended mainly as a modulation source for continuously evolving patches, and the Synthi-style envelopes are the key to that: the waveform ramps up from zero to its maximum with adjustable attack, on, decay and off times.

There are simultaneous bipolar (-5V to +5V) and unipolar (0 to +10V) outputs on both EGs, allowing them to be used either as LFOs or envelopes. The real complexity comes when you start modulating the envelope generators themselves, which I found particularly interesting by getting the two modulating each other. Decay time can be controlled by CV, while the envelopes can also be reset to the end of the on phase by a gate input. At its fastest settings it’ll go into audio rate for some killer subby drones, white at its slowest each cycle is getting on for six seconds long. It’s a fairly big module at 22 HP, but it’s worth the rack space if you enjoy the “what-if-I-try-this” approach to modulation; it’s one of those modules that rewards simply messing about with the knobs and seeing what happens. The Fusion Modulator is definitely not intended to be an ultra-precise tempo-synced modulation source like, say, a Pamela’s New Workout, but it really shines when it comes to CV control and hands-on fun.

Erica’s Pico Drive also landed this month, and it’s pretty much the exact opposite of the Fusion Modulator: the Pico range is all about compactness, so the brief here is simple distortion in a tiny format. At just 3 HP wide, it’s a mini powerhouse, capable of delivering some pretty intense overdrive with CV control of gain and drive. There’s also a built-in limiter to help guard against clipping. The sound speaks for itself here: it’s a really simple module but it sounds great, particularly on drums but also working very effectively as a wavefolder on synth signals. I found it really nice when used directly after an oscillator in quite a subtle setting, adding some harmonics before patching the signal into a filter. Simple but massively effective, as with most of the Pico modules.

Speaking of oscillators, 4ms’s Ensemble Oscillator is another new arrival this month and one we’ve thoroughly enjoyed playing with. A collaboration with Parisian Matthias Puech (who also worked on the 4ms Tapographic Delay and has developed firmware for Xaoc Devices), the Ensemble Oscillator is a really well thought-out module with a ton of options. Essentially a single digital voice made up of 16 oscillators, it’s virtually impossible to sum up the Ensemble Oscillator’s approach in a single sentence (the manual touches on reference points of Gregorian chants, Iannis Xenakis’s tone clusters, spectral music, Fourier theory, Helmholtz resonators and overtone singing within the first paragraph).

This isn’t a polyphonic oscillator in the traditional sense, although it can play multiple notes at once; there are two outputs, but these are for use in stereo, with the oscillators panned left and right in various different combinations according to your choice of mode. The Ensemble Oscillator is, broadly speaking, based on the concept of scales, with the 16 oscillators playing up and down these scales, crossfading between notes. The basic approach is to set the Root knob to determine the pitch of the lowest oscillator (this can also be controlled via CV), then use the unquantised Pitch V/oct input to play the ensemble according to a defined scale. There are 30 built-in scales, ranging from simple octaves, triads and fifths all the way through to more unusual options like Wendy Carlos’s non-octave-repeating alpha and beta scales (and that’s before you even get into programming your own custom scales). All in all, it’ll probably appeal to more experimental musicians, but it’s possible to get interesting results even if you don’t always understand exactly what’s going on. At the very least, the Twist (phase distortion), Warp (wave distortion) and Cross FM controls allow you to experiment with timbres. 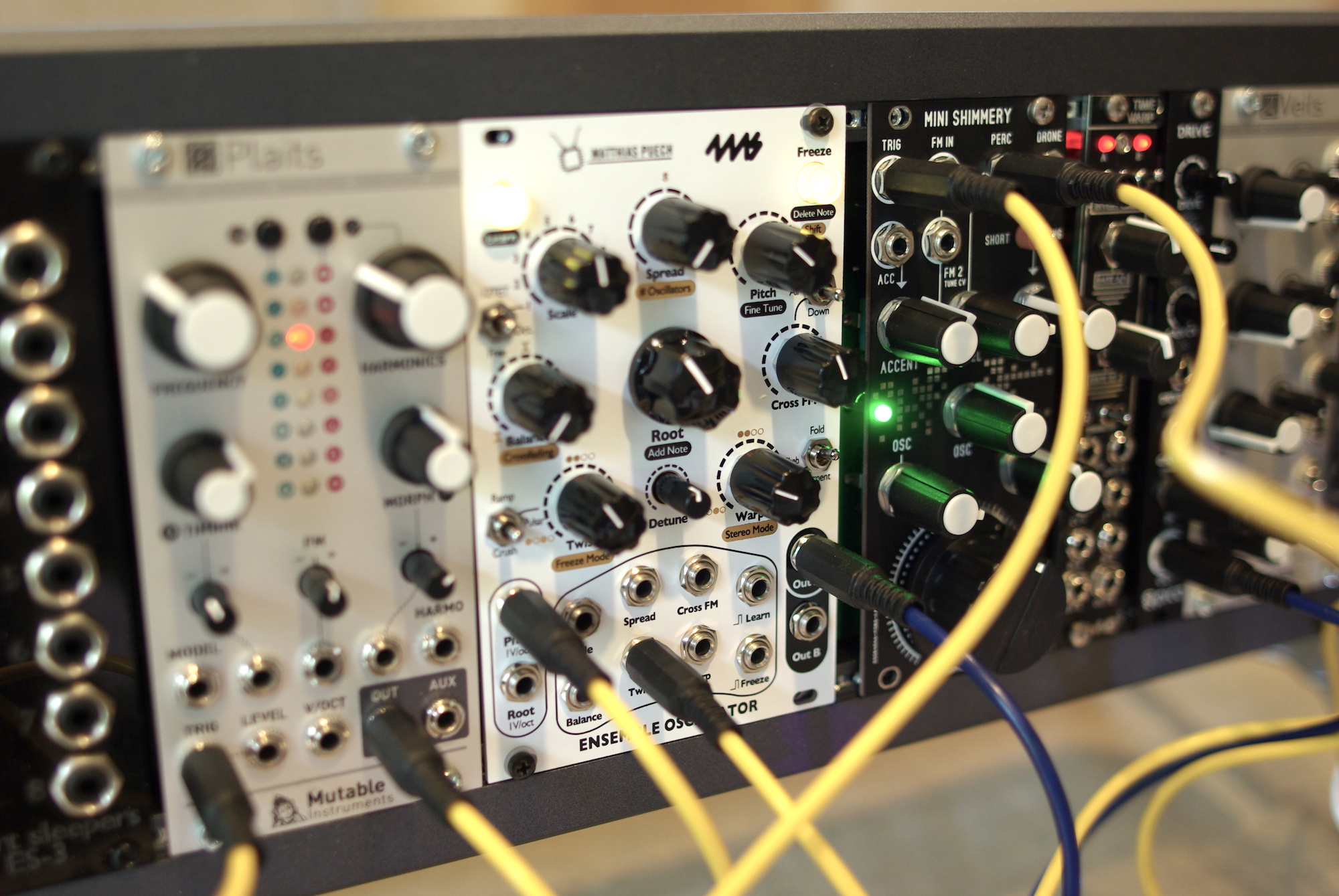 The mk2 version of the Blue Lantern Modules Mini Shimmery is a fairly minor update of the popular original, but one that improves things more than you might expect. The Mini Shimmery is a simple percussion/drone module using three ring-modulated square waves to produce ‘shimmering’ metallic sounds, with a built-in Roland TR-style ‘dirty transistor VCA’ to shape the raw sound into a percussive hit.

It’s not the most versatile percussion module in the world, but it’s not really trying to be. This one’s all about metallic sounds, but that doesn’t mean you can’t do some interesting things with it. I found the best approach was to listen to the drone output first while adjusting the three independent oscillator pitch controls to get a nice tone, then adjust the tuning with the big new master tuning knob.

The Mini Shimmery serves up raw, clangy, metallic sounds with ease, but with a bit of work you can also tame the sound just enough to get some precise, aggressive techno hi-hats out of it. It’s worth pointing out that you can get cleaner percussive sounds by taking the drone output to a cleaner VCA, but the internal VCA is neatly matched to the character of the oscillator circuit, giving it a nicely edgy sound. The new. Good value as a dirty percussive all-rounder with a nice sideline in metallic drones.

The WMD Time Warp is the simplest module this month, but one which reveals a lot of hidden talents when you start to play with it. The most obvious application of this little 4 HP dual gated slew module is to apply a slide/glide to a CV signal such as the output of a step sequencer, adding a nice acidic portamento effect whenever the gate signal is applied (with no gate signal present, the signal passes through unaffected). What’s particularly well considered in this case is the way WMD have thought about what else could be crammed into the small format to expand the capabilities of the unit: flip the toggle switch at the top to invert the logic of each slew circuit independently, applying slew only when a gate signal isn’t present; switch between symmetrical and asymmetrical modes for both slews to adjust up and down slew times independently; unplug the gate cable and each circuit becomes an envelope follower; patch in a voltage signal and the unit can be used as a simple ASR envelope generator. Very clever stuff.