Dozens of keyboards are released every year, but it’s hard to remember the last one which caused as much excitement as Arturia’s new KeyStep Pro. The basic idea of a polyphonic step sequencer in a keyboard format is already familiar from the original KeyStep, but – in much the same way as the brand’s BeatStep Pro drum sequencer expanded massively on the capabilities of the smaller BeatStep – the KeyStep Pro is a huge leap up from the KeyStep.

The KeyStep Pro is based around a four-part step sequencer, the first of which can be set to a dedicated drum sequencer mode, while all four can also act as polyphonic note sequencers. The back panel hints at the extensive CV/gate connectivity: there are MIDI inputs and outputs over DIN and USB, but the rest of the panel is dominated by an extensive array of 3.5mm analogue outputs: CV, gate and velocity/modulation for each of four voices, plus eight individual drum gate/trigger outputs and three sockets for analogue clock in/out. The way that the CV outs can be assigned is simple but clever and immediately gives you a clue as to how carefully the design of the KeyStep has been considered. Each of the outputs can be assigned to its own sequencer track, giving you control of four separate monophonic instruments, but they can also be assigned together, meaning you could have one four-note polyphonic track or any combination in between. Similarly, the modulation output is assigned to velocity by default, as you might expect, but can also be assigned to aftertouch from the keyboard. You can also edit the velocity value on a per-step basis, meaning that this can effectively be a dedicated modulation source for each step the sequence.

It seems clear that the KeyStep Pro is heavily intended for use with hardware synths and drum machines, and especially modular synths. While Arturia themselves don’t actually make any Eurorack modules (yet), they have dipped their toe in the water with the RackBrute racks, but more importantly their Brute synths are all semi-modular and follow the voltage conventions of most Eurorack gear, allowing them to integrate nicely. The KeyStep Pro will also play nicely with hardware from other brands, of course, but it’s satisfying that the Arturia product range is becoming a microcosm of connectivity in its own right. 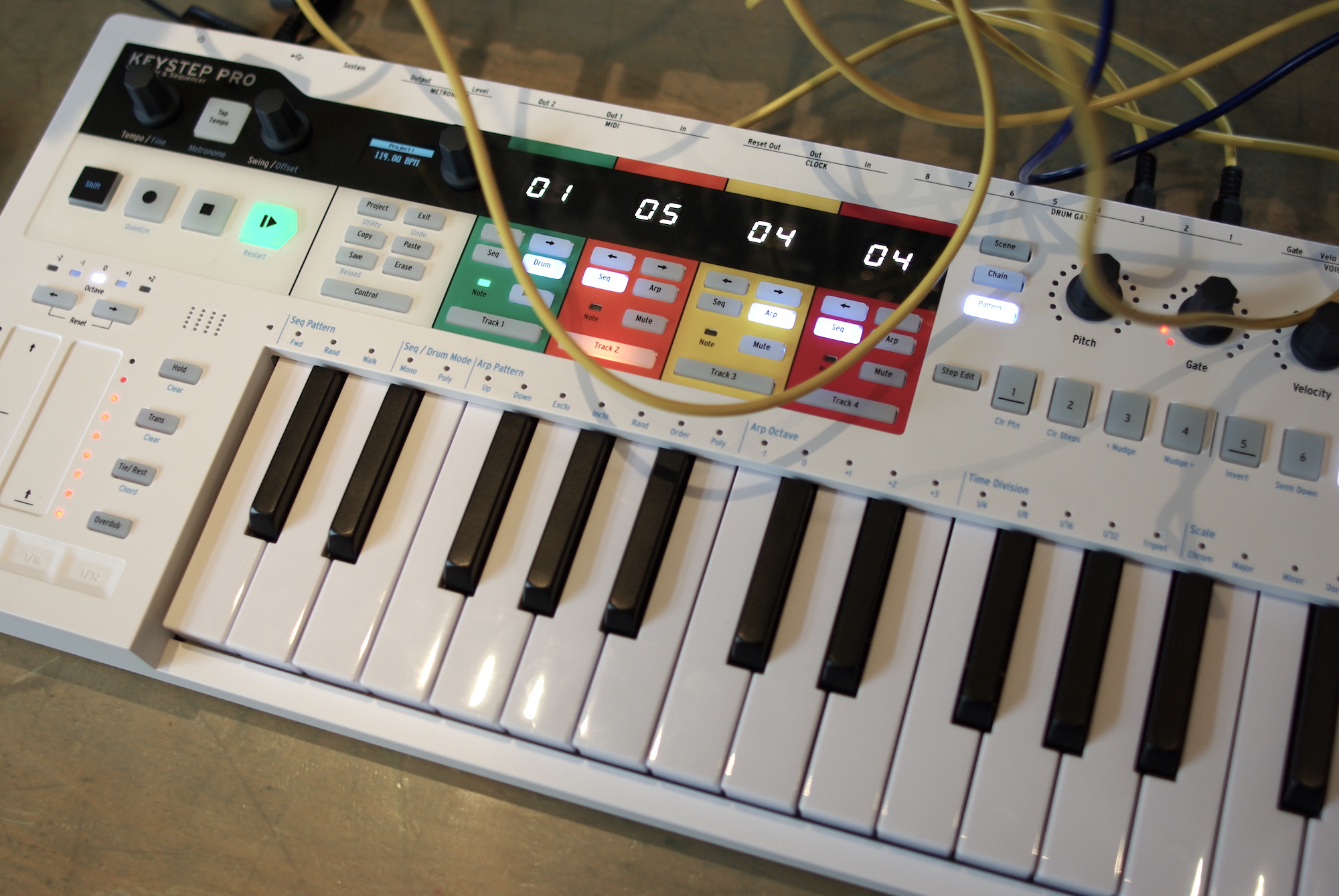 The KeyStep workflow takes a little bit of time to get your head around, simply because there’s a lot more to its feature set than you might initially realise. Recording melodies and drum patterns into the sequencer in real time is the easiest place to start, but I found that I particularly enjoyed editing patterns in step mode after recording them, tweaking the parameters of individual notes to layer up more complex modulation and . As with the original KeyStep, polyrhythms (or, more accurately, cross-rhythms) are a particular area where the KeyStep Pro shines; the default pattern lengths are 16, 32, 48 or 64 steps, but the Lst Step button allows you to set a pattern length anywhere from a single step up to 64 steps. Uneven pattern lengths give you that classic woozy, disorientating rhythmic effect where melodies shift place in the pattern with each loop of the sequence. Instant 80s deep house goodness in the vein of Larry Heard’s hardware-driven Gherkin Jerks project. Cleverly, in drum sequencer mode, Track 1 allows you to set independent lengths for each of the trigger sequences, which allows some amazingly complex trigger patterns to be created quickly and easily. 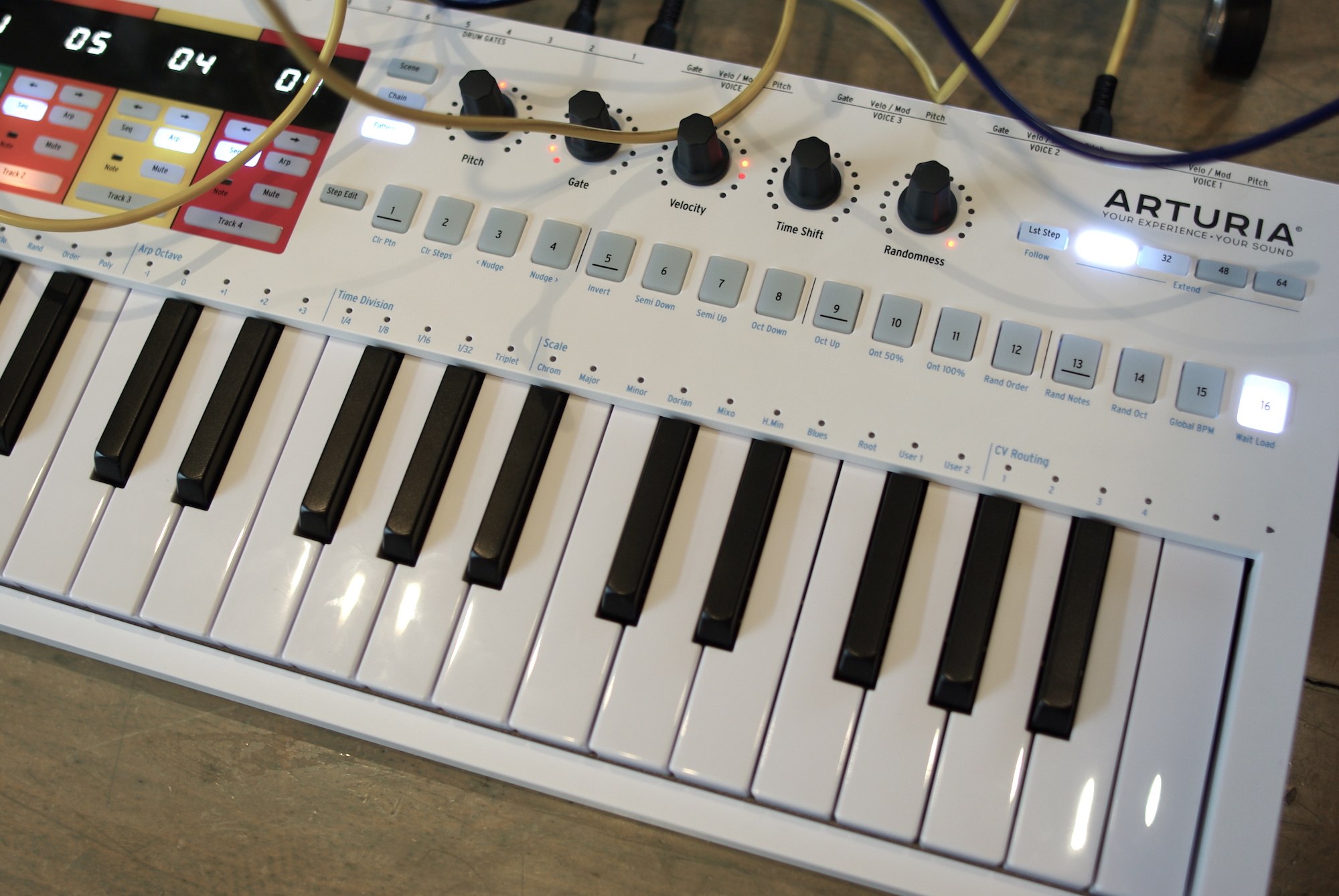 I have large hands and prefer the feel of full-size keys most of the time, but Arturia’s own slim keys here feel like the right choice: the KeyStep Pro isn’t meant to be an out-and-out controller, and full-size keys would mean either a much bigger format or a smaller octave count to retain the compact size. Instead, the mini keys offer a good tradeoff between feel and portability; the KeyStep Pro will inevitably appear in a lot of live rigs, just like the other Step units. A few of the device’s features appear tailor-made for live performance. There are some relatively common performance options like a very good arpeggiator, chord memory and a Poly mode which combines the two, with chords following the arpeggiator. More unique are the performance controls which allow you to manipulate sequences on the fly, either with full control over things like transposition, or with a degree of randomisation.

Hooked up to a modular rack, it’s immediately impressive just how many options the KeyStep Pro presents you with. Polyphonic sequencing is particularly hard to implement well with CV/gate, but the Pro really does make it surprisingly easy. You don’t necessarily need a polyphonic VCO module (although of course that’s the logical choice), and in fact I found that some of the most interesting effects came from routing a polyphonic sequence to a few different oscillators with contrasting patches, allowing a kind of pseudo-random allocation of sounds to notes in the pattern. There are also some interesting effects to be achieved by using a dedicated sequencer track exclusively to generate modulation for another sequence, programming them to act as modulation sources.

Although the KeyStep Pro wouldn’t necessarily be the obvious choice for anyone who solely wants to control software synths, it is well worth reiterating the point that it can output all of its sequences via MIDI as well as CV/gate. The analogue side of the device is more noteworthy in terms of the fact that nothing else around this price point really gives you the same level of flexibility for sequencing modular and analogue hardware, but the inclusion of MIDI over DIN or USB is important not just for sequencing MIDI hardware but also as a bridge between a DAW and hardware synths: the KeyStep Pro can sit in the middle, taking a clock signal from the DAW and making it easy to control analogue synths or modular gear.

The KeyStep Pro really is unique at this price point. Maybe it’s unfair to compare a sequencer with the average MIDI controller keyboard, but it’s hard to think of another keyboard that offers such seamless and creative integration with analogue synths. Whichever way you look at it, sequencer or controller, the KeyStep Pro raises the bar.
Greg Scarth
More info/buy