The updated version of Polyend’s excellent Medusa synth and sequencer reminds us why it’s been so popular.

It would be a bit of a stretch to say that the Polyend Medusa has been a surprise hit, but the extent to which it’s become a cult favourite since its original release in 2018 might even surprise the young Polish brand themselves. The release of a limited-edition Medusa Black model and significantly updated version 3 firmware gives us the perfect opportunity to take a closer look at what’s made it such a success.

Billed as a Polyend product, the Medusa is actually a collab with Greek analogue synth specialists Dreadbox. The two brands have more or less split the work down the middle according to their skills, with Polyend taking care of the digital side in terms of the sequencer and Dreadbox handling synth duties – in this case, a hybrid synth engine based around the brand’s analogue expertise but with a healthy sprinkling of digital features to make it more versatile.

This limited edition Black model is essentially identical to the standard hardware but with a minimalist front panel design, giving it a cleaner and slightly more aggressive look. Aesthetics aside, it’s the same internal hardware as the original version, with the grid-based sequencer on the left-hand side of the unit and the controls for the synth section over on the right. As a bonus, there’s also been a price drop to coincide with the release of this limited-edition version.

At heart, the Medusa is a combination of sequencer and polyphonic synth. There isn’t necessarily anything new about that concept, which has been around since at least the early 80s, but looking back it’s hard to think of all that many polyphonic synths which really did a great job of it. Most of the classic synth-sequencer combos (think Roland TB-303 or SH-101) are monophonic, and the arrival of DAWs perhaps took the pressure off hardware synth developers to focus on sequencing. Polyend do things a little differently to most brands – as evidenced by their forthcoming Tracker sequencer, the first of its kind – and the Medusa shows how. The sequencer is based around an 8×8 grid of touch-sensitive pads and a sequencing approach derived from the brand’s Seq sequencer. You can step sequence, you can play it live in real time, you can record patterns from the pads or you can, of course, control the synth engine from an external MIDI signal. It’s hugely versatile and capable of being used in different ways to suit your personal approach to making music.

The synth engine is brilliantly versatile, with a combination of analogue oscillators and filter, digital oscillators and wavetables. As with the sequencer, it’s a setup that allows you to work in lots of different ways and head down whatever route best suits your musical style and your approach to writing or performing. Huge, pulsating analogue baselines? No problem. Subtle wavetable chords? Sure. Searing hybrid leads? Of course. It’s an all-rounder of a synth, but notably one that lends itself very well to techno. It’s unsurprising that Matthew Dear has adopted as a mainstay of his setup for work under his Audion alias.

Polyend have a good track record of updating and developing the firmware on the Medusa, and while the recently released version 3 update perhaps isn’t as big as the 2.0 update from last year, it introduces a number of new features. There’s a new random wave option in the LFO section, but the focus is mainly on enhancing the already impressive MIDI integration with external devices: MIDI from the pads can be switched off locally, allowing you to play external instruments on the pads without affecting the Medusa’s own sequences. LFOs and envelopes now send values as CC signals, while synth parameters are also displayed with their assigned CC number. It’s a good reminder of the way the Medusa encourages you to think in different ways: sequence other synths from it, play it with a MIDI keyboard, integrate it with your other equipment in whatever way works best for you.

The Medusa hasn’t been universally loved, of course – there are some people who find its approach a little bit too complex, but that’s absolutely the point of the whole instrument. If you want a basic, simple synth you should probably look elsewhere, but if you want to delve into the huge sequencing and synthesis power of the unit you’ll discover a hugely impressive instrument.
Greg Scarth
More info/buy 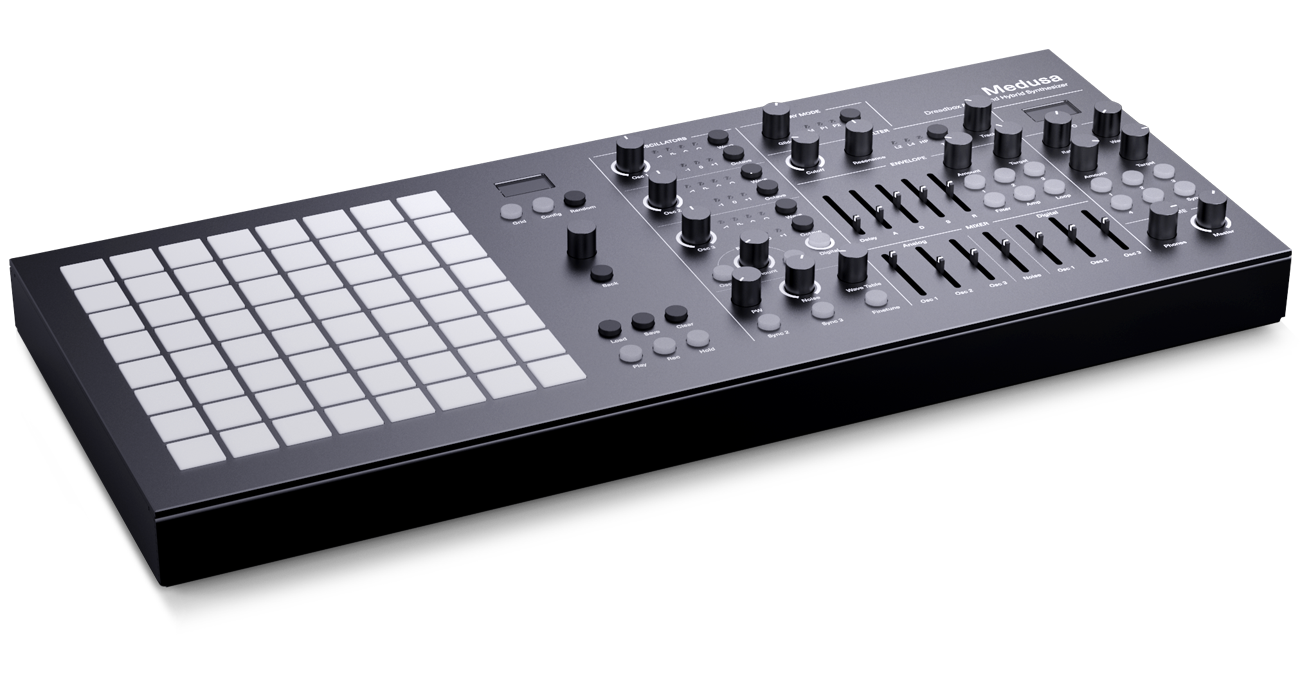