Roland’s new flagship synth is a greatest hits of the brand’s legendary synths and drum machines. 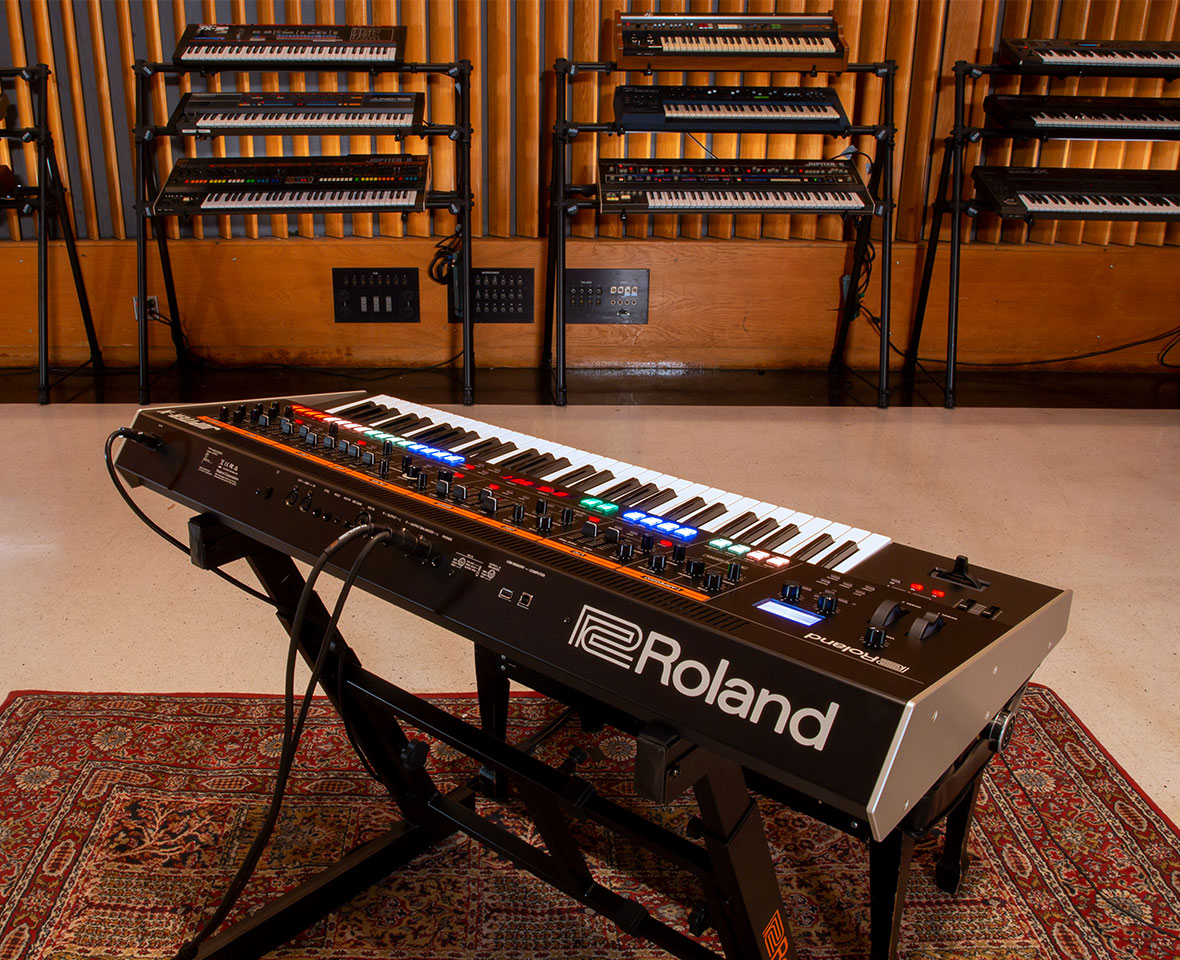 A new Roland synth has always been a big deal. As far back as the late 1970s, when the brand first challenged US dominance of the synth market, every big release has represented a declaration of Roland’s ethos, from the affordable DCO-based analogue of the Juno series in the 80s to the pioneering samples-and-synthesis approach of the D-50 and right through to the present day. The new Jupiter-X is the brand’s latest flagship synth; there are more expensive keyboards in the Fantom workstation series, but all Roland’s own discussion of the Jupiter-X points to it being the top of the range in terms of pure synthesis. 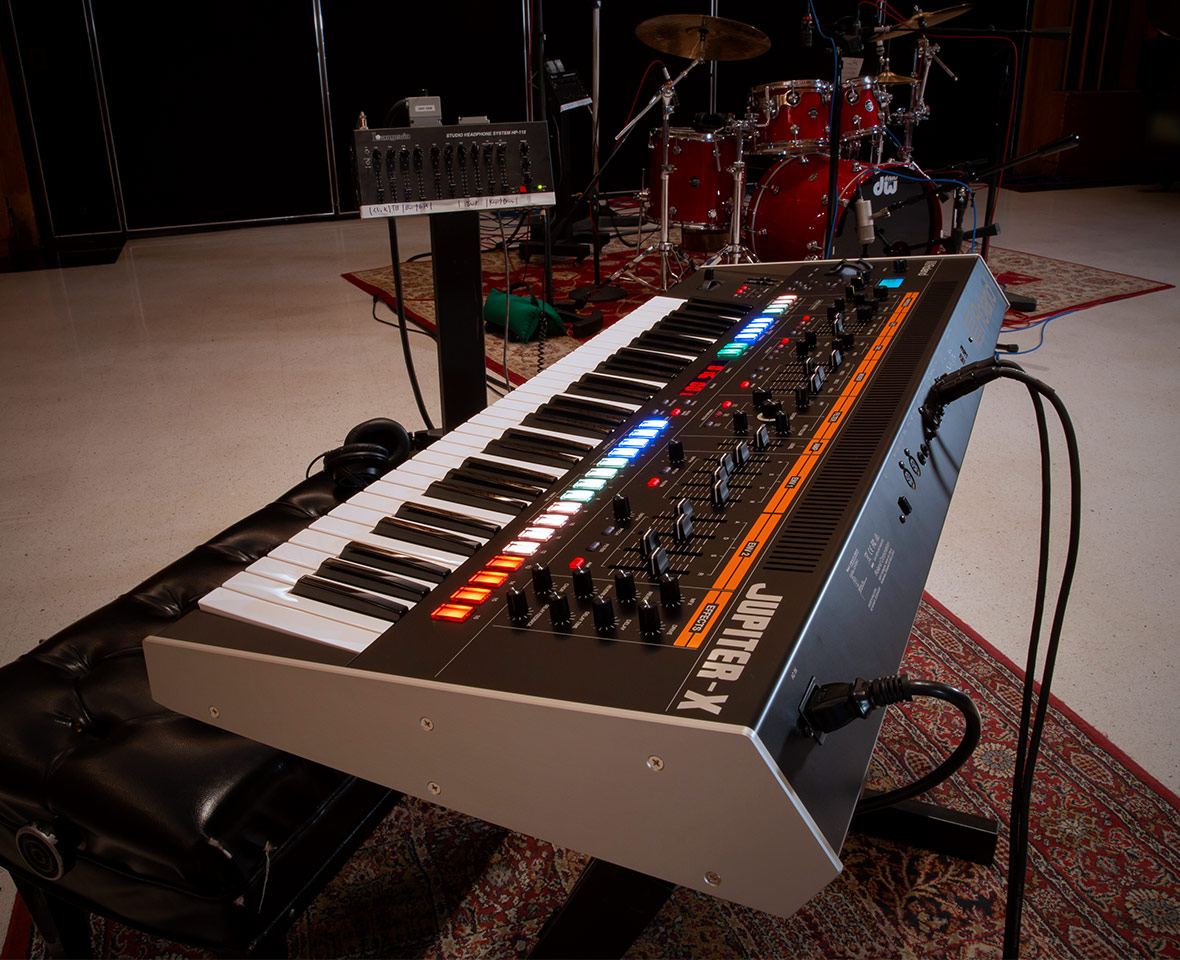 First things first, the Jupiter-X isn’t meant to be a Jupiter-8 reissue or even a reboot. Like the JP-8000 and Jupiter-80 before it, the Jupiter-X somewhat controversially invokes the iconic Jupiter name introduced in 1978 with the analogue Jupiter-4. Roland explain that the Jupiter name represents the pinnacle of their synthesis options. Besides, the Boutique range handles the reissues and vintage clones if that’s what you’re after.

So what is it meant to be? A simple answer would be that it’s the greatest hits of Roland’s enviable back catalogue packaged in a single box, but reimagined as a new approach with a focus on multi-part playback and high levels of polyphony. We saw with the slightly more portable Jupiter-Xm how the new ZEN-Core engine works: with models of the Jupiter-8, Juno-106, SH-101, XV-5080 and RD digital pianos, plus various TR drum machines, it’s a gigantic variety of sound engines. 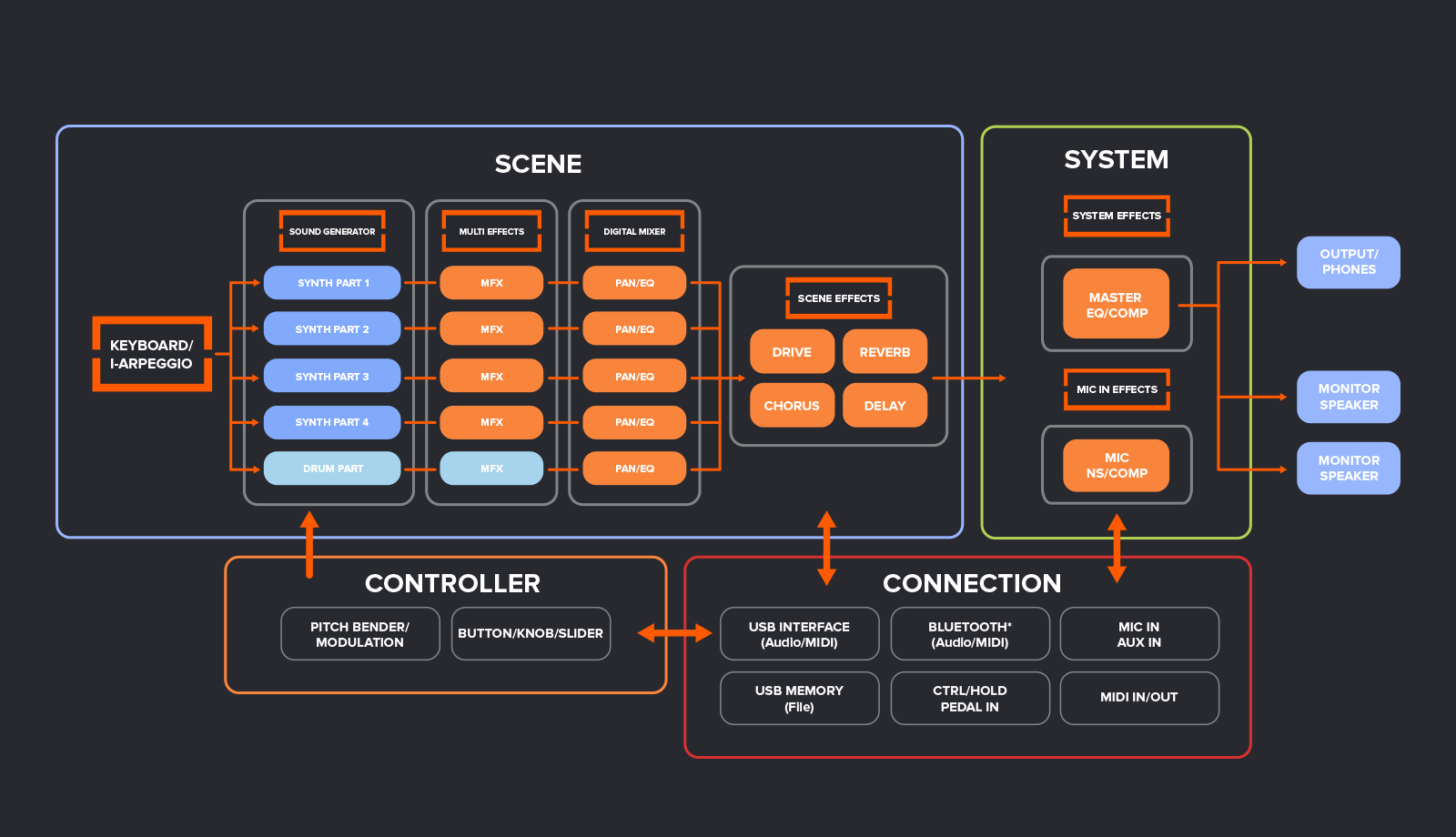 In theory, the ABM (Analog Behavior Modeling) approach of ZEN-Core is less realistic in terms of emulating vintage sounds than the ACB (Analog Circuit Behavior) approach used in the Boutique models. Roland explain that the additional processing power required by ACB would be impractical for the high level of polyphony offered in the Jupiter-X. However, in practice you’d probably be hard pressed to tell the difference without a direct side-by-side comparison; ABM is rich and organic when it comes to analogue sounds, while doing a great job of replicating the more modern digital tones. If you wanted a faithful recreation of a particular analogue model you’d probably go for the Boutique option, but the point of the Jupiter-X is more to offer the variety and depth of sounds which can be layered and played simultaneously. That quick and easy access to classic sounds definitely doesn’t just mean presets, but the ease with which you can dial in a model and use it as the basis for layering and putting together performance is hugely impressive. 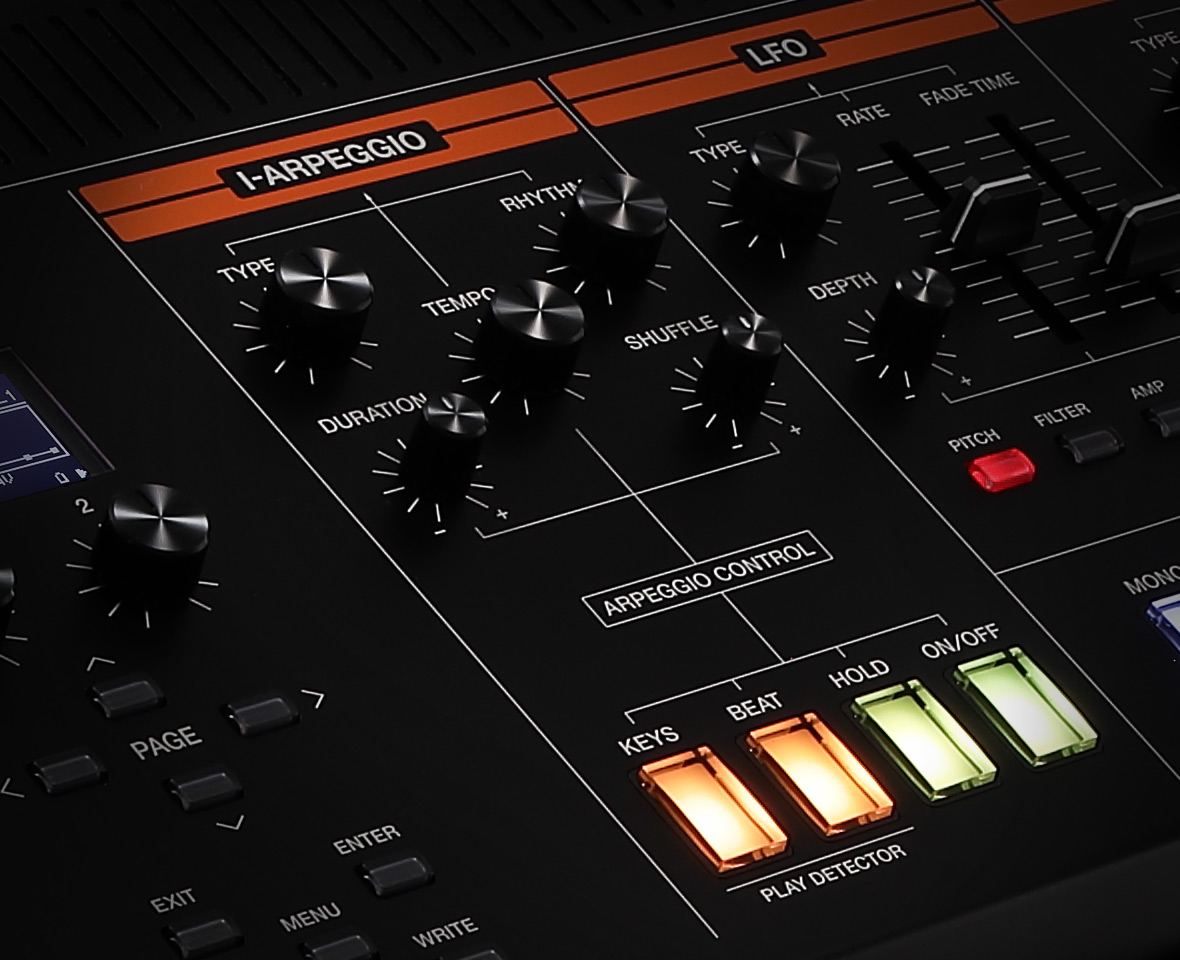 How much better is it than the significantly cheaper Jupiter-Xm? That’s an interesting question. The synth engine of the two models is identical, so the difference comes almost exclusively down to playability: whereas the Xm has 37 compact keys, the X has 61 full-size, semi-weighted keys with the added benefit of aftertouch. Front panel controls are substantially more comprehensive when it comes to programming and tweaking synth sounds, but it’s the sheer size, feel and playability of the X that sets it apart (albeit making it a much more imposing physical unit; at just over a metre wide it’s nearly twice the size of the Xm, and four times the weight at nearly 17kg). If you’re more of a programmer than a player, the Xm is probably a sensible choice, but the X really shines for those with the skills to get the most from it. The inclusion of aftertouch makes a big difference too, really opening up the sound engine (the Xm responds to aftertouch over MIDI but doesn’t generate aftertouch signals from its own keyboard). 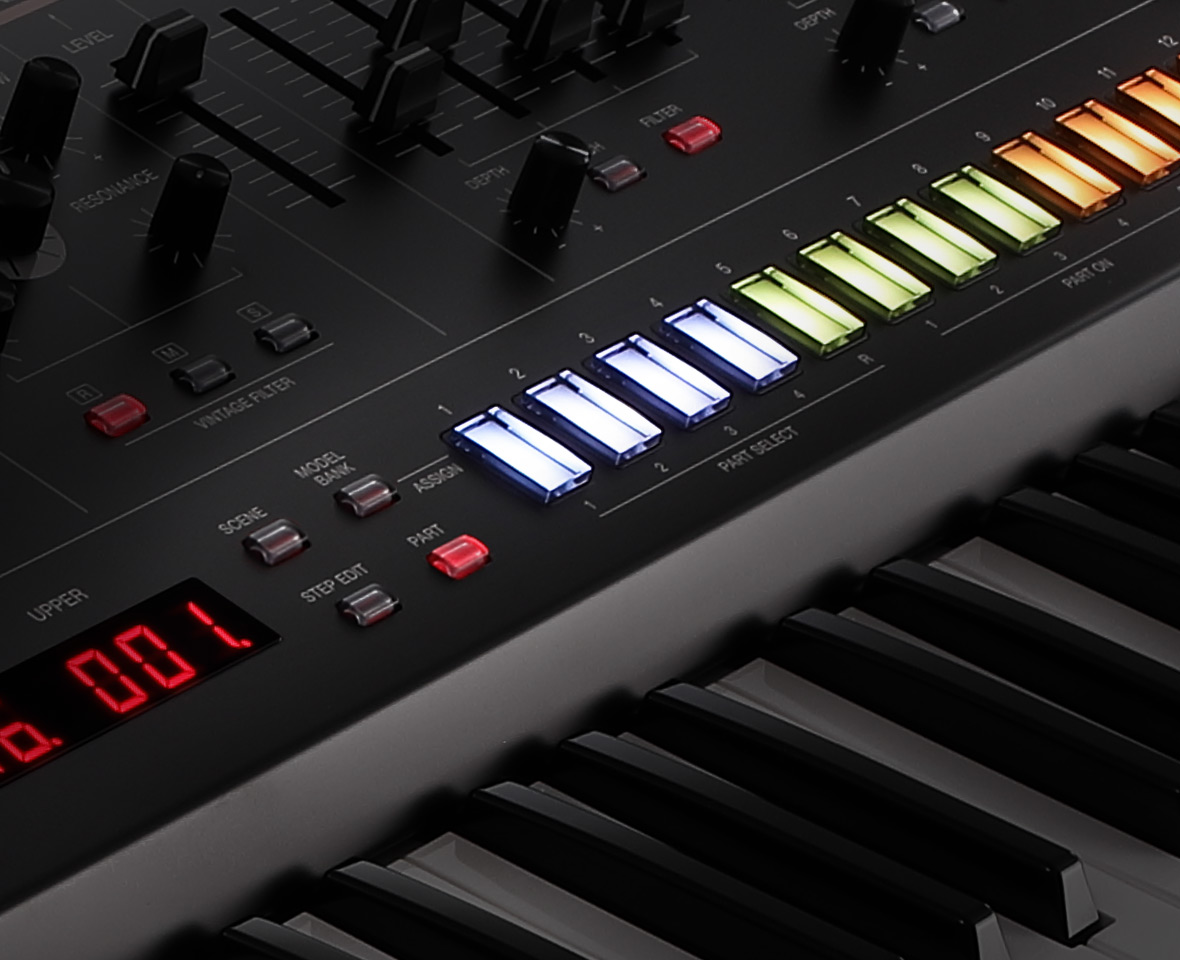 Another pertinent question is who exactly the Jupiter-X is for? This is where it becomes even more important to place the synth in context. It’s a player’s keyboard, but it’s not necessarily designed more for live use than studio use, or vice versa. Ultimately, it seems to come down to the efficiency of access to the sounds and the ability to perform with multiple layers and parts simultaneously: as such, the Jupiter-X feels like it most suits live performers, session players and songwriters who want quick and seamless access to top quality vintage Roland sounds without disrupting the creative process.

As a statement of intent on Roland’s synthesis expertise, the Jupiter-X stakes a very strong claim.
Greg Scarth
More info/buy