Vermona’s new sequencer aims to bring a hint of controlled randomness to your modular racks. 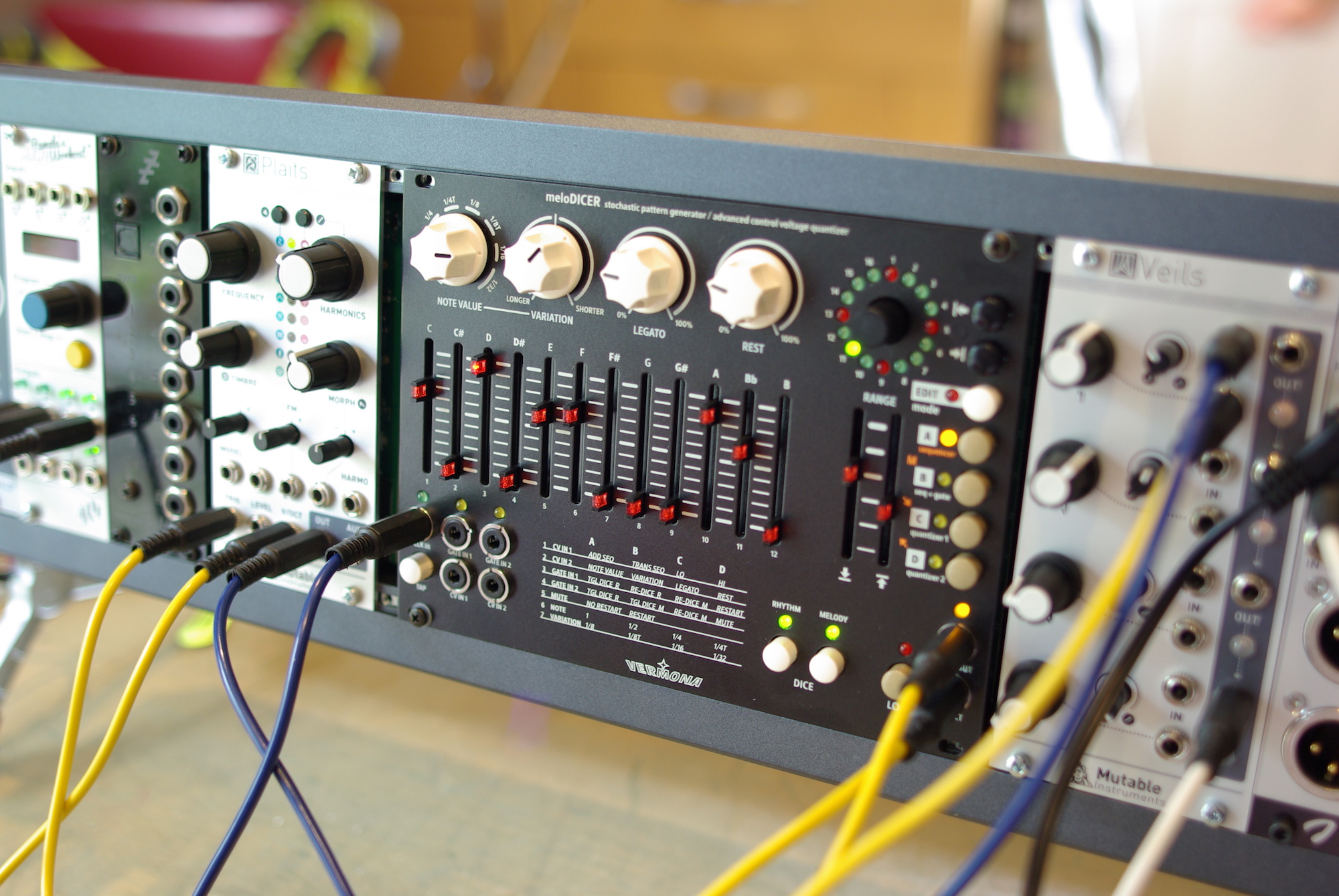 Organised chaos should probably be considered a core value of modular synthesis. Not just in terms of the sprawling mess of cables that you might find on a complex patch – although it certainly applies in that case too – but in terms of what gives life to patches. It’s that hint of randomness, or at least pseudo-randomness, that often makes the difference between a very ordinary synth sound and something much more interesting. From Don Buchla’s legendary Source Of Uncertainty modules through to modern modulation sources like the ALM Pamela’s New Workout and Make Noise Wogglebug, the idea of introducing a bit of controlled randomness to patches remains hugely popular. 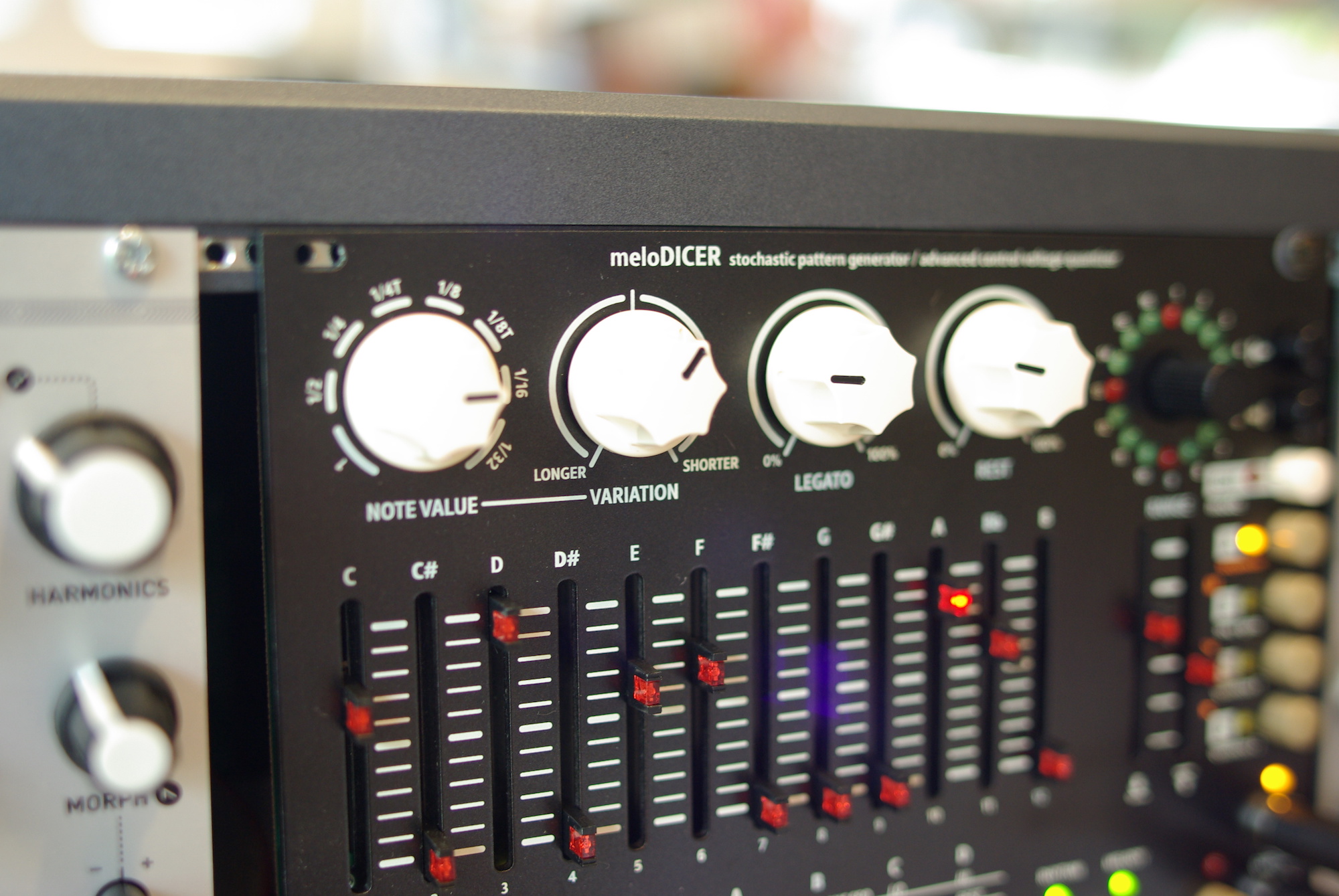 Randomness is perhaps easier to achieve with modulation than with pattern generation, and many CV sequencers stick to the more controlled end of the spectrum, repeating patterns with minor variations at best. That’s where Vermona come in, with the new Melodicer, described as a stochastic pattern generator and advanced control voltage quantiser. The key word here is ‘stochastic’, which we’ll confess we had to look up for a precise definition: “having a random probability distribution or pattern that may be analysed statistically but may not be predicted precisely”. Essentially, it’s a random note sequencer which allows you to control the parameters of its randomness rather than the sequence of notes itself. 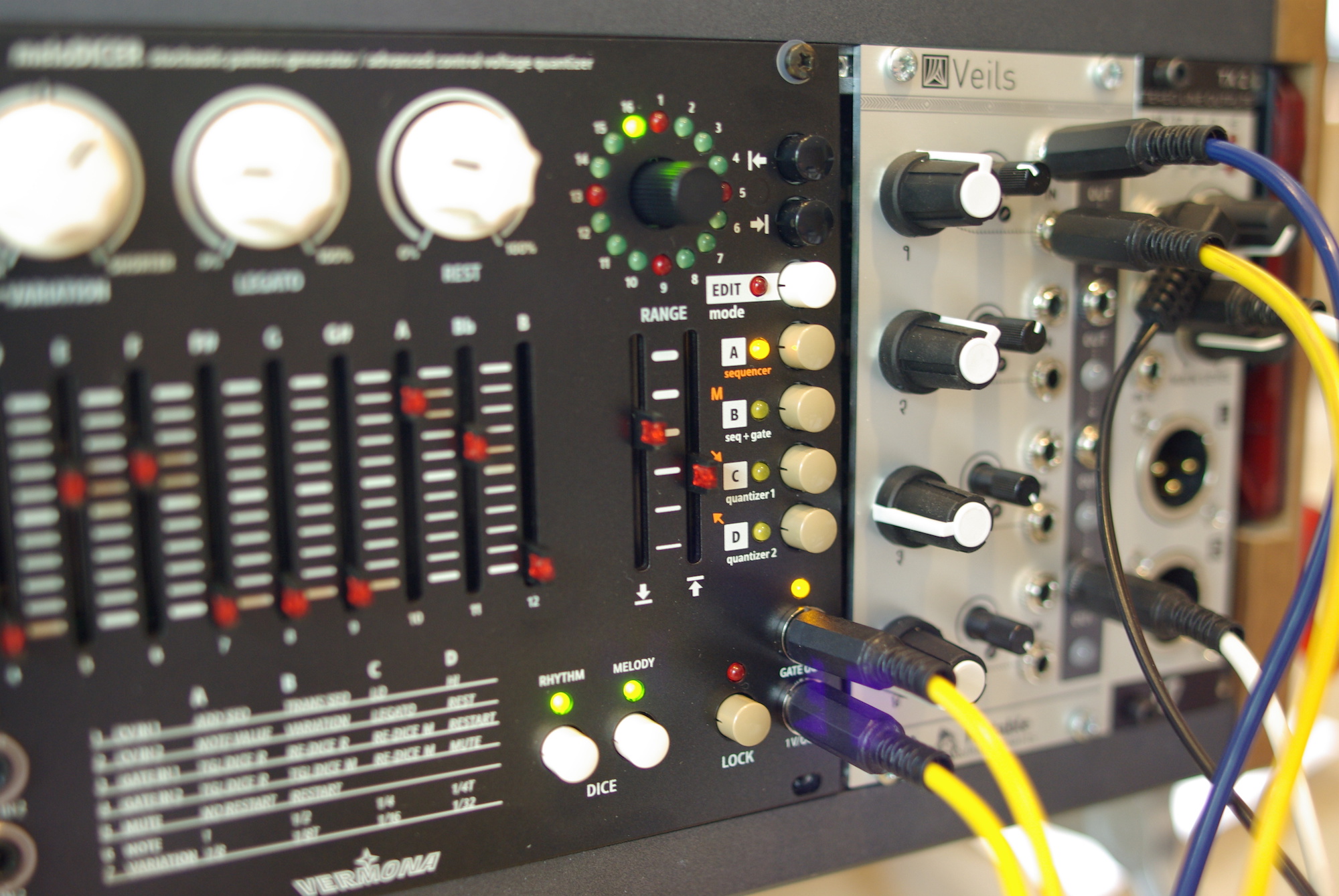 Taking up a fairly sizable 34hp of rack space despite its cleanly laid out front panel, the Melodicer packs a lot into that real estate. Syncing up to an external trigger signal or its own built-in clock with tap tempo, the module immediately starts spitting out CV and gate signals. The central focus, at least initially, is to dial in the probability that each note will be triggered using the bank of 12 sliders, each representing a note. The higher the slider, the more likely it is that the corresponding note will be played in your sequence. The more musically minded can, of course, dial in complex scales, but those of us with only a passing acquaintance with music theory can just experiment until it sounds about right. 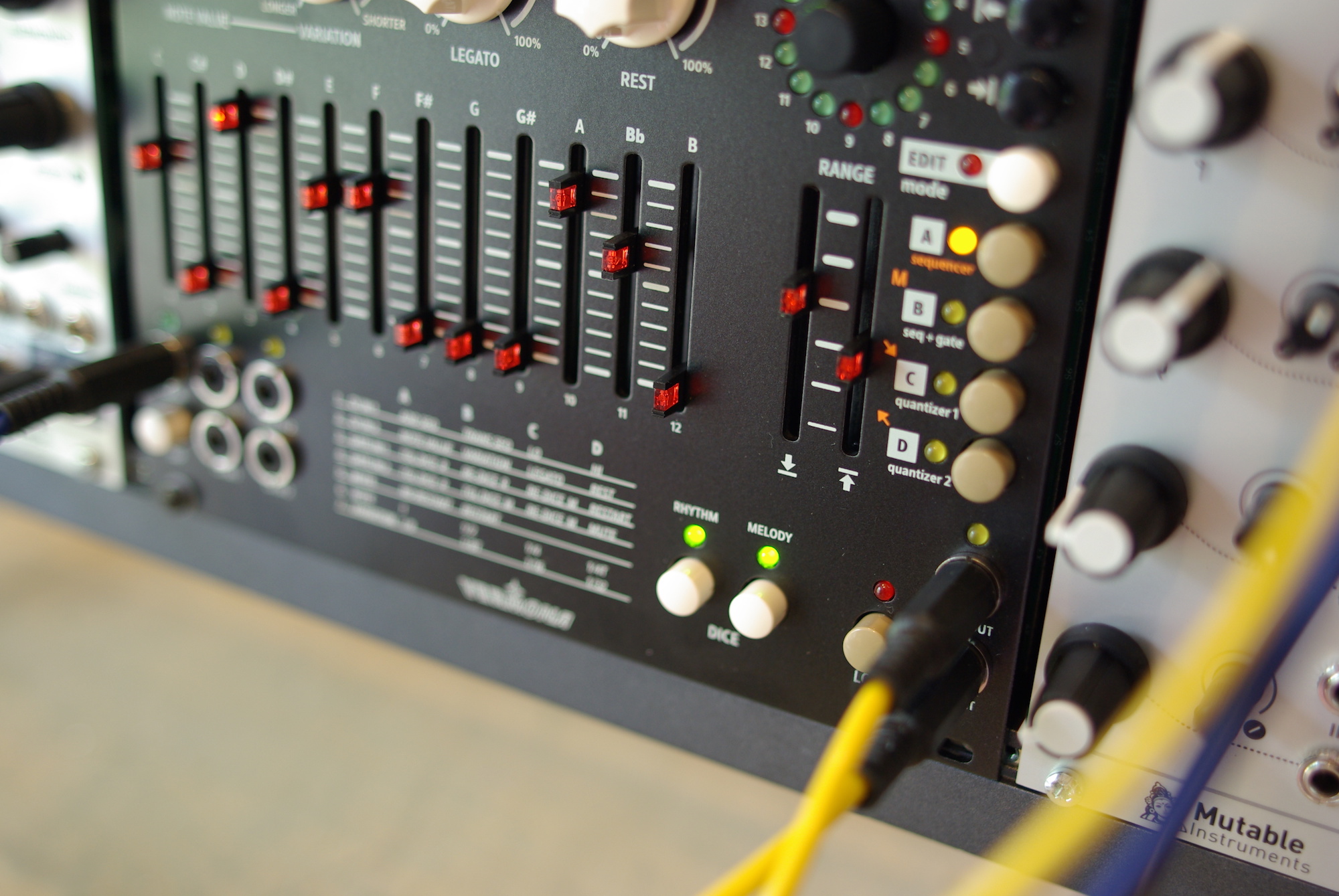 With the notes set up, the next step is to set some rhythm parameters using the four rotary knobs above: note value (i.e. length), variation (the chances that another note length will be triggered), legato and rest. The first control sets the basic rhythm of the sequence, while the latter three control probability. Of the most important main controls, the final ones are the two octave range sliders to the right of the note controls, which determine the range of the pattern. 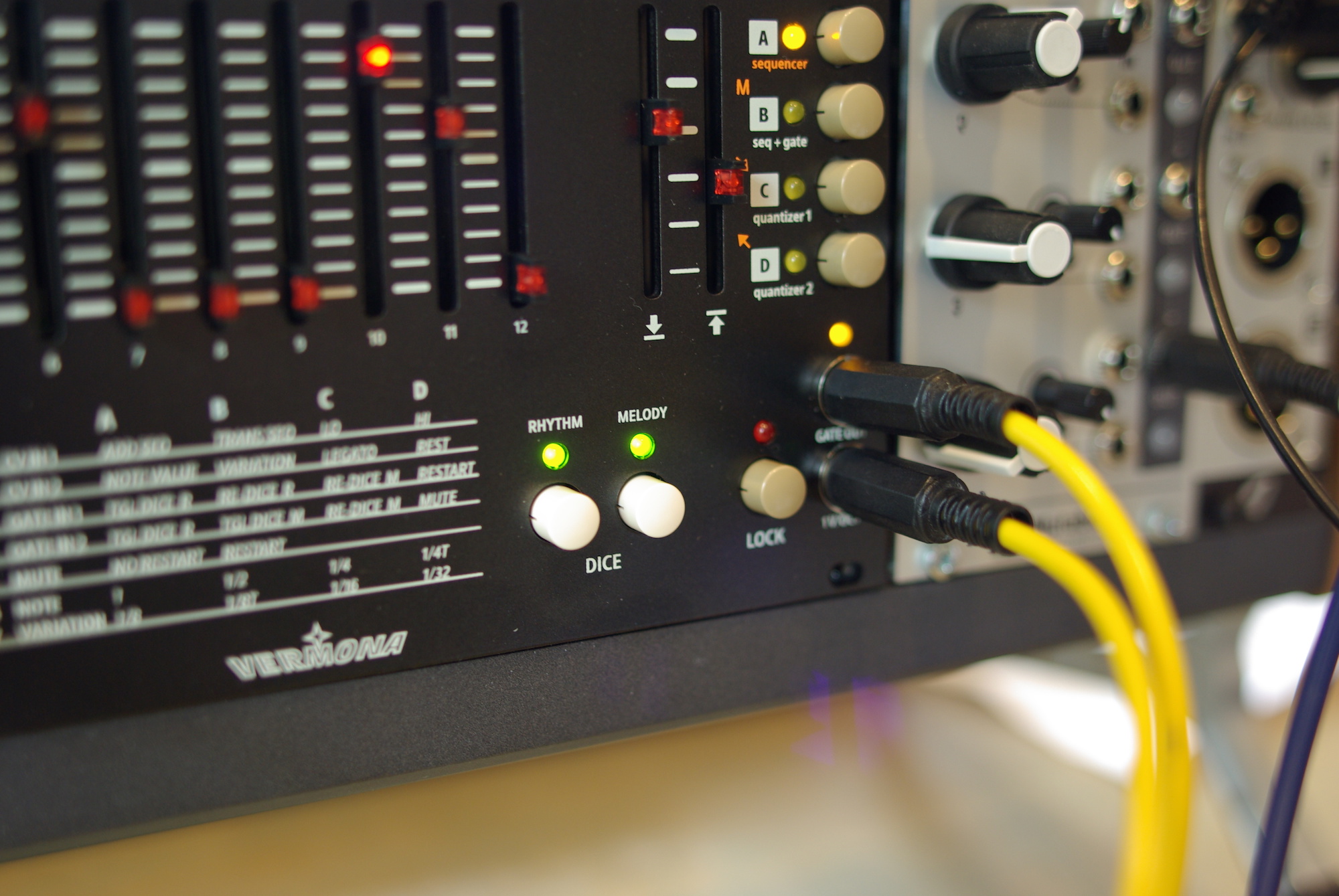 The Melodicer’s main strength is the way it allows you to expand on a randomly generated melody, lock it into a repetitive pattern or mutate and tweak it as you go. Two Dice buttons allow you to ‘roll the dice’ and generate a new rhythm or note selection independently, which then repeats until you hit Dice again. Alternatively, you can hold the buttons down to switch off ‘dice mode’ and set the sequencer to ‘realtime mode’, in which new patterns are continuously generated at random with every repetition of the sequence. This is particularly effective when one part of the sequence is consistent but the other part is allowed to change; the most obvious approach is to lock the rhythm in dice mode, repeating the same rhythm of notes, but leave the melody side in realtime mode, generating new note patterns with each loop. It’s a great way to generate semi-random melodies that feel cohesive because of the regular rhythm. Perhaps it’s just the similarly named controls, but this aspect reminds me of the Arturia MicroFreak’s sequencer, which allows you to introduce randomness using Spice and Dice controls.

Although the Melodicer works perfectly well in a studio setting, its strengths would shine even more brightly in a live performance setting. The ability to ‘play’ the note and rhythm controls in real time while the pattern plays allows you to do everything from subtle variations through to completely bizarre – but thoroughly musical – randomness. As you move beyond the basic functions, you’ll discover huge creative potential: pattern length can be adjusted and tweaked in real time; the sequence can be reset or muted either manually or via CV; a pattern can be locked while you adjust parameters and then unlocked to jump to a new pattern; patterns can be saved and recalled in real time with the sequencer running. As a bonus, the module can also quantise externally generated CV signals, which probably wouldn’t be your primary reason to buy it but adds useful functionality.

The Melodicer strikes a fine balance between randomness and control. Embrace the chaos.