Snorre Magnar Solberg is a Norwegian DJ and producer who recently contributed a podcast to the Juno Plus series and who runs the Club No-No label. His work has been previously described as ‘rainforest techno’, but if this fourth release on his imprint is to fit that description, then the trees would be shrouded in grey mist, the plants’ berries poisonous and the animals that inhabit it wary to venture out before dusk. 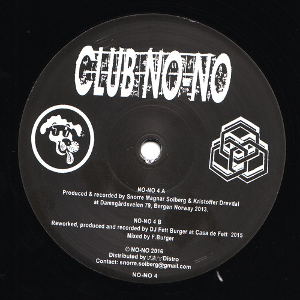 On the A-side, a bird twitters away relentlessly, but it sounds bewildered rather than euphoric. Maybe that’s because it plays out against the backdrop of a dense tribal groove whose central riff slides in and out of key. The overall feeling is claustrophobic and paranoid, unlike the organic sound that other environmentally-focused producers favour (eg the wide-eyed trance of Dominik Eulberg or Nathan Fake). Adding to the sense of mystery is the fact that Magnar Solberg co-authored the track with Kristoffer Drevdal, a fellow Bergen native but a producer about whom very little is known.

Club No-No is musically and spiritually close to the Sex Tags Mania collective and previously Sotofett has collaborated with Magnar Solberg for the second release on the label. This time it’s the turn of his brother Fett Burger, who is in charge of the B-side. Once again, the birds chirp and chatter but this time they have more reason to celebrate; the mood is considerably lighter as Fett Burger delivers a softer but equally hypnotic dance floor track.

Putting an emphasis on woozy filters, the track builds up and down the psychedelic spectrum , but while this is going on it at all time relies on a rickety, steely drum track. It’s a masterclass in spaced-out techno, like a ride down the Amazon at night with just the soundtrack of the wind in the trees and their inhabitants for company.