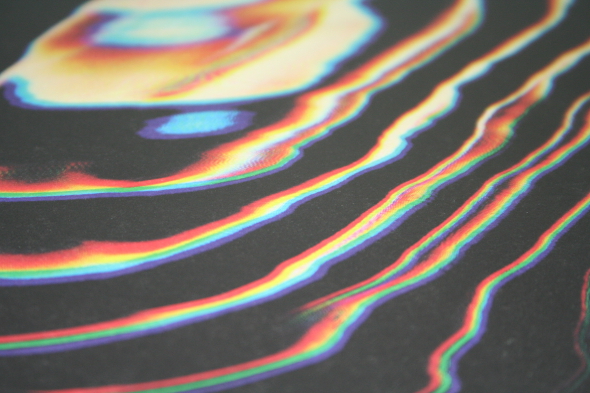 Hieroglyphic Being – The Disco’s Of Imhotep (Technicolour)

While his music may be wildly unpredictable from one project or release to the next, you can at least count on Jamal Moss to keep up such a relentless assault of new music that there will always be something to clutch a hold of. There’s no doubt that much of his appeal, whatever guise he dons, comes from his uncompromising experimental nature, but with such an approach comes lots of challenging material. This album for Technicolour differs in that it has an immediacy that sits easy on the ears compared to much of Moss’ work. That’s not to say it’s any less daring – just check the rugged thump of closer “Nubian Energy” for example – but there’s something straight-up enjoyable about the tracks on here. It whistles by in a flash, but the likes of “Spiritual Alliances” are simply a joy to listen to, and that’s not the normal angle of approach for a Hieroglyphic Being record.
Listen/buy vinyl

After the Forgetting and LA EPs that dropped earlier in the year, Felix Manuel is back with the final installment in his trilogy of records for his regular stomping ground of 2nd Drop, fixing his gaze on a more junglistic frame of reference. You can always count on Djrum productions to have immense levels of depth and clarity, and it’s no different here as “Space Race (Parts 1 & 2)” charges out on a swift, uptempo beat that slices through blissful pad notes in a heavy, moody atmosphere. It’s a melancholic affair but energetic, much like the B-side track “Sometimes I Share (Space Race Part 3)”. Here the introspective swoon of the pads has been replaced by a more upfront attitude as marked out by the vocal licks and surefooted bass, but it’s no less a thought-provoking piece that sports the broad appeal that always seems to linger around Rum’s productions.
Listen/buy vinyl

After his Much Less Normal album received the compliment of being reissued on vinyl by Firecracker, with a follow up single on Unthank, things have been continuing to improve for Lnrdcroy of the ever-vibrant Vancouver house music community. He now makes good on his part in the Mood Hut story and it’s certainly no disappointment. “Ooze City” is the kind of simple hardware jam that a lot of DJs will struggle to keep out of their bags – the wriggling bass is infectious, the swing is funky, the acid on-point. Of such matter are club bangers made. “Aquabus (Plaza Of Nations Dub)” meanwhile reaches for the sexiest of early ‘90s deep house moods, everything stripped back to the bare essentials to let the sensual breathing sample dominate. “Kali Yuga” switches the script with a more dense, tribal thrum and plenty of swirling new age melodics, making this an EP of distinct component parts, all of them utterly essential.
Listen/buy vinyl

The No ‘Label’ series from Rush Hour’s distribution arm continues to mine the most intriguing corners to present exotic sounds from lesser spotted producers, and Ernesto González is certainly an outside operator. Having spent years releasing on and running the Eat The Sun label, he’s since taken his largely cassette-based works to Oaken Palace, Sic Sic and many more besides. In stepping into a little more of the light for this LP, it’s clear to see those of us outside the tape world Bear Bones, Lay Low comes from have been missing out. His is a thick, rich sound where found sounds and heavyweight synthesisers gel together in a clangorous whole, both chaotic and utterly energising at once. There are more curious parts where samples get layered up with abandon, and there are moments of delicacy, but really this is ambient music as a visceral experience without resorting to noise.
Listen/buy vinyl

Having recently been outed as the son of Mark ‘Sensate Focus’ Fell, it’s good to see Rian Treanor pushing his sound into a more unique realm that doesn’t borrow quite so heavily from his father’s distinctive sound palette. His previous EP on The Death Of Rave was no weaker for it – indeed it felt like the plush production values of Fell channeled into a more sharp-edged, beat-focused weapon. There’s still plenty of computer-powered experimentation going on in between the rhythms, and this follow-up record proves that aplenty on opening track “Pattern A1” with its head-spinning stretches of delay feedback and the like. “Pattern A2” meanwhile brings the party with its glassy stabs and stuttering kicks. On the flipside there’s a different shade to the melodic content as it flirts with paper-thin percussion, but it’s no less crafty and satisfying on the ears. Treanor manages a potent mixture of abstraction and impact, and with this record he steps out as his own voice more prominently, so full credit to the man on his own merit.
Listen/buy vinyl 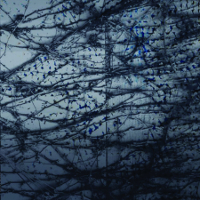 If Robin Smeds Mattila is Human Rays then who is Robin Smeds Mattila? Some surface level scouring of the internet reveals Mattila to be a Stockholm-dwelling ambient producer and visual artist whose graphic designs have made their way to Krill Music (via Charlton’s An End To Good Manners EP) and Daniel Araya’s ARG collaboration with Jonas Rönnberg, aka Varg. It was Rönnberg who gave Mattila a debut as Human Rays on his short-lived Blodörn cassette label with 2014’s Towering Conflict Tape. Following two more tape releases on Ominous Recordings its Seattle’s prevalent Further which provides the Swedish artist with a first vinyl release. This four-track A Tension EP delivers just under 40-minutes of frost, beatless rhythms that are lo-fi that’ll send melancholic shivers down your spine, however the tonal 10-minutes of “Condensity” does have cockle-warming qualities. Fans of Michel Isorinne, Varg and Posh Isolation beware.
Listen/buy vinyl 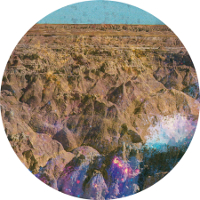 In Greek mythology Gaia is pretty much everything good about the planet; the personification of earth and life, aka Mother Nature. Edward’s Desert Sky project has always played on environmental themes; dusty beats and wind chime melodies that play on spiritual hedonism and the crepuscular time scales Gilles Aiken exorcises. To call the music on Gaia ‘afterhours’ though might suggest it’s something for a yucky Ricardo Villalobos jaunt where sunglasses are worn throughout the night and into the day. Gaia does, however, align itself with the intricate Romanian minimal the Chilean and his [a:rpia:r] cohorts champion, but its originality comes through Kraut rock and free, avant garde classical influences with jangly, field recordings fit for a Tarantino western nestled into rhythms that for the best part are suitable strange.
Listen/buy vinyl 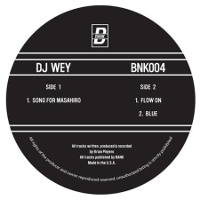 Two names in electronic abrasion making a racket at the moment is Primitive Language co-founder Nick Klein and distortion beat junkie Maoupa Mazzocchetti. Both artists have crossed paths on Berlin label Unknown Precept, with Entro Senestre’s BANK Records NYC plucking the two for a single-sided 7” following releases Bookworms and more Primitive Languages and Unknown Precept alumni, Cienfuegos. BANK007 though is all about the first track, a quick fire session of marching drums, sludgy basslines and funky, slime ball synths. This week BANK also released DJ Wey’s second record following a debut on Lover’s Rock in 2015, and Song For Masahiro skirts a lo-fi periphery between house and techno, with its title track a chilled highlight you’d imagine coming from the shores of Vancouver if Mood Hut and Pacific Rhythm are anything to go by. B-side options present broken beat, acid techno and UK electronica vibes, with “Flow On” merging a hail storm of percussion with twinkling keys and heavy claps.
Listen/buy vinyl 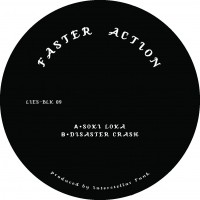 Given the rate LIES are currently operating at, the addition of Faster Action seems like an all-too appropriate name. Those who pay close attention to what’s happening on the ground in Amsterdam will recognise Faster Action from the grotty 12″ issued on the Rush Hour Store Jams series back in late 2014. At first an uncredited project, it was later revealed to be the studio chemistry of local Amsterdam producers Robert Bergman and Interstellar Funk. This 12” of “DJ Tools for the DJs” on the irregular LIES BLK series is seemingly a solo Interstellar Funk affair – perhaps Bergman was busy recording an imminent mixtape for The Trilogy Tapes – but the potency levels are still peaking around the maximum bludgeon-factor. “Soki Loka” is another Faster Action that blurs the lines between original track and edit, betraying clear references to EBM in the jagged Liasions Dangereuses-style bassline but surrounded by some truly dynamic modern production elements. Flip it over for an even-more relentless exercise in beating it down. Apparently these tracks were everywhere at Dekmantel Festival this past weekend, no wonder everyone has returned a bit worse for wear.
Listen/buy vinyl 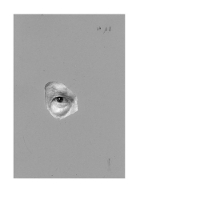 Die Orakel has become a label for the Juno Plus editorial which screams ‘news!’ each time we come across a new release. This year it launched its X-Files series with records coming from Orson Wells, Christopher Rau and man of the moment Pablo Mateo, however, it’s Roman Flügel who’s supplied Oliver Hafenbauer’s label with a first official release of 2016. Disjointed beats and shadowy bleeps which lurk in the dark of Die Orakel’s noir-ish aesthetic define this Verschiebung EP, and like Fabric’s recent Curiosity Model EP on meandyou., its analogue rhythms don’t quite incite the dance but they will make you move.  “Verschiebung 3” is this record’s most linear production, providing a strand of hidden functionality for DJs, while more discombobulated, experimental tracks can be found in the shorter “Verschiebung 4” and awkward, Bulcha-sounding “Verschiebung 2”. And for fans of Edward’s Desert Sky project, check out “Verschiebung 1”.
Listen/buy vinyl