Vakula – Cyclicality Between Procyon And Gomeisa 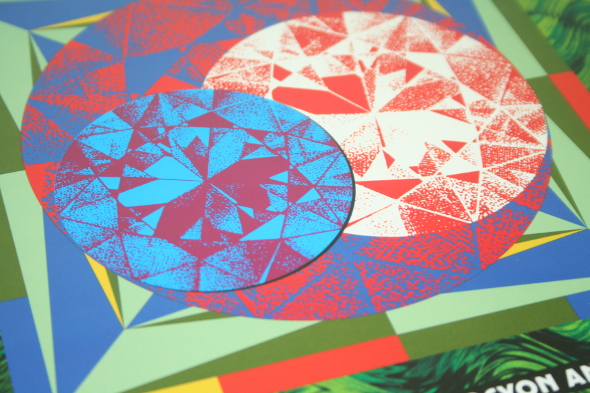 Ukrainian producer Vakula first touched-down with his 2008 Hohol E.P on Uzuri, incorporating rhythmic tribal textures with traditional club sounds. Since then he’s continued to develop a brand of house and techno framed within the warming, ephemeral comfort of experimental music. His first full-length album, You’ve Never been to Konotop (Selected Works 2009-2012), showcased some excellent wide-ranging oddities, with the subsequent album continuing to make ranges into interesting territory. What I’ve felt lacking from the previous albums is a consistent narrative, rather opting to present a collection of tracks that don’t necessarily add up to a complete whole. The same can be said for his most recent release on Dekmantel, Cyclicality between Procyon & Gomeisa, a record that fails to maintain any continuity but still demonstrates an inherent musicianship from a talented producer. 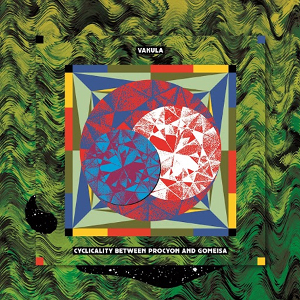 The title of the album makes reference to celestial bodies eternally rotating light years from Earth, a theme enforced by the operatic introduction of “Cyclicality Between Procyon & Gomeisa”. The guttural croaks of amphibious extraterrestrials force their way through sweeping, cosmic pads. Vast and volatile soundscapes swirl around an infectious main phrase that insistently conducts this cosmic symphony. This playful and ominous hook digs itself deeper into the psyche with every repetition, drawing parallels with similar compositions from Interstellar or Twin Peaks. In terms of an opening, this track is incredible, clearly projecting the listener into the darkness of space, sounds twisting together in the cyclical dance of distant stars.

Likewise, “Flying over Sirius” continues the natural theme of circling celestial objects. This is a brief inter-galactic rest stop giving weary travellers the chance to take a breath in an otherwise air-less environment. Equally, “Dim White Dwarf” ploughs the crusade into realms unknown with a throbbing, wet bassline undercutting malfunctioning alien hardware. These deep vibrations work around pads operating in zero gravity, carrying you off into unchartered regions of deep-space.

However, the well-executed ambient sentiment of the title track is immediately followed by the diametrically opposed sounds of “Acteon”. As a stand-alone piece of music this track holds its own; shaking highs and tinkling percussion builds rapidly into a free-form jazz workout. An improvised electronic exercise that stands up as a decent piece of music, but the huge leap from the epic space-journey preceding it was enough to leave me feeling disappointed. Likewise, “Takahashi E-180” didn’t leave much to be desired amongst the strength of the rest of the album. The harsh high-end gives way to a sporadic bassline, fluctuating from overwhelming frequencies to subtle, warm vibrations. This is one of the few unnecessary tracks that neither fit the over-riding space narrative nor work as the stand-alone compositions that compose the rest of the album

Vakula’s over-riding musicianship is clear though; the LP oftentimes spans the gap between empty space and more organic territory. “Overcoming Distance” is the first to bridge the space in-between, leading us into overwhelming fuzzy distortion with a gentle lead line plodding its way through unbroken warmth. Random noises seep through with apparent abandon, stringing the listener along until the fearless kick comes thundering forward. This is the first so-called ‘club cut’ of the album; sweeping pads whisking you away as plodding synth notes accompany an ever-present beat. This stands out as a typically ‘Vakula’ piece of music; slowly adding new elements to build the mood, gradually growing over eight or nine minutes rather than rapidly expanding over three or four. “Overcoming Distance” leads perfectly into the second half of the album, embracing a more more tangible form of electronic music akin to the subtle tones of jazz or blues.

“Gomeisa Blues” perfectly demonstrates this sentiment, the organic sounds and chest-shattering bassline melting around spatial pads that fade into the distance. Sporadic guitar work flashes in the foreground, laying the ground work for the epitome of a genuinely, down-trodden existence. The only missing element from this track is a sad and lonely singer, on the back foot of life, divulging the deeply troubled ins and outs of living a harsh reality. This marks another prominent departure from the implied narrative of the album’s title, but a no-less impressive interpretation of a touching genre. This is real, honest music performed from the heart.

A further example of warm, intuitive dance music is “8600KM Radius”. The jacking bassline and clanging stabs perfectly compliment the minimal rhythm, percussion raining down on the listener while soft, ghostly pads stress under the weight of an imperious groove. This is something to dig out for sunny mornings, something to set up your day free from hangovers or comedowns. Improvised piano hooks develop an already interesting progression, brandishing clear musicianship with deadly intent.

“Intergalactic Funk”, is exactly what it says – pure, unadulterated, funk. The arrangement, guitar licks and merciless bassline are all perfectly composed, even incorporating an authentic breakdown that blows most ‘80s equivalents out of the water. The sparkling key-work instantly takes the listener to the sun-bleached terraces of southern California. This is a genuine funk track, worthy of the Bar-Kays or Geraldine Hunt, clearly demonstrating Vakula’s deep understanding across a broad range of genres.

The album closes out with, “Sensei Revelation”, a quintessential production from the Ukrainian producer; deep, driving house snaking through undulating keys and deeply moving pads. Light and playful synth-work runs wildly over intermittent guitar hooks and an uncompromising bass drum. This is a perfect ender to a collection of excellent music, the combination of spacey pads, driving club rhythms and hypnotic tribal sounds are the culmination of an excellent L.P.

As mentioned, in terms of narrative, I couldn’t help but feel initially disappointed, but by putting my own prejudices aside the quality of the album is clear. Despite feeling like the curation could have been done better, this album does offer a good representation of the broad range from a talented producer. Some tracks come across as unnecessary and slightly self-interested, but the subtle progression from the emptiness of space to the authentic sounds of sad blues is a clear picture of Vakula’s talent. At its core, this is a collection of exploratory forays into the skills of one musician, but an album that provides the listener with 90 minutes of excellent music.