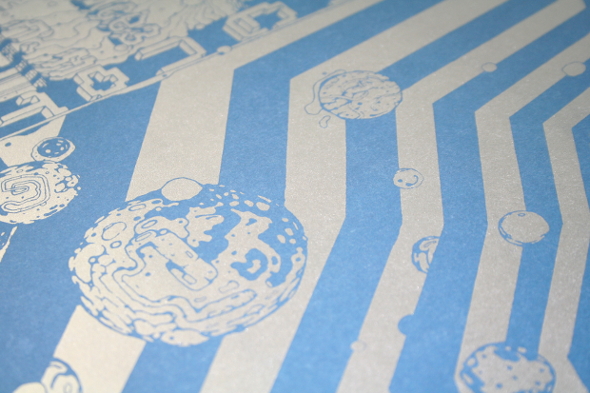 There’s something about the labels that come out of Glasgow. Diverse though they may be, the likes of Dixon Avenue Basement Jams, Tabernacle, All Caps, hell even Optimo and Numbers, are all bound together by a similar penchant for meaningful presentation and an assured conviction in the music they release. In other words, they’re all ‘proper’ labels, with an aesthetic you want to sign up to in a declaration of fandom, for no other reason than the fantastic job they make of being a label. 12th Isle comes along at a time when music from Scotland’s cultural capital garners respect like never before, and it immediately projects that same self-assured quality that makes you fill out another entry on your over-subscribed mental watch list for releases the label bosses haven’t even begun to imagine yet. 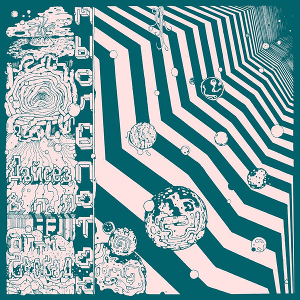 A large part of that instant allure is down to the artwork, and certainly this debut release from the event promoters turned music hawkers is a very fetching proposition indeed. It’s no shock to discover that the illustrator responsible is Al White, who was also found dressing up the Firecracker reissue of Lnrdcroy’s Much Less Normal and Yoshinori Hayashi’s The Forgetting Curve EP on Jinn. It’s the same detailed, retro-leaning comic book style that adorns the 12th Isle event posters, calling to mind the likes of Zeke Clough and appealing to every nerd who handled an early copy of 2000AD.

We’re not just here to talk about artwork though, and fortunately 12th Isle have the nous in the sonic department to back up their presentation. This first release is a strong statement of intent considering they may well have been able to reach out to one of their previous bookings such as Ramzi, Best Available Technology or some other such emerging/established figure with a whiff of buzz around them. Instead, they’ve turned to Dices and AEM Rhythm Cascade, who exist in a wonderful bubble of Russian electronics orbiting the excellent Udacha label. They’ve been spotted before, but only briefly, and this debut LP is a strong declaration of faith in the music they make. Who knows how the connection came about, but thankfully the label’s faith is more than justified.

There’s a sense of wonder that lingers throughout Thoughtstream, spelt out largely by the exuberant synths that sparkle, shimmer and ripple all over the 11 tracks. Interestingly, it doesn’t feel like an outright ambient album, for there are some slithers of house and other such rhythmically accented music to be found in the folds between the melodies, but this is most definitely an esoteric collection that teases at emotions rather than spelling them out. At times the mood darkens, such as on “Seine” with its obtuse layers of crackling electricity or the disorientating underwater swirl of “Pool”, but even in these moments the mood remains playful. “Square Fauna” meanwhile makes a wonderfully odd job of being jovial, throwing down a synth phrase at an odd angle that winds up in a groove fit for the Deepblak school of syncopation.

For the most part though, this is an album of heart-warming charms. “Pacific” is a perfect bluesy beatless lullaby, and “Green Diver” almost taps into the nostalgia-drenched field of none-more-British hauntology with its pealing leads beaming a signal back to the ‘70s. When a 4/4 kick is called for, the rest of the track builds around it with the same lack of concern for dancefloor conventions you would hope for from an Udacha record. “Like A Dream” could certainly serve as a fine warm-up track, and “Hologram” shuffles with the mystery of the finest curios to be found on Real Soon, but they’re hardly crafted to be crowd movers. “Caleidoscope”, with its pacey yet understated beat, is more like a minimal techno approximation of Geogaddi-era Boards of Canada rather than any current trend in dance music.

Therein lies the appeal of Thoughtstream, proudly doing its own thing, embracing the weird, and still coming off as a genuinely accessible, engaging listen. Relaxed in its demeanour and yet sporting depth, it’s a wonderful achievement for Dices and AEM Rhythm Cascade, and it gets 12th Isle off to a sterling start as another of those just-so-hot-right-now Glaswegian labels.