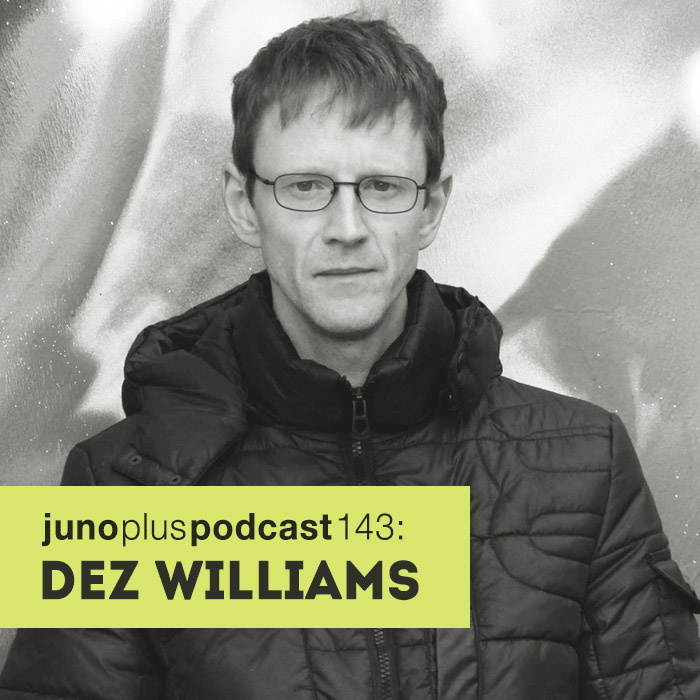 A hour’s worthy of funky and twisted electro from one of the genre’s most honourable devotees.

There’s something about electro that attracts artists who are happy operating outside of the limelight. For every Egyptian Loving theatrical performer there are legions of shadowy 808-coveting, MPC-baiting heads that remain betrothed to the underground, and in many cases they seem to actively avoid over-exposure. Take Dez Williams, one of Britain’s leading lights in the field of dark, dungeon-ready electro. The most famous exponents of such sounds hail from Detroit and The Hague, but here’s a man who has been flying the flag for crisp, sinister machine funk from the UK, where deviant electronic music has always found a natural home.

Williams first came to light through fabled platforms such as SCSI-AV and Ai, where experimental electronica and classically-informed electro would often co-exist in the same far flung corners away from the early 2000s booms of minimal, breaks and progressive house. Since then, there have been some notable turns on labels such as legendary Viennese institution Cheap, while in 2010 Williams launched his own Elektronik Religion imprint solely as a vehicle for his own productions.

In recent times the recognition has been coming in from labels more visibly tuned in to the cut and thrust of contemporary electronics, with releases on Bedouin, Shipwrec and New Flesh all pointing to the fact that perhaps there is indeed a wider audience for uncompromising, proudly underground electro these days. Not that such interest has changed Williams’ own approach, as you will hear in this roaring romp of a podcast he has put together for us of what we’re told is mostly his own material.

Many thanks for doing this mix for us, it’s quite bracing. Would you say it’s fairly indicative of a DJ set from you in the club?

To be honest it’s not very often I get asked to DJ at events these days, I’m usually asked to play live. Which, either way, I play sets of all my own material consisting mainly of unreleased stuff I’ve been making prior to the booking. I like to keep things fresh and experiment with new ideas and sounds. I always try to keep things varied with elements of electro, acid, house, techno and beyond.

Where and how was it recorded?

This was recorded at home using a Vestax VCI-300 controller and Serato software. I’m usually a Technics and vinyl person, but was awaiting on a new set of styluses before I recorded this mix.

Is there any method in how you decide which of your productions will see release through Electronik Religion and those that you sign off to other labels?

Well I make music on a daily basis, in many styles. Choosing what to send to other labels is always a bit of nightmare for me unless I know they are looking for one particular style. I’m known for over doing my demos a bit (sending way too many tracks!), but I like to have a bit of variation in a release and I’d get bored if all I ever created were electro or acid tracks.

The Elektronik Religion digital label was just set up as a personal thing for me to get rid of some of my overflow of productions. I have no plans to release anything by another artist on the label as I would not have the time or funds needed to push their music, which I think is an important thing for the artist to have.

What was it that first attracted you to working with the electro form? What were your inspirations?

Well I grew up in the ’80s, so I was totally blown away as a kid by the whole breakdance scene. So that introduced me to early electro in the form of Cybertron, Man Parrish, Kraftwerk etc. I was lucky enough to have great parents who kindly bought me a Commodore C64 when was I around six years old. I started playing around with early sequencer software, which always had such cool 8bit drums which sounded like the electronic music I was hearing growing up at that time. Also I watched a lot of Horror and sci-fi movies when I was younger which has always inspired my darker/spacey sounds I guess…

You’ve become quite involved in Killekill of late, are you looking forward to participating at their upcoming edition of Krake?

Yes I’m really looking forward to playing at this years Krake Festival, and very honoured to amongst such an amazing line up of artists. And the Killekill family are really cool people. It’s going to be a very special event for sure!

Griessmuehle is such a wonderful venue for these sort of events isn’t it?

Yes I played there once before at an electro night called Mechatronica, and the venue is really nice with a friendly crowd that love the music! Looking forward to playing some of my new creations there again.

How do you feel about electro as a genre in 2016, would you say it’s more popular than it was a few years ago?

Well I remember back in early 2000 when DJs that played Electro were usually put on first to warm up, or shoved into the back room while the techno guys had the pleasure of main room duties. But over the years it seems more and more electro is being played in the main room and at peak times, which shows how it’s being accepted and enjoyed more now. And let’s be honest in most cases it’s just drum patterns that separate the genres really!

Who’s doing good things for electro and the moment, old or new school?

Well there are so many great artists making electro right now and some truly amazing labels. On top of this, some of the world’s best DJs are playing and supporting the Electro scene… And I must give a nod here to Dave Clarke for his consistent support over the years… One of the guys at the top who truly understands what it’s all about. NO end of RESPECT for that man!

How often do you productions stray outside of the electro framework?

I make music everyday, for me it’s a personal release of emotion. Making music has always been my equivalent of writing a diary. So some days I can make ambient, chilled out soundtracks.. Then the next day it could be 140bpm club bangers or some drum and bass… depending on my mood. Variety is the spice of life! I was ‘pigeon holed’ as an electro producer from my first vinyl releases I think, but hopefully now people that follow my music know that I’m not a ‘one trick pony’.

Remixes don’t seem to play a major role in your productions, is there specific reason?

I’m not often asked to remix other producers. I have done remixes in the past, but only a handful. (Hardfloor, Pip Williams, Darkmode, Squaric, etc) I do quite enjoy having a go at remixing though, and have made a couple of ‘unofficial’ things for my own pleasure.

Anything else on the horizon for 2016 – and should we expect another Dez Williams full length soon, it’s been a while.

Well so far 2016 has certainly seen things picking up quite a bit for me with regards to bookings, owing a lot to the great team at Killekill. So looking forward to hopefully more gigs, as well as more new music being released! I have EPs due out soon on a new Killekill sub-label and my second release for Sunil Sharpe’s Earwiggle label due in next couple of months. With another handful of projects for some other labels also coming soon. I’ve been working very hard over many years, so it’s really nice to now finally start seeing some rewards coming back. I always feel so truly honoured by it all and very happy that other people from all over the world are enjoying what I create. And with that I’d like to thank you for inviting me to be part of your Juno Plus Podcast series!