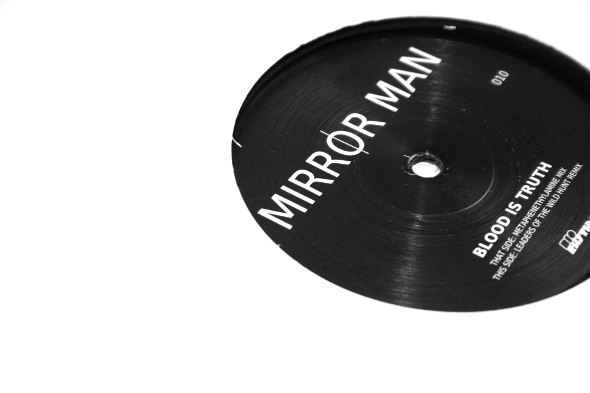 Paul Du Lac’s Bio Rhythm label has shone over the past year thanks to a willingness to support some unusual projects and a genuine desire to push electronic music forward. First there were Mick Wills’ edits of the new beat act A Thunder Orchestra’s “Shall I Do It?” , followed by Wills and Du Lac’s edits of Italo trio Three of You. Then Bio Rhythm released Deviere’s Beyond The Celestial Gate, which featured some of the most unusual interpretations of deep house and techno heard in recent times. That DeViere 12″ neglected that sound’s studied expertise in favour of a freeform, lo-fi approach which feels refreshingly different. Now the label is issuing Blood Is Truth from the unheralded Mirror Man. There’s no information about who is behind the project, but it has already been championed by Helena Hauff, I-f and Intergalactic Gary – and it’s not hard to see why.

On the ‘Leaders of the Wild Hunt’ version, a gut-wrenchingly dense EBM bass spews out over tight percussion and drums. Against this backdrop, a saw-tooth synth gnaws away repetitively. It’s exactly the kind of punishing track that would appear in one of Hauff’s sets. By contrast, the ‘Metaphenethylamine’ mix is more understated. It relies on a similar type of backing track, with strict claps and drums prevailing, but this version puts a focus on a cold synth riff that shines like a lone star in the dark night.

That’s not to suggest that this version lacks the requisite force, and a pile-driving bass simmers beneath the surface before finally making its way to the surface at the climax. If you are looking for a snapshot of where modern house, electro and techno is heading, or want to explore the bizarre, brilliant eco-systems that are flourishing in the grey areas between these pillars, then put Bio Rhythm at the top of your hit list.