David Vunk has impressive form when it comes to discovering new music. The Dutch DJ’s Moustache label has championed artists like Ali Renault and The Problems, while the sub-label, Moustache Techno was one of the first platforms Gesloten Cirkel’s music appeared on. Now the garrulous label owner again casts his gaze wide for this split release, Moustache X. 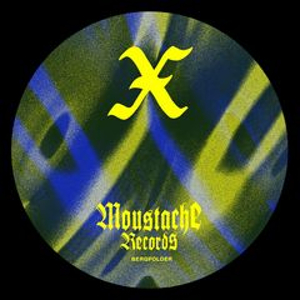 Close to home, Vunk has sourced a contribution from Dutch DJ /producer Endfest, the founder of the Arctic Boogie crew. “Seutek Boogie Boy” is a typical West Coast-style electro workout – rattling, steely 808s provide the backdrop against which Endfest daubs acid pulses while eerie synths swoosh menacingly. At the other end of the spectrum, there’s D’Evoee’s “Need U”. It sounds like it was made during the early ‘90s and its intro is similar to the start of Moby’s “Go”. The track’s synths have that soft-focus, hypnosis-inducing feeling that was a central part of trance-techno from that period and the presence of a ponderous male vocal only adds to the sense that it belongs to or is heavily influenced by music from that time.

The other contributions come from Vunk’s label-owning peers. Alessandro Adriani was until recently best known for running the Mannequin label, but a recent artist album and now “Death Move” put him in the spotlight and deservedly so. “Death Move” is a sludgy mass of noise and static interference shot through with insistent pulses and supported by a lo-fi jacking track. Closing the release is Antoni Maiovvi’s remix of Unit Black Flight’s “Shortwave Radio Antenna Down”. This track originally appeared on the remixer’s own Giallo Disco label a few years ago and original copies now trade for high sums. In Maiovvi’s hands, this strange, paranoid track is turned into a pulsing electronic disco groove anchored in tough industrial drums. It brings an end to a release that consolidates Vunk’s reputation for sourcing underground music.