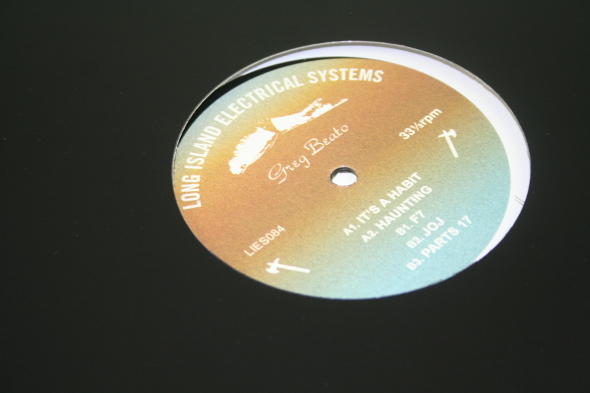 Over the years we’ve seen a number of L.I.ES releases tell a story; tracks carefully selected and curated in order to build a narrative. Records like KWC 92’s Dreams Of The Walled City or Marcos Cabral’s False Memories, both wildly different releases that tell their own particular tale. Greg Beato’s latest outing is no different, five tracks of deep and ominous techno that burn dark and twisted images into the imagination. Primarily releasing on Apron records, Beato previously put out PMA on L.I.E.S. back in 2013. This was one of four records that year which brought Beato’s deeply emotive and pounding techno to the fore. 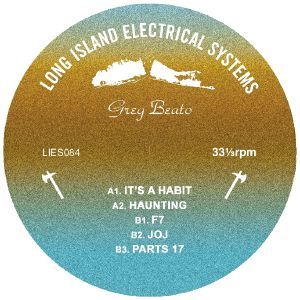 This latest release from the Miami-based producer feels like a natural evolution of this sound, taking the listener into even darker territory. “It’s A Habit” kicks things off with a beautiful polyphonic synth line running tightly around the kick; the bassline completing the final push into both hard and dreamy territory. A wide-open ride cymbal takes the rhythm up another notch, gently crashing over evolving keys while a collection of closed hats snake themselves around its rhythm. An excellent introduction to a twisted tale that gently nudges you into the shadows; the relentless, hammering drums and dreamy notes all building into a delightfully dark symbiosis.

The A-side closes out with ‘Haunting’, featuring ghostly pads and a beat which quickly introduces sharp claps and a throbbing bassline. The spectral moans of forgotten voices intersperse the shuffling rhythm while gloom and ghostly moans emanate from within Beato’s machines. “Haunting” is a great example of Greg Beato’s ability to construct perfect form from minimal components; the seemingly simple beat, deep bassline and hellish wails all holding the listeners interest throughout the track. A gentle synth line and electro pattern lead us into a short break, giving a few moments of respite before being dropped back into a realm of murderous, sonic intent.

The B-side opens with “F7’”, the drums beating out a slavish rhythm while erratic percussion throws you off balance. The track transports you to a hellish workhouse where demonic hands are continually burnt from torturing dead souls. The industrial grinding of the machine breaks down into huge, metallic stabs reminiscent of Kosmic Messenger or any number of old techno releases on Plus 8. Beato’s individuality is clear though, the kick riding underneath a crashing mixture of percussion, at points giving only a brief break from the hypnotic synth stabs. Rumbling, thunderous drums drive everything forward, toms cracking in the background, the ominous weight of throbbing sub-bass only perceptible in the short break. Maybe a hard listen for some, but behind the relentless push and pull of chaotic sounds lies beautiful, soulful techno music.

The final two tracks on the EP provide a contrast to the rest of the record, maintaining a box-jam aesthetic. The parts all flow organically with one another, breaking down, building up and dropping themselves back in. “JOJ” utilises glowing pads and a stripped beat to build the tension before a killer acid line takes over the rhythm. A short box jam that packs a big punch. “Parts 17” brings us briefly back to the ethereal realm with a stuttering synth line stumbling across weighty drums. Again, the parts all warp around one another, hi frequencies piercing through the dark as the low-end movements drift in and out of focus. The final two tracks seem slightly unnecessary in terms of the narrative drawn out by the other three, but are a welcome addition to a fantastic record nonetheless.