DFA, Where To Now?, Major Problems, R&S Records and City Slang make the grade for this edition.

This latest column commences with further praise for the Machine Woman 12″ on Where To Now? The label co-founder James Hines has featured several times previously for his visual contributions under the name Studio of the Immaculate Heart, cultivating a clean and consistent aesthetic resulting in some sharp-looking artwork. The Genau House 12″ proved design doesn’t need to complicated, taking clear inspiration from that iconic poster for a 1975 exhibition of works by Andre, Flavin, Judd and Lewitt at Oxford’s Modern Art Museum. However, there is also some playful reference to the record’s title here with the four square’s representing both house music’s rhythmic foundations and the two-up, two-down terminology applied for terraced housing in the UK. Very smart!

Dublin’s Major Problems got high praise last month for Simon Landrein’s cartoon strip-style contributions to their Compassion Crew compilation and the label’s latest release is deserving of mention too. A simpler design approach is naturally taken with the Lumigraph 12″ Bulletproof Holiday, honing in on a singular screen-printed image that is quite distinctive on a reverse board sleeve that is satisftyingly thick. The debossed Major Problems logo on the inner sleeve is a nice touch too. Bulletproof Holiday is made extra special thanks to the limited edition 12″ featuring a 32-page colour photobook featuring pictures taken by Lumigraph himself. 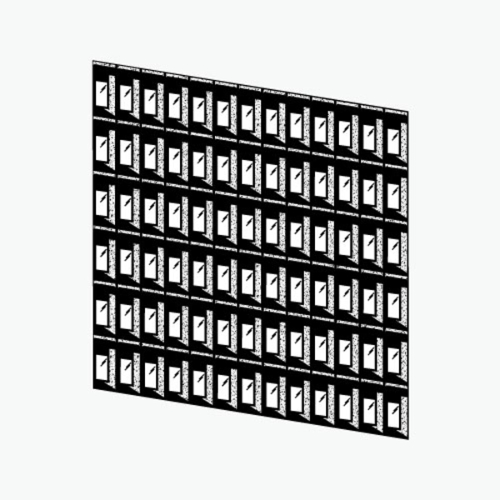 Further simplistic sleeve work for May came with the surprise return of Factory Floor and their Dial Me In 12″ for the evergreen DFA Records. Now a duo of Nik Void and Gabe Gurnsey, the band’s ongoing relationship with the New York label has resulted in some vivid record sleeves so far and Dial Me In is no different. Jack Sachs is the individual responsible for the artwork, veering away from the strange and bizarre 3D animation that the London-based illustrator has in his sizeable and impressive portfolio in favour of a simple design that leads the eye a merry dance indeed.

Recent artwork from Berceuse Heroiques suggests founder ‘Gizmo’ grew up immersed in the comic book world of 2000 AD et al; last year’s Serpents Promise 12″ by PMM featuring insert based on artwork from Britist comic illustrator Simon Bisley. The DJ Overdose 12″, Dead City, featured more art from Bisley, specifically a strip from his work on the ABC Warriors series – the glistening metal clawed fist that greets your gaze when you pick up the 12″ is likely to tap into the teenage comic book lover in anyone

The latest Lone album, Levitate, saw Matt Cutler continue to work with Konx-Om-Pax’s Tom Scholefield on art direction which lends a degree of visual consistency to all of this albums to date for R&S. What made Levitate extra special in a visual sense to these eyes however was the front cover photography from LA-based artist Andrew George; a hazy indecipherable yet welcoming image that ties into the dreamy sounds of Lone’s music. As R&S state, Cutler was inspired to make this new album whilst cruising through the baking heat of LA listening to old jungle and hardcore – electing to use this particular photograph from George makes perfect sense.

Similarly, the artwork for Gold Panda’s latest album, Good Luck And Do Your Best, is based around photography directly tied to the music within. The story goes Derwin Schlecker travelled to Japan in 2014 with photographer Laura Lewis with the intention of creating a “sight and sound documentary” made up of field recordings and pictures. Instead he was inspired to make a new album, yet Lewis’ visual documenting of their time in Japan wasn’t abandoned, but instead implemented as part of the artwork via Dan Tombs’s design. For further reading on the visual aspect of this album, check an interview with Lewis and Tombs over at Creative Commission.

All selections and words by Tony Poland