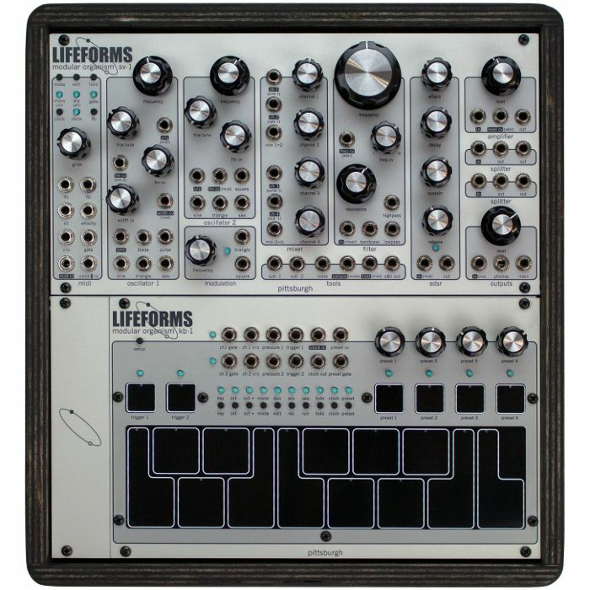 As the culture surrounding modular synths continues to grow and assume a more central role in the development of today’s electronic music, manufacturers follow suit by designing products that appeal to a larger clientele that might be intrigued by the possibilities offered by these systems. Attempts at stepping out of the often esoteric realm of hardcore module assembly into more common territory will often take the shape of semi-modular synthesisers; a cohesive unit (an instrument) constituted by a number of different modules by the same manufacturer and assembled together while still preserving all their connectivity possibilities.

The new Pittsburgh Modular Lifeforms 201, however, takes the concept of semi-modulars a step further by presenting us with an all-in-one system comprised of two main boxes that are themselves semi-modular units. The Pittsburgh Modular SV-1 and KB-1 modules are installed into a portable Eurorack frame that can be used both as a standalone instrument and as part of a larger system. The two modules, KB-1 and SV-1, together form the basic architecture of a traditional analogue synthesiser and includes oscillators, mixer, filter, sequencer and a touch-sensitive mini-keyboard.

The KB-1 works something like a pulse-emitting machine, so to speak. It combines the keyboard section with the sequencer and a few other features concerned with the Midi and CV/Gate signals, and it is from there you trigger the other semi-modular, the SV-1, to produce sound. It is important to remember, however, that while both modules are assembled into one same box they do not share any internal circuitry between them. This means in order to make it sing, my ‘test drive’ began by patching away.

The first sounds made themselves heard after connecting the KB-1 into one of the oscillators via voltage control (v/o) and sending some gate into the envelope (ADSR). By holding a few notes on the touch-sensitive keyboard and pushing the small “arp” button, I very easily created a simple arpeggio that freed my hands to continue patching, connecting the second oscillator – an independent oscillator- creating modulations on the filter with pulses coming from the LFO section, etc (In this case the 201 system actually has 2 sub-oscillators – one for each master oscillator – and you can mix all these signals together in the 4 channel mixer integrated in the SV-1 module.) Soon enough I was totally immersed in the 201 system, mesmerised by the dramatic changes in the sound, effected by the frequency modulation knob on the oscillator. 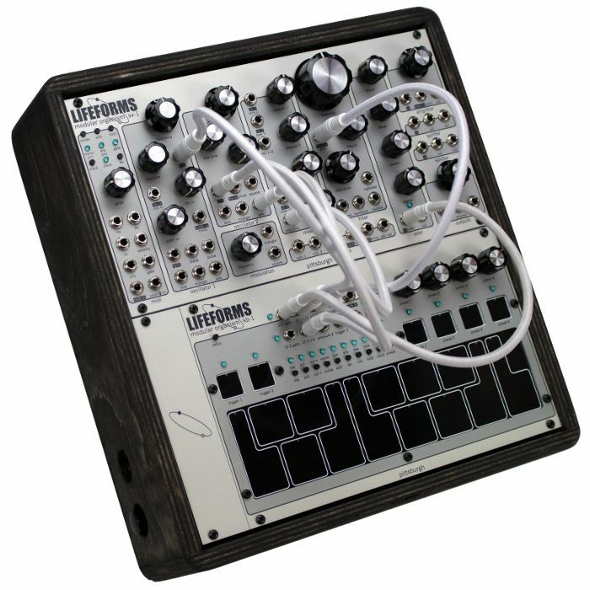 During my test, the variety of sounds varied vastly and never seemed to repeat themselves. From the initial, monotonic throb of the first arpeggio to an organic, ever-changing mass of electronic noise that sounded like the opening track to Oneohtrix Point Never’s album Returnal, I couldn’t let go of changing patching and turning knobs. The sound felt magnetic and great even just as I played around with basic waveforms, such a simple saw sound or a sine wave. It all sounds clear, present, sharp and powerful – not powerful in a filthy Minibrute kind of way but more in a clear-but-warm incisiveness of a Moog, perhaps. The bass feels full but spectral; warm but cutting.

Along with two oscillators, the SV-1 features LFO, modulation, filter, amplifier, envelope, sub-oscillator and modulation – and all of them inter-connectable through patching, overriding its internal circuitry. The filter is great to play with, generating beautifully squelchy but clear screams, with great definition and without being too overpowering on the resonance; I love the way how the cut-off knob was prioritised in size, becoming a very central part of the whole synth – which, of course, as any producer tinkering with hardware will tell you, it is.

Given the very basic design of the filter, the Frequency Voltage Control serves as a sort of envelope for the filter cut-off. This allows us to better shape transients when filtering the high frequencies – useful for extra squelchy sequences. The integrated mixer is simple but generous, considering that it contains volume controls for the two main oscillators plus two sub-oscillators to boot. All this added to full connectivity in the audio signal, vastly multiplying its possibilities.

Overall, the Pittsburgh Lifeforms System 102 is an amazing tool for sound experimentation, allowing the user to get properly immersed in all its possibilities and going very deep in terms of generating unique and interesting sounds. You can go for hours on end just morphing between different, entirely bonkers sonic events without it ever repeating itself, or you tiring of it. The modular aspect of it, with all the possible connections between the various components in the modules is fully realised and render the options endless, but you still have a reliable, fully analogue internal circuitry ready to go once you feed MIDI or CV/Gate into the SV-1. By covering these basic needs, the System 201 works amazingly well as both a painless first step into the world of modular synths and an uncompromised part in a more complex setup.