The first PLAYdifferently mixer is unveiled 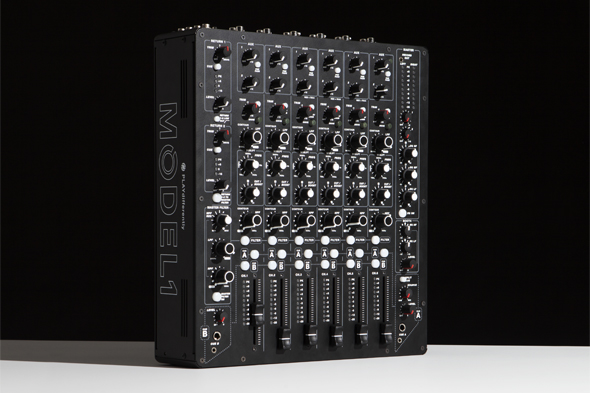 Richie Hawtin and Andy Rigby-Jones have been working together on the MODEL1.

There have been plenty of attempts at redefining the DJ mixer, from incorporating effects through to digital hybrid technology, but in essence there’s only so many ways you can dress up a set of faders and EQ controls, right? Richie Hawtin has always taken an active role in engaging with music technology, whether in his own performances or in the way his audience connects with what he’s up to on stage. Andy Rigby-Jones meanwhile is a highly regarded force in the world of DJ mixer design, having worked with Allen & Heath since the ‘90s. Word has been bubbling away for some time about a new project coming from the pair under the PLAYdifferently banner, and now the details of their collaboration have come to light.

As Create Digital Music report, the Model1 certainly has some intriguing tricks up its sleeve. As you would expect where Rigby-Jones and the Allen & Heath legacy is concerned, a lot of importance is seemingly placed on the build quality, with full analogue circuitry throughout the six-channel mixer. There are two sets of stereo sends and returns, and three phono preamps. The real hook in this particular mixer is that channel EQs have been done away with in favour of separate low and high pass filters, with the ability to ‘sculpt’ at the frequency range as well. These controls are aimed at going deep on the creative process of blending tracks together, zeroing in on key elements and cutting out unwanted noise in the mix.

There is still a three band EQ on the master channel though, which can be assigned to any specific channel if you desire a more traditional approach. There is also an in-built drive function for each channel so you can start to change how aggressive the sound is in the mix, before the fader in the signal chain so you’re not running the risk of blowing the system. There are also dual headphone cue points for collaborative mixing, and a whole host of connectivity round the back.

For more technical details head to the PLAYdifferently website, and be prepared to save some money as they’re expected to retail at around £2500 before tax.