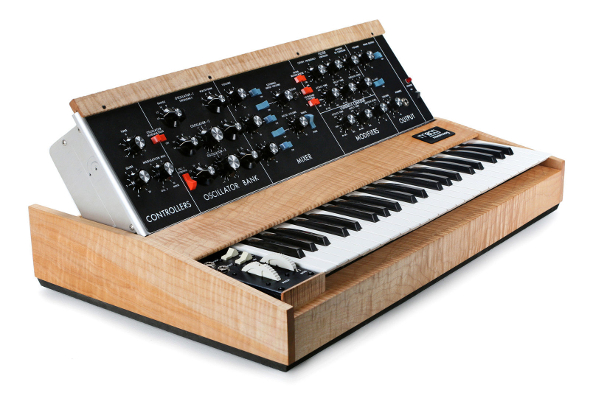 The famed synthesiser manufacturer brings its 1971 best seller back to the shelves.

The Minimoog, historically, is considered the very first synthesizer for ‘musicians’ that was made available to the general public. Released in 1971, the three oscillator, monophonic Minimoog has stood the test of time thanks to its trusted analogue sound and famous filters, with Moog revealing they will bring the Model D back to life in what they’ve described as the most authentic recreation they’re are able to make. Moog have been known to reissue previous inventions before, like its limited run of its classic System 55, System 35 and Model 15 modular synthesizers (including an iOS version of the Model 15) in addition to other plans for the mammoth Emerson Modular system originally made in 1969.

Few changes have been made to Moog’s new Model D reissue, to be unveiled at Moogfest 2016 in North Carolina this weekend, but users will be pleased to know the new update comes equipped with CV out and MIDI capabilities. As this update is based on the old design, MIDI CC for knobs and patches have been left out, with Ask.Audio suggesting the new Model D will retail for around $3500 US. While an official release is yet to be decided, you can get a better idea of what makes the Minimoog Model D tick by watching the YouTube video below.