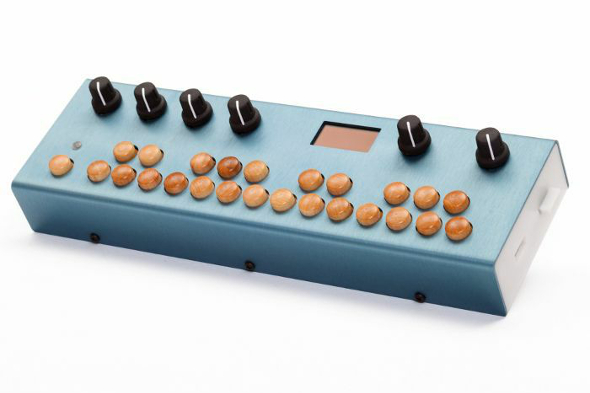 Critter & Guitari is an American manufacturer focusing on simple, beautifully designed and easy-to-use musical instruments with the road in mind. The company was started by Owen Osborn and Chris Kucinski who have turned a shared obsession with technology, materials and design into the perfect reason to start creating these machines shortly after they met in school. Their latest endeavour, the Organelle, is a small-sized machine that gathers the functionalities of a drum-machine, a sampler and a synthesiser all into one elegantly designed box.

On first look the Organelle shares some of its obvious features with previous models such as the Septavox; components appear very simple, replaceable and sturdy while at the same time oozing a sharp aesthetic. The keyboard on both the Organelle and the Septavox are made of small, rounded wood beads and, although it works really well, they could potentially worry musicians accustomed to more orthodox interfaces. In the context of the Critter & Guitari instruments, though, it truly adds to the playful appeal of it all.

Its small size, the fact it comes with a built-in speaker and has an option to run on batteries suggests that portability was a central concern in the design of the Organelle. It’s very hands-on and has great potential for more spontaneous, on-the-go experiments in unpredictable contexts outside of the studio. Factory sounds vary from analogue-sounding bass to weird vox arps in addition to sample banks, drum sounds, weird sound effects and more.

Organelle patches are stored in a small USB drive that can be found in the side of the instrument. This drive can be plugged in to a computer and new patches can be loaded into it, or furthermore, they can be created and modified using a software program called Pure Data. There’s a growing list of patches online and the possibilities are naturally endless. They can also be edited or created in the device itself. 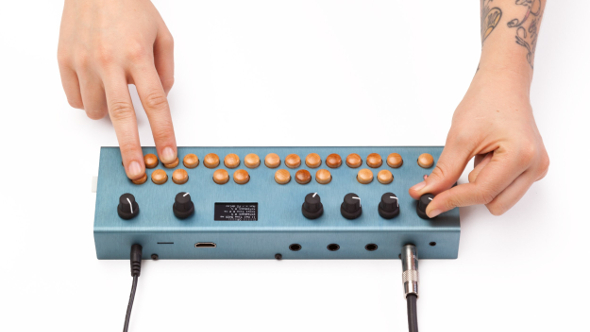 New patches can be found at the label’s website where you can listen to previews and download the zips of your choice. These can then be unzipped, placed in the USB drive and loaded into the Organelle with ease. I went with a patch called “Waterdown”, adding descending scales to a note when played on the keyboard. The Organelle also comes with apeggio mode, a sampler and the possibility of integrating an external sound source for processing. As soon as I plugged the Organelle into my computer and start to mess around with the parameters I found the arp interplay sounds surprisingly like a Jeff Mills bleep sequence.

In sampler mode I was able to simply plug a sound source into the audio input and press the aux button to record. It’s that easy. All sorts of arpeggiated patterns and fun sequences can be created this way and I sampled a tom drum from my own library. By using the arpeggiator I was able to turn something out that reminded me of a Sun Ra Disco 3000 atonal percussive pattern – very satisfying.

When adding effects like the quad-delay, for example, I was able to turn my source audio into a beautiful pulp of endless spatiality; the house track I used to run sound through was totally decimated into a repetitive sonic sludge that sounded cool to say the least. It’s great how even without using any effects the input itself transforms the sound into something a bit more lo-fi and warm with hearty character. The Organelle is vibrant and fun with a great look and sounds to match. With great hacking possibilities it really lends itself to experimentation and playfulness – two essential elements of musical creation.
More info/buy