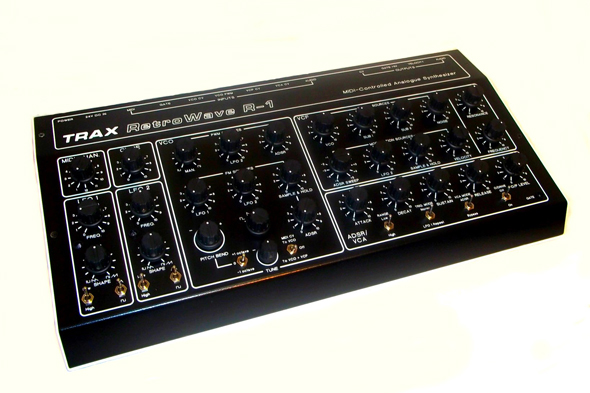 The model train electronics manufacturer returns to the world of analogue synthesis.

With outboard hardware stepping out of the dedicated studio space and ever more into the bedrooms and box rooms of would-be noisemakers, space becomes an ever more vital premium. As such, the advent of the desktop synthesizer has been a welcome addition in the options available to the modern musician. There are some clear front-runners in this regard, not least the hugely popular Vermona Lancet monosyth and the Waldorf Blofeld, all keyboard-less and condensed into diminutive cases to free up that surface area real estate.

Trax Controls are not exactly a household name in the audio market, as their primary focus since the 1990s has been on analogue modules for train sets, adding anything from diesel engine chug to steam-puffing whistles to your model railway experience. Richard Rix has taken his decades of experience in the audio field and applied them to creating the RetroWave R-1. It’s a monosynth brimming with all the features you would expect from a desktop unit, with all the parameters laid out on the surface interface for easy access. The synth features a voltage-controlled oscillator with a wealth of different waveforms available, a four pole filter, two LFOs, sample and hold, white noise generation, an ADSR envelope and a voltage controlled amplifier. Crucially for the contemporary compact studio dabbler, the RetroWave has a built in MIDI to CV unit so it can be controlled by a computer or MIDI sequencer.

While the original model of the RetroWave R-1 was made available in 2013, now Rix has responded to feedback from the field to deliver some improved updates on a new model, available for pre-order and set to ship in late April. As well as a sturdier steel case, the tuning knob has been given a centre ‘dead zone’ to make manual pitch bends less hazardous. Germanium diodes have been added to the overdrive stage for a softer kind of distortion, while the output stage has been improved to reduce crosstalk between waveforms. A ‘dead zone’ has also been added to the filter envelope modulation control.

You can take a look at the full list of features and hear sample sounds over at the Trax Control website, where pre-orders on the new model are being taken for a late April delivery. The RetroWave R-1 is retailing at £325.