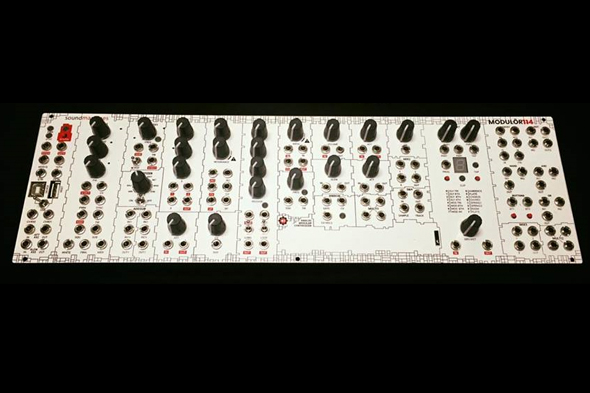 The single frame Eurorack synthesiser is designed to be an entry-level introduction to modular.

The world of modular synthesis continues to gain traction and look for ways to draw in further hapless gear heads. It seems that many manufacturers are looking to all-in-one starter solutions that can get new users making sounds and patching like mad straight away, without the months and years of trial and error to get a simple rig working. Just last week the highly sought after Bugbrand announced the Synth Voice, a one frame unit that harks back to the lauded modular work Tom Bugs was carrying out some years back, although naturally that first batch has already sold out. Elsewhere the likes of Roland presented the System-1m, fully Eurorack and computer compatible while also working as a standalone unit.

As Synthtopia reports, Italian developer Davide Mancini, the head of Soundmachines, has unveiled his own one frame starter pack for the modular-curious. The contents of the MODULÖR114 are varied, and provide a lot of potential through USB connectivity. There are two voltage-controlled oscillators (one of which can be used as an LFO) with the potential to add another digital waveform into the mix from the computer linked interface. There is a mixer with three inputs, filters, a loopable envelope, a ribbon controller, a 24 bit effects module with chorus, reverb and delay and a digital section featuring clock dividers and logic gates.

Interestingly this unit can be powered by a USB cable, an independent 12V power supply, or of course a Eurorack ribbon as part of a larger set up. There is also reportedly a hidden monosynth you can engage by pressing the SYNTH button, which automatically patches all red labeled jacks together in a classic monosynth signal flow. The unit is expected to hit the streets in June, with pre-order information available at the Soundmachines site. Meanwhile watch Mancini demonstrating and talking about his creation live at Superbooth 16 below.