The Belong and Telefon Tel Aviv members have a new project ready to air on Spectrum Spools.

Like the naughty cousin to Editions Mego’s austere veneer, Spectrum Spools has done a fine job of establishing its own lively identity in the world of avant garde computer music, seeming like much more than a mere sublabel now. Already this year Yves De Mey’s Drawn With Shadow Pens album has graced our ears, not to mention the recent salvo of LPs from Container, Anna Caragnano & Donato Dozzy and David Borden, and scores more big hitters besides. While they may not have graced the label before, Turk Dietrich and Joshua Eustis come from respective lineages that hover around what Spectrum Spools is all about. Both hailing from New Orleans, Dietrich is a member of Kranky-approved drone outfit Belong while Eustis found notoriety with his role in Telefon Tel Aviv throughout the ‘00s.

Now the Louisiana duo have teamed up to form Second Woman, making their debut appearance with a double LP on Spectrum Spools that charts exciting new territory for both artists. The glitch qualities of Telefon Tel Aviv can be heard clearly on the self-titled album, albeit in a more icy context that suits the intensive digital signal processing going on throughout. As the label would have it, “Second Woman is a nonpareil debut of futuristic electronic music fusing the coveted genetics of the duos respective previous endeavors into an alluring new enigma of ASMR-inducing kaleidoscopic dub.” See if you can achieve your own autonomous sensory meridian response by way of the track “700358bc5”, streamable via the SoundCloud player below. Also keep an eye out for the new album “Ghost Detergent” by Prostitutes, due out on Spectrum Spools in the late Spring. 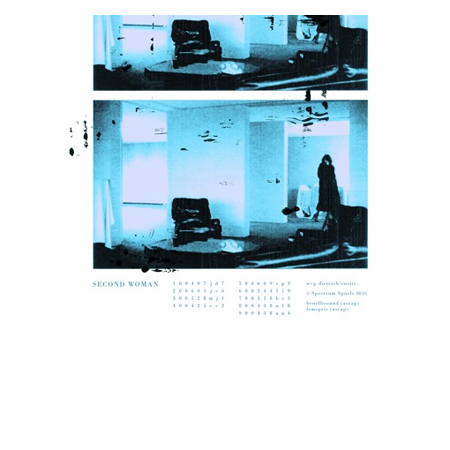