DJ Slyngshot – Ain’t Got No Time

Yappin Records boss DJ Slyngshot may be successfully keeping his identity a secret, but he can’t stop his reputation from growing. So far the German producer has built his name the old fashioned way, issuing quality tapes and records from his pointedly garish website until people began to sit up and take notice. The sound he pushes is a set of familiar influences arranged in an unusual way. Slyngshot chops up jazzy melodies hip hop style, setting them over blown-out house rhythms and seasoning with a healthy dose of turntablist effects. As a blueprint it could go either way but he’s pulled it off with style so far, crafting a hybrid of hip hop and lo fi house that sounds genuinely fresh. 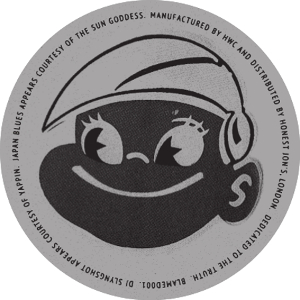 Now Slyngshot has been tempted away from Yappin for the first time for the debut release on new label Place No Blame, helmed by Pietro BH of NTS radio show Reverie. A-side “Ain’t Got No Time” is the biggest draw of the 12”, building over a clipped, soulful sample like Andrés in gangster mode and scratching a hip hop vocal playfully over the top. Though Slyngshot’s approach to collage is decidedly rough around the edges, the busy drum work keeps it engaging, trading loose claps for haywire hi-hats over a brazenly simple bassline. It’s a cut-and-paste affair, but Slyngshot has a keen ear for identifying two-bar loops that hold strong over eight minutes of repetition.

The other original track here is a much looser jam. “OTown” lets a bleary synth line stumble over a field of jittery drum work, its muffled kick disappearing and doubling back as if it doesn’t quite know where it’s going. There’s a charm to its hazy groove, particularly as the melody develops across the second half, but it lacks the colour and attitude of the title track. Place No Blame have recruited Honest Jon’s resident expert of all things Japanese, Howard Williams, to remix both tracks, fresh from a classy series of edits for Berceuse Heroique as Japan Blues. He’s not precious about his source material, tearing the guts out of the originals and remoulding them as gritty club tracks.

He homes in on the low-end of “Ain’t Got No Time”, adding a clanking, pots-and-pans drum pattern and a corrosive bassline that rips through Slyngshot’s twinkling synth loop. For his aptly-titled ‘remangle’ of “OTown”, Williams introduce another set of kitchenware percussion (this time, the cupboard with the glasses) and a rude bassline that grinds the song to a dramatic standstill halfway through. The original tracks are strong, if not quite up to the standard of DJ Slyngshot’s 12” releases last year, but the canny choice of Japan Blues to remix is an easy win, making for a promising first release for Place No Blame.