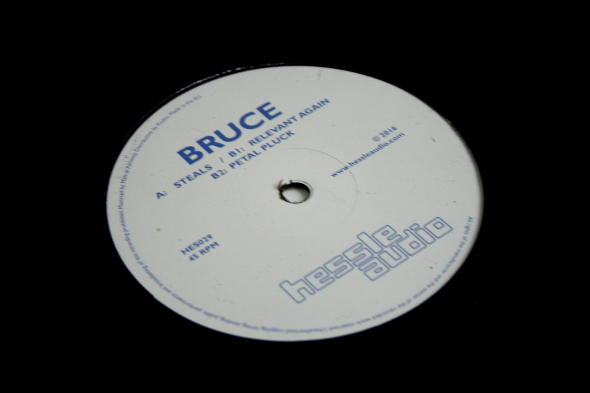 Bruce is the second in a short line of mononymous Hessle Audio artists named like Brazilian footballers. Like Joe before him, Bruce constructs texturally broad, off-kilter beats that are intriguing and banging in equal measure. His assured debut release of driving percussion and malfunctioning outer production on Dnous Ytivil pointed to big things to come with its “Just Getting Started” title. He’s since delivered on this promise, rising up alongside the likes of Batu, Asusu, Ploy and Hodge as one of the key figures in the young South West crew reshaping techno in their own low-end heavy, broken interpretation. 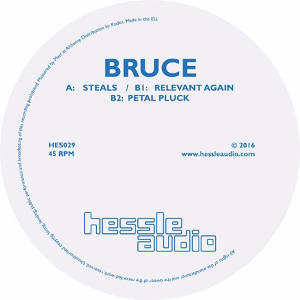 After taking charge of Hessle’s only outing in 2014 with Not Stochastic, Bruce is back with another three-track 12”. Latest effort Steals beats off stiff competition to stand as his finest EP to date, serving up three incongruous aural experiences. The standout title-track interrogates expectations with its structural turbulence. It opens with submerged percussion that sounds like its bubbling up from an ocean floor, until a crisp synth signals the surface has been breached and the muffled background noise dissipates. The drums roll forward with greater clarity, before being halted by an ear-piercing screech and crunch. This moment sounds utterly cataclysmic belting out of a system, with the discordant tones snapping listeners out of any bodily rhythm the percussion has lured them into.

Bruce’s trademark use of silence in the seconds afterwards bolsters the destructive impact, with the absence of sound proving just as jarring as the overload. The bottom layer is then reintroduced, peaking and plummeting between volume levels, and developing offbeat ticks. Muted synths join in, panning immersively from side to side, before bursting upwards as shimmering, metallic clangs. Meanwhile warped textures flicker in and out, mutating wildly in their tiny instances of existence, intensifying the track’s arresting disregard for convention.

B-side cut “Petal Pluck” forefronts a clunking melody which is simplistic in its pattern but tonally complex. Despite the plodding rhythm it sounds untamed as the resonant notes fluctuate between damp steel pan-esque vibrations and high-pitched glimmers. Sparse percussion floats in the shadows, crackling unsteadily to add a dizzying edge. “Relevant Again” is a gloomier affair, opening with bassy undulations and simple percussion. As it progresses, increasingly more mind-bending sounds augment the production. The addition of an airy, indistinct vocal gives the impression of some shaman-led ritual summoning an alien race as the chant-like murmur remains unwavering and monotonous in the face of shrill bleeps and otherworldly groans rising from within.

Hessle Audio’s influence in sculpting the UK scene cannot be overstated, with trends following the bass-driven techno sound the imprint began to push as dubstep faded away. Now as techno continues to divide and evolve away from the 4/4 pulse, Bruce is showing the singular innovation that could see Hessle redefine the scene once again.

A1. Steals
B1. Relevant Again
B2. Petal Pluck