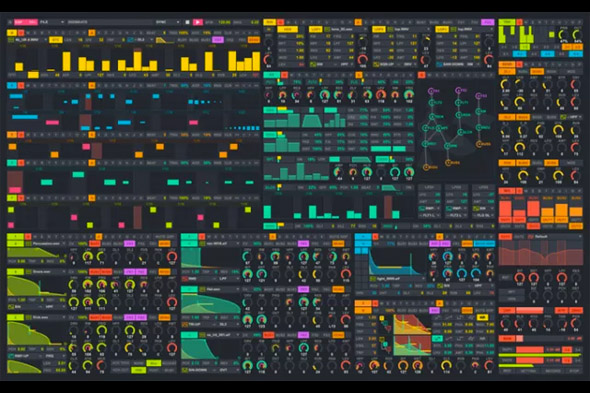 The all-in-one program offers a timeline-free way to create and perform within one screen.

As the unstoppable march of modular synthesis continues, the crowd is surely ever more divided between those who deride the cultish practice and those who fawn after a world of racks and patch cables to dive into. For the latter camp, one of the major pitfalls in engaging with this altogether different kind of electronic music creation is the cost required to get to even a basic working level. Of course modular set ups can manifest in many different ways, from simple one frame set ups acting like a one-off synth in a wider rig through to monolithic self-contained systems that control every aspect of sound without a need for external interference.

Now software developer and musician Yotaro Shuto, also known as DUB-Russell has created a standalone program that seeks to emulate the free-roaming sonic spirit of those purely modular systems in a single screen interface posited as “a semi-modular beat-machine”. At first glance, 2020 seems to be something of a headspin, which already makes it look like the average modular fanatic’s arsenal. However within the fiddly map of different elements that make up this software is the potential to create fully realised pieces without needing to go anywhere else.

Among the devices included are 12 one-shot samplers, two FM synths and a kick synth, a sample slicer, an effect patcher, sequencers and a full consortium of send and master effects. With mixing and recording capabilities contained within, the intention with 2020 seems to be to encourage real-time sound manipulation and improvisation. The project was launched as a Kickstarter by DUB-Russell in March, and has already quadrupled its target with 25 days left to go. To get more information about the details of the program and to pledge towards the project, head here.