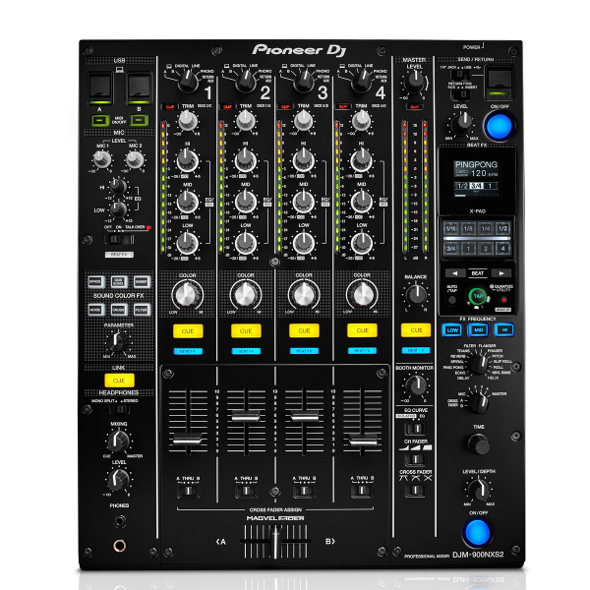 Robin Lee lights up Pioneer’s latest addition to its DJM-900 range of mixers.

Pioneer calling their new CDJ-2000NXS2 and DJM-900NXS2 mixer flagship products is big talk from a brand people already consider an industry standard. Some, though, may be wondering what ever happened to the behemoth DJM-2000 Nexus, a mixing console released to much fanfare at the beginning of 2013. The DJM-900 series, however, have been a mainstay in clubs, bars and festivals for a generation now, even if this four-channel mixer has undergone some permutations.

Being a digital mixer, the DJM-900s have always had a bit of a hard time earning recognition from the analogue purists. In a move to placate them, Pioneer have decided their latest incarnation should switch to a 64 bit processor (from 32) for some extra finely-tuned fidelity. The DJM-900NXS2 also features a reconfiguered placement for the power supply in order to aid noise reduction, new gold plated RCA analogue inputs, redesigned phono amp circuitry and larger ground terminals for easing the workload of integrating vinyl decks into your set up. In fact, Pioneer have included four phono inputs, along with the four CD/line inputs, upgrading from the two found on the previous DJM-900NXS mixer.

Pioneer have considered the wide range of potential users on this new mixer. Let’s take laptop DJs as an example: the DJM-900NXS2 has a pair of USB ports, meaning two users can run a simultaneous connection which cuts down on the hassle during changeovers. There’s even dual headphone ports, like Allen & heath’s Xone-92, in two sizes (ideal for those moments when you realise you’ve forgotten your headphone jack). If you want to control Rekordbox DJ software on your laptop, the DJM-900NXS2 also facilitates this with DVS support. 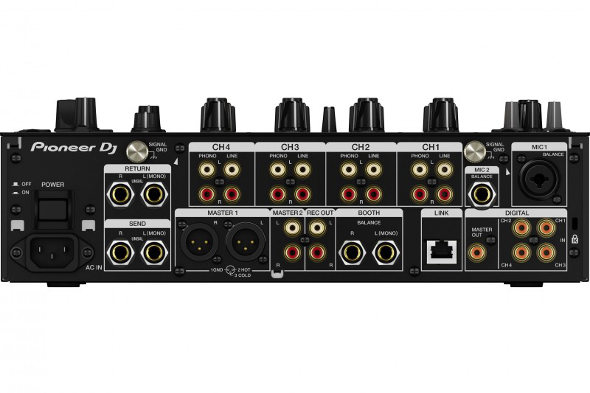 Further signifigant changes can be found in the FX sections of the DJM-900NXS2. Still housed on the left of the mixer, the Sound Colour FX retains the majority of effects featured on the DJM-900NXS2’s predecessor but swaps out the Gate/Comp function in favour of Sweep FX. Underneath these you will find a newly added Color FX Parameter knob which allows further expression and intensity in controlling the effects. Use the cue button to send the effects signals to the headphones during mixes.

Switch your attention to the opposite side of the mixer and the Beat FX section sees further changes employed by Pioneer. The appropriately named Ping-Pong effect will delight fans of panning, whilst the DJM-900NXS2’s Beat FX also includes Helix, Pitch and Vinyl Brake. Changing between different rhythmic parameters is even easier now with the redesigned touch pad, which includes some of the functionality of the touch strip from previous model mixers. Another update is the repositioning of the send and return FX loop that now has a dedicated space on the top right hand side of the unit, and you can connect a physical FX unit via the ports on the rear of the mixer, which includes USB, meaning you use things you’re your iPad.

For scratch DJs there are a couple of new features on the DJM-900NXS2 including an improved channel fader curve that now switches between three levels of attack as well as the EQ/Isolator switch, and cross fader curve found on the previous mixer. Pioneer have also integrated their new and robust Magvel cross fader seen on the DJM-S9 mixer which is designed for battle DJs connecting to Serato DJ. The industry standard is now better than ever.
More info/buy