The Montréal producer is back on 1080p under a new alias for their next 12″ release.

First picked upon by FunkinEven back in the summer of 2014, Montréal producer Adam Feingold made quite the impression with his debut Apron EP which housed three tracks perfectly suited to the label’s aesthetic preference for machine jams dashed with alien electronics. It made for an intriguing departure from Feingold’s past endeavours as part of local psyche-pop outfit The Breezes. Since that Apron record, Feingold has launched a low-key label, Temple, with some friends as well as join the 1080p graduate scheme with a 43 minute cassette of “hazy, jacked techno, spaced-out house and reverberant jungle rhythms” landing on the Vancouver label last April.

Feingold now becomes the latest 1080p associate to transfer over to the label’s 12” series and the move offers him the chance to explore a different sound under a new name. Adopting the title Ex-Terrestrial, Feingold veers off into a ’90s wormhole, looking “back to millennial downbeat realms and naturalist, ambient IDM” as the label puts it. Said to be recorded last summer using mainly the Yamaha CS 1X and some Juno 60, the four tracks on Paraworld can be previewed below ahead of its arrival later this month. 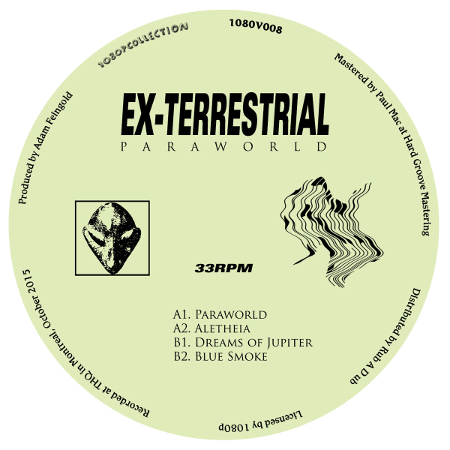 A1. Paraworld
A2. Aletheia
B1. Dreams of Jupiter
B2. Blue Smoke