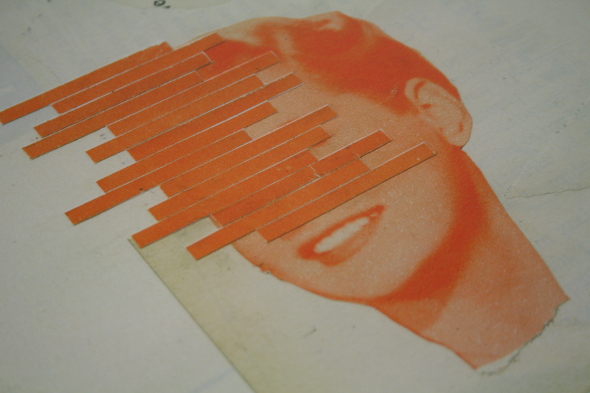 The Contort label operated by Samuel and Hayley Kerridge has focused on quality over quantity since launching last year with the former’s full length, Always Offended Never Ashamed, not to mention limited edition cassettes by legends Karl O’Connor and In Aeternam Vale. They’ve lent a hand to some emerging talent too, like Emanuele Porcinai, aka WSR, with the great Stainless EP and now a new one by Danish sound artist SØS Gunver Ryberg whose compositions have mainly existed in a live context for shows and installations. The only release in her discography thus far being a 2013 Christian Vogel collaboration Moved By Magnets put out by the The Tapeworm.

Ryberg’s music, massive warehouse-sized epics, take on full spatial dimensions, living up to her self-styled preference for transformative physical power. Recent examples of this can be found in the multi-channel concert SØS Gunver Ryberg performed in an old underground water reservoir in her hometown, hammering out enough industrial strength machine funk to fill out an ex-power plant like Berlin Atonal 2014 (a true highlight) or her brave journeys out into the Arctic wilderness to make field recordings. She finds new challenges and seeks inspiration from the outer limits and they bleed through her music. It’s all rather evident on AFTRYK.

The long, hazy drone intro of “Skolzeit” delays a violent barrage of percussion and bleeps, all building to a rather heroic climax of course. “Pantodont” takes on a broken industrial techno workout reminiscent of Perc or Yuji Kondo; grating, breakneck drum programming and savage arpeggios drenched in distortion. “1170 Siva (Bare Bones)” is a rather apt title, here a violently overdriven kick drum bashes away relentlessly beneath an execution of meticulously programmed metallic textures. As much as this is all in harmony with her threshold-pushing sound design, it’s more about the restrained and concentrated efforts which help create tension and atmosphere; a style she returns to on final effort “1170 Siva”. It’s brutal blasts of distortion are truly shocking.

The sheer enormity of the tracks are something like a Boeing 747 passing by no more than a few feet above your head. This collection of cliff hangers instil a sense of trepidation and vertigo but it’s the challenge involved in listening which is most exciting. It may take some repeating for it to grow on you, and for the functional DJs, all tracks are quite difficult to mix, but when they lock, look out! In a moment where the status quo of techno is beginning to sound wonted, Ryberg offers us some refreshing perspectives of a similar sound with a good dose of intellect, some truly innovative synthesis and enough ferocity to make even one of those Mord records pale in comparison.