The Frozen Autumn – Time Is Just a Memory

Maybe the title is true and time really is just a memory; look at what time has done for The Frozen Autumn. Their debut album Pale Awakening had a song on it billed as “This Time (‘80s Song)”. It’s been on my playlists since I first got my hands on the album circa 1999, and I remember at this time thinking, ‘isn’t it all rather eighties-sounding?’ More than twenty years later, Dark Entries – a label largely devoted to unearthing the ‘80s underground – presses The Frozen Autumn onto vinyl, just like all of the ‘80s songs’ it has mastered and committed to wax over the years. As Diego Merletto sings, an epiphanic twinkle in his voice: ‘shadows coming back!’ 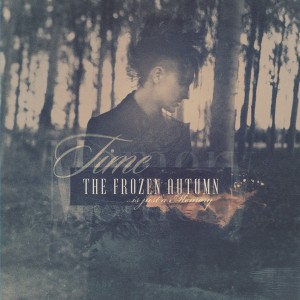 In fact, Merletto and partner in crime Arianna-Froxeanne have been delivering sombre temporal shadows and insistently banging their fingers on drum machines pretty much non stop since their debut. They are wedded to a noble loyalty, the epic echelons of the frosty 1980s and are well known to a goth scene for whom looking back is for life, not just for Christmas. Ripping the Turinese outfit out of one underground and – in a sense – into another, Dark Entries has taken a rich back-catalogue and distilled it into an absolute best of six mighty tracks that show off The Frozen Autumn’s expert and inspired breed of inconsolable synth music. They resonate significantly with some other notables in the San Franciscan label’s output: Clan of Xymox, Kirlian Camera, Victrola all cast more than a shadow on The Frozen Autumn’s stadium-ready yet woefully crepuscular, handsome and typically Italian darkwave.

A delicious introduction to the band for the non-initiated, Time Is Just a Memory follows a narrative thread that leads the listener from the more opaque stuff on Side A to the brighter, dancier material on Side B, all taken from the band’s early output. Minimalism ain’t what’s on offer here. Instead, The Frozen Autumn revel in rich patterns and textures – sampled choirs, bells, the whole show – all layered onto ever-so romantic voices. Their twinkling melancholy synth-lines are chased by swarms of drum-machines and by that quick, silvery post-Marr guitar which got so elegantly stretched by the goth tradition.

A high point is “There’s No Time To Recall”, which remains one of the most satisfying apocalyptic ballads around, despite sounding like Clan of Xymox’s “Stumble and Fall” revisited. However it’s Side B that kills, displaying the seedier, EBM-infused side of the band’s material. “Silence is Talking” is a crazed nightmare with a glorious vocal performance by Arianna-Froxeanne who seems to luminously ‘lift’ the crime-wave soul of the song (if you want more of her also listen to their side project Static Movement). The fatally plaintive “Wait for Nothing” will stay with you for a long time if you’ve ever loved any bent in Italian darkwave from Carmody to L.A.S.’s Crime, or if you’re a fan of stuff like Martial Cantarel or Staccato Du Mal.

The curtain falls on those anthemic ‘shadows coming back’ in “This Time”, which having lived through the CD and the rather unarchival 1990s, can circulate this time without that chain around its neck of being an ‘80s song’, and take its place amongst the most heartfelt, melodic and bittersweet goth-synth tracks of any time.