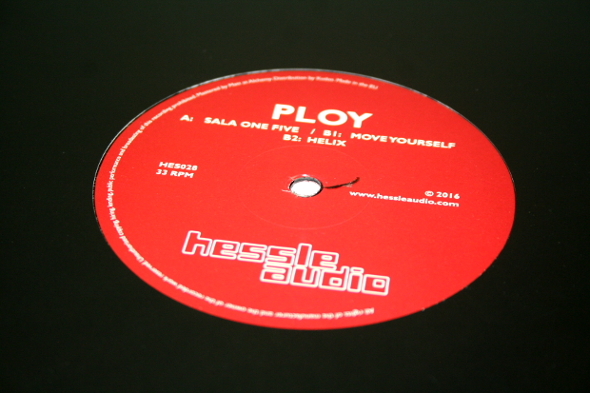 Hessle Audio has always seemed to hone and develop a certain, though undoubtedly diverse, aesthetic, or family of sounds, rather than simply put out tracks and artists enjoyed by the team behind it (who most people are aware of as Pearson Sound, Pangaea and Ben UFO). The discography has always felt like a narrative that is powerfully entwined with the wider happenings of experimental club music, and while it’s not as trendsetting as the days when it released explosive debuts from people like Objekt and Bandshell, that’s not a bad thing. The label is pursuing its aim slowly, quietly and deliberately, releasing music in a controlled manner. Last year was given over entirely to Pearson Sound’s album and extended mixes, after the slowdown in 2014 that just saw a single release – Bruce’s salt-grit bass and dismembered techno beats. 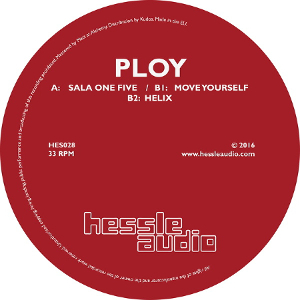 Step forward Ploy. “Sala One Five” switches the record on, powering up immediately and chugging like a vast machine, truly industrial in feeling, seemingly built from cold steel and white silicone. Piston-powered, juddering kick drums, processor hum and fan hiss create the feeling of suction and propulsion, the air bending around the electro-derived rhythm. The synthetic noise and percussion that Ploy uses seem to be mashed into themselves, their frequencies scraping like flint. Similar to some of the Livity Sound output, it seems to offer a glimpse inside the workings of some advanced military technology that’s been hijacked for absurd rhythmic purposes.

“Helix” has a similar aesthetic – this one’s certainly not a dancefloor cut, but it immediately exerts a physical pull in the tidal ebb and flow of its tones and samples, a soothing pulse of subtly melodic mechanised ambience. Again demonstrating a novel and atmospheric use of abstract sound, it’s a soothing blend of textures, with a worried edge in the animated array of stuff happening beneath. It’s hard to isolate exact sounds and work out how it all relates to each other, but it really works, to tense, beguiling effect.

There are more organic forces at work in “Move Yourself”. Loopy and dubbed out, extremely danceable; it’s tempting to call it a twenty-year-later refraction of Mood II Swing’s “Move Me”. A clattering off-beat provides the closest thing to a snare drum, tumbling around a trance-inducing dub techno rhythm. You want to call it minimal but, with its multitude of currents and swirling atmospheric debris, it really isn’t – though it has extraordinary subtlety, immersed in a specific range of tones and frequencies. Ploy’s masterful use of tape echo and filter-shaped static hiss once again provides the hidden power, whooshing around the rhythm like an exhilarating inhalation, while the slow-flowing bass seeps and emulsifies. When you properly tune in and ride the bubbling motion, a potent mix of up and down energies, it’s as mystical and intense as Levon Vincent’s best work, and a sublime demonstration of groove power.