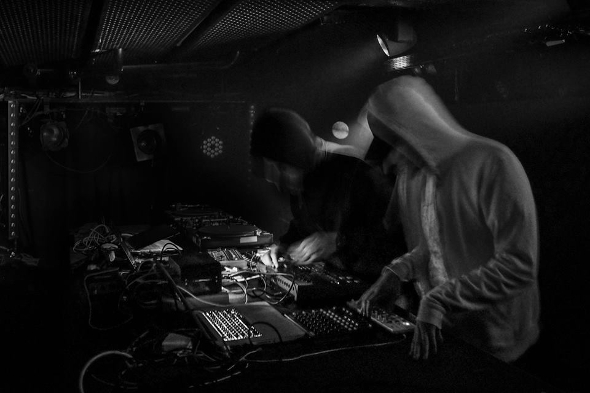 More cuts from The Trilogy Tapes graduates will arrive through their newly launched RZ label later this month.

There was more than a frisson of excitement and speculation when Rezzett first emerged in the online ether through a series of scratchy YouTube videos featuring their frazzled, blown out hardcore midway into 2013. With their identities still under some semblance of wrap, Rezzett have found a welcome home on Will Bankhead’s The Trilogy Tapes; the perma-hooded pair have supplied the label with four 12″s over the past three years along with a superb cassette recording containing two live performances. They also remixed Syrian icon Omar Souleyman for one of the first joint 12″ releases from TTT and skate brand Palace.

With an increasingly active live schedule, which includes sharing the bill with Tim Hecker at Hackney venue St. Johns in May, Rezzett’s profile looks set to rise higher this year. Adding to this is news of a new label from Rezzett, with the snappily-named RZ set to be inaugurated by a 7″ entitled Rupez later this month. Perhaps mindful of the format, the two tracks on the 7″ offer a more experimental and less speaker-blowing side to Rezzett if the available soundclips at Honest Jon’s are any indicator.