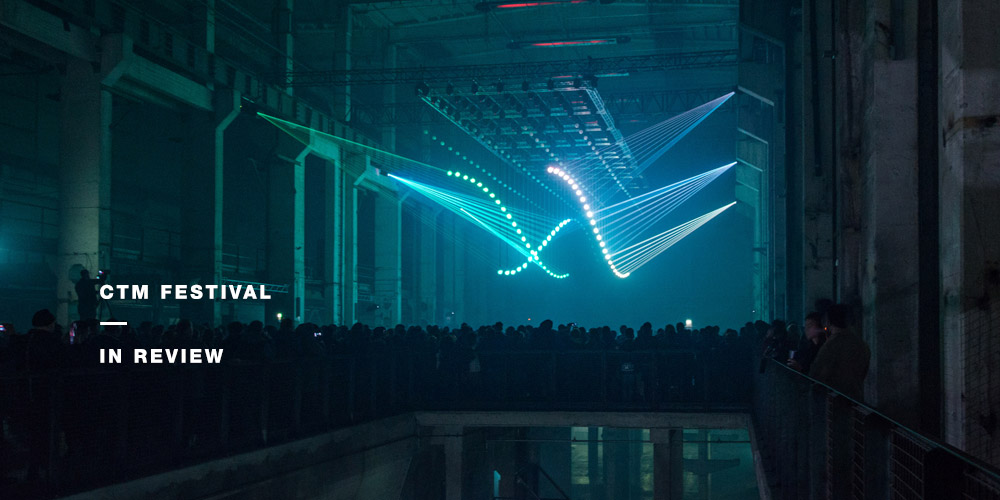 The main hub of CTM 2016 focused around Kunstquartier Bethanien in central Kreuzberg. It being host to week-long lectures and forums as well as the impressive Seismographic Sounds: Visions of a New World, ¬Ýan exhibition that ran all week featuring, among many others, an enormous display of visual arts contributions and installations by the likes of Pedro Reyes (Mexico), Tianzhuo Chen (China) and Svetlana Maras (Siberia),

Meanwhile, on the other side of the building during a pre-opening party, a small lecture room was turned into a makeshift club space. It played host to Moscow’s Olga Maksimova, aka¬ÝOMMA, a tremendous DJ whose fine selections of deep, lo-fi house grooves were real delight. She was supporting Ewa Justka of Poland – who delivered a dynamic live, pure voltage set of harsh, textural abrasions – and Create Digital Music editor Peter Kirn’s gorgeous and glistening ambient soundscapes.

After having to endure Oliver Baurhenn’s fuddled and poorly planned opening speech, there was a special preview of French film-maker Vincent Moon’s Rituals, which explored global insights into musical and cultural pursuits of trance states. Running all week long, his installation at the HAU 2 explored these themes further in an AV display across three screens running simultaneously. But the main drawcard for tonight was the ensemble performance by this year‚Äôs co-curator Rabih Beaini with the world premiere of “For The Right Red Hand”. It featured an eight piece ensemble that explored cross-genre and multicultural sound explorations in a state of disharmonic yet organised chaos. Beaini manned the mixing desk and conducted the group while while two drummers went head to head alongside a variety of string and wind instruments, it was a dynamic opening. 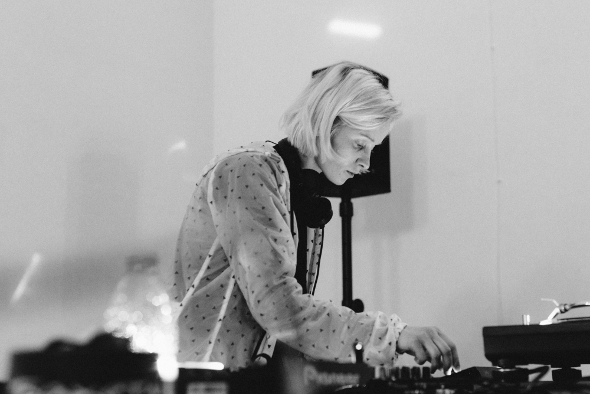 The lectures and panels at the Kunstquartier brought forth some inspiring discourse from some truly great academics, artists and thinkers, both local and internationally. Particular highlights included Current Voices from the Middle East featuring Sublime Frequencies main man and loveable misanthropist Alan Bishop and Cairo’s Maurice Louca, whose electronic/rock crossover performance and collaboration with Bishop as Dwarfs of East Agouza at the beginning of the week were real highlights. They touched on the ebbs and flows of culture in the Arab world, Egypt as the region’s cultural engine, the current state of music in the Middle East, and the dangers of alternative music being appropriated again like indie rock in the ’90s.

Those fortunate enough to catch the screening of ‚ÄúBeats of the Antonov‚Äù by Hajojj Kuk, featuring a Q&A afterwards by the film’s ethnomusicologist Sarah Abunama-Elgad gained an insight into the current crisis faced by minority tribes in South Sudan and their fascinating traditions steeped strongly in music and dance. A touching and emotional feature, this documentary can only be shown outside of Sudan as their government considers it to be a propaganda film.

Emerging digital perspectives within electronic music were covered by British critic Adam Harper which made for fascinating insights, particularly when discussing the need for a ‚Äúnew sincerity‚Äù with emerging artists using the digital world to promote themselves. He was later joined by a panel including the hilarious FOKN Bois from Ghana and Egypt’s Angie Balata. They discussed their struggle against ‚Äúreligious sound pollution‚Äù and dissent moving from graffiti to the new frontiers of the internet.

Elsewhere, current politics in sound-art were examined with a panel featuring Anyte Greie-Ripatti; a captivating part of the presentation regarded her time involved in the female:pressure collective and their plight to bring attention to the female freedom fighters in Rojava, Western Kurdistan. Furthermore, British author Marcus Boon’s perspectives on the contentious issues of cultural appropriation and exoticism in electronic music, alongside the politics of vibration (as told in his book of the same name) were equally fascinating. 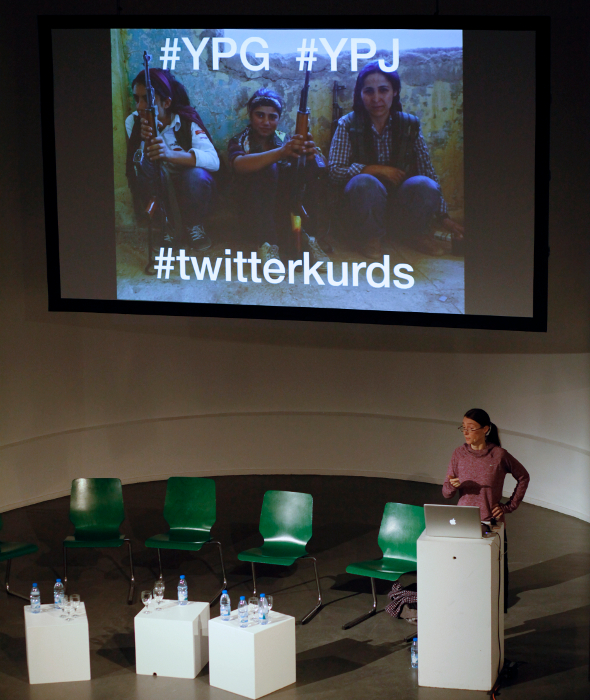 Midweek festivities saw American drone metal icon Stephen O’Malley collaborate with the awe-inspiring Hyperion Ensemble (led by founders Ana-Maria Avram and Iancu Dumitrescu), easily some of the most challenging and polarising performances of the week. With restraint, mastery and impeccable execution, the ensemble’s dramatic and suspenseful chamber music ricocheted throughout Berghain. O’Malley joined the ensemble for a second chapter adding his trademark electric guitar sound into the mix, but it was his solo performance afterwards which is why many were there.

Although the venue’s infamous in-house sound system would have been more sufficient for the job, it was O’Malley’s custom array of amps and cabinets that provided him with his trademark sound, and it took 45 minutes to setup. He did, however, bring enough horsepower to fill out the cavernous warehouse space. The raw power of volume and vibration (where were you Marcus Boon?) emanating from his rig, the wall of noise blasted with brute force from the same chord played endlessly for a hour through layers of feedback, overdrive and distortion; it was the first time I had ever thought about wearing earplugs at Berghain. It was an oddly spiritual experience.

Over the week long extravaganza it was undoubtedly the audio-visual presentations on display that were some of the most resounding. Russian duo Love Cult presented their collaboration with film-maker Alina Fillipova in Kreuzberg’s stylish HAU 2 theatre space. The piece, entitled Nada, presented vivid, art-house visuals of young and disaffected Russian youths venting frustration in abandoned warehouses in a bleak, provincial backwater of post-Soviet-lifestyle Siberia. All the while Anya Kuts and Ivan Zoloto’s pulsating electro-noir provided the perfect soundtrack to her bittersweet coming of age tale.

The next night Berghain held host to GAD Technologies, the CTM RadioLab Commission by MBJ Wetware and J.G. Biberkopf. Accompanied by two screens, Marija Bozinovska Jones’ immense visuals were projected over the duo for the entire performance. Visuals swapped from Olympic swimmers and industrial futurism aesthetics to Second Life-style virtual reality landscapes. As bizarre a combination as that may sound, it somehow remained consistent in its delivery and captivating, no less. All the while Biberkopf’s immaculate sound design – field recordings merging with post-grime tendencies – created a self-described ‚Äúaudio theatre‚Äù with a sci-fi soundtrack aesthetic which was quite a trip.

American Anna Homler’s Breadwoman character (a woman of elderly appearance with ¬Ýa face full of dough played by Natsuko Kono) was revived for CTM 2016. Her performance art piece, which some of you may have read about in recent times, is due through no small part of RVNG Intl.‚Äôs reissue of her 1985 album Breadwoman & Other Tales. Surrounded naturally by bread loaves and flour dispensers, she engaged in a series of peculiar and entertainingly bizarre acts such as mimicking a baseball slugger aiming for a homerun, some funky slow-motion dance moves (while balancing a dispenser) to all round acts of loveable strangeness.

Accompanied by Homler herself on vocals, she sang with a captivating and powerful range in her exotic, new language with sound effects utilising found objects such as rubber gloves, balloons and toys among other objects. She was accompanied not by original collaborator Steve Moshier, rather UK experimentalist Steven Warwick aka Heatsick, whose Casio keyboard was processed by effects, as well as adding some of his own peculiar vocal drones, creating a gently mysterious and hypnotic musical accompaniment.

Thursday’s extravaganza at Berghain entitled Zones III was one of the highlights of the entire festival. Walking into the sensory shock of Tara Transitory’s (aka One Man Nation) extreme noise terror was accentuated by the ballistic strobe light treatments, almost enough to incur a seizure. Her textural treatments in satanic sound and brutal bass frequencies truly pushed the threshold, triggered by motion sensors and conveying the grey area sounds of her stateless, genderless and identity free republic. In her words: ‚Äúexpression against the pre-fabrication of culture‚Äù. Soon after Aisha Devi, ever the show woman, delivered a dynamic live performance of¬Ýrich vocal chants that rode high over her esoteric arrangements of¬Ýelectronics danced to on stage by Chinese Butoh dancer Beio, truly mesmerising. Featuring the support of Tianzhuo Chen’s¬Ývisuals of avant-garde psychedelia too, what we saw¬Ýreferenced an array of religious symbolism; Magick, Sadhu ritualism, androgynous clowns and dwarves.¬ÝIt’s not often you witness something like this.

I was back at HAU 2 the next night for one final time to see New Zealander Olly Perryman, better known as FIS, perform alongside Maori musician and anthropologist Rob Thorne. FIS’s harsh and abrasive soundscapes were full of field recordings, presumably from his homeland; gail force winds, rustling leaves, trees falling. Furthermore, the sound of metal gates shutting violently were contrasted by the sound of native wildlife swimming eloquently through water, while blasts of noise and feedback were accentuated by effects on the mixing desk. Thorne’s native instruments such as p≈´kƒÅea, (wooden trumpet), p≈´t≈çrino (bugle flute) and p≈´tƒÅtara (conch shell trumpet) and another instrument like a horizontal yo-yo which made a ‘swoosh’ sound were manipulated too, creating wild sounds and textures. It was a fascinating combination of the synthetic and organic, working in prefect synchronicity to celebrate their country’s native roots and culture. 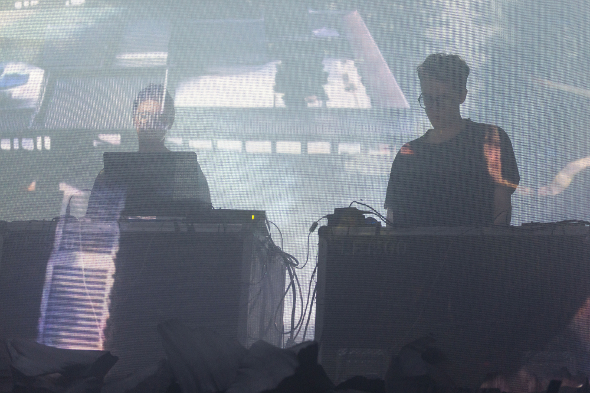 The second Saturday’s festivities took revellers to CTM’s old stomping ground, the former Maria am Ostbanhof now known as YAAM. Situated near the iconic East Side Gallery on the River Spree, it was a rather ideal venue for the night‚Äôs eclectic programming. The main room saw performances by hyped Berlin electro-pop duo Easter while the woozy vibe of the second room witnessed a brilliant closing set of smooth and sultry deep disco by Disco Halal pranksters Moscoman and Delfonic. But for most punters it was the long darkened corridor of Room 3 which played host to a brilliant, depth-charged warm up by Denmark’s Tobias Lee aka Why Be and man of the moment Rabit. His hour of power started off with a harsh electronics intro, sounding not too dissimilar to Whitehouse, before soon venturing off into grime, trap and hip-hop. But for many it was British icon Mumdance’s set of grimy street level beats and bass that was the highlight on this particularly brazen night of debauchery.

Panorama Bar certainly was a hotbed of exceptional music curation too, and if there was one thing this legendary room has taught us‚Ä¶ It‚Äôs all about the warm up set. Legends of the artform such as Bill Brewster or Craig Richards alike would have been proud of the way DJs who played there built the vibe over several nights. Highlights from Pbar included the opening party’s stellar performance by Norway’s Charlotte Bendiks, hitting the spot with a fine selections of acid, tribal and deep house classics, while Borusiade from Romania dug out some raw and gutsy EBM selections and electro with attitude and had the room heaving uncontrollably on Friday. Furthermore, Belgium‚Äôs Nkisi, proved that every now and again the room does in fact require a 130 BPM blowout.

Over nine days, CTM was sure a test of endurance.¬ÝThe sheer variety on offer was quite exemplary and the information overload with the intense auditory and sensory explorations had certainly left me a bit disoriented, but inspired no less. Rabih Beaini as guest curator feels to have worked, with our traditional musical perspectives challenged, but it went well beyond that; encouraging thoughts and discussion that gave deeper insights of our cultural consumption in the modern age.